"The loco was fine today on the fire & drive – the motion was cool at the end of the day and nothing was loose.

There is a new snagette. There’s a pin-hole leak in the left hand condenser pipe above the ‘T’ cock on the first bend. I’ve isolated that condenser by turning the ‘T’ cock (it moved remarkably freely) and made a note on the defect card. Carpo is aware and has a plan for fixing it sometime in the future."

Saturday 1st August
Only Gil and myself turned up today, and Gil buzzed off to Winchcombe before tea break!

Sunday 2nd
Carefully arranging a bike ride via Todders, I was able to slap a coat of Deproma (primer) on 6 of the 11 chairs currently in the production line, and then pedal off over the hills and far away.

Message received from GWSR:
" When your engine came on shed yesterday … the left hand pony axlebox and axle were warmer than they should be. … it appeared low on oil again.

Stephen Burnett had a look whilst Jeff Lacey refilled the axlebox and discovered some of the fresh oil dripping out of the axlebox. It would appear where the underkeep has been repaired, we suspect in BR days, the bronze welding/brazing is failing and allowing oil to creep out.

"The view is that the underkeep needs to be taken out and examined. Ian C has access to the pattern for the underkeep so if as we suspect you may need to replace it then he can arrange the loan of the pattern. It may be a short term fix can be done so as the replacement underkeep is done at the end of your operational season."

Monday 3rd
I had to go to Todders to give a Lighting-Up Course training to John H [Loco Dept], so took the opportunity to have a butcher's at the underkeep.  It was still dripping oil, leaving a large puddle thereof on the ground!  Clearly there is a serious leak.  The underkeep has very visibly been bodge-mended at some stage in its life.  Maybe it leaked before?  Maybe someone tried to fix it by brazing strips on its bottom?  Whatever; it looks a mess and is operationally not acceptable.

Wednesday 5th
I arrived to see 2807 chuffing down to the coaching stock … bit of a disappointment.  Why?  Because, once again we've come to fix some issues and can't as she's in use.  Three new issues have been logged:

Bruce & Gilbert spent the day trying to sort out the problem of our steam heating hose.  The new hose is wider internal diameter (believed to be BR standard) than the old one that burst (believed to be GWR standard).  However, 2807's coupling that connects to that on the coaching stock appears to be of the larger internal diameter.  Quite how the thicker hose was ever managed to be fitted onto the coupling defies us! 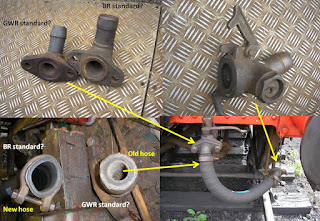 The main problem is the incompatibility of the connectors.  Not only do they require different diameter hoses, but the bolt holes are slightly differently spaced, and the GWR style is recessed for a seal, whereas the BR style has a raised ring (and the recess must be on the on/off valve).  B&G buzzed off to C&W to look for a part that is a hybrid of GWR & BR.  Not unsurprisingly, they couldn't find one.  In the end, Rod [workshop] has offered to modify a BR one to fit our GWR valve.  Thereafter, we can use BR standard hoses!

Meanwhile, Dixie and I took down our noticeboard (from in the car park) because lots of the photos had become unstuck.  I think that the double-sided sticky tape that I had used must have become life expired.  So, we re-attached the photos and replaced the noticeboard.

John G painted a number of BR(W) and GWR rail chairs in Deproma (primer/undercoat) ready for the next coat.

We were anxious to know when we could gain access to our engine (!) and start upon some of the outstanding niggles.  Carpo very kindly put his mind to a plan and worked out a schedule for the use of 2807, and hence when we could get at it!

2807 will have to act as standby loco (in case of another failing) until end of September, but then we can have a hooley.