We had thought that 2807 might be on standby for the Christmas Cracker gala at the end of December.  But it now looks as though 2807 will be running on both days.

Details on the GWSR web site at:
http://www.gwsr.com/planning-your-visit/2013-events-calendar/christmas-cracker.aspx

Let's hope it stays that way!

Wednesday 11th
No new adverse comments against 2807, having operated on Saturday and Sunday last weekend.  I say "adverse", because there is a comment that the nuts remain tight on the tender brake hangers.  GWSR insist that the hangers must have split pins in the end of the suspension bolts such that there is no chance of the nuts coming loose and dropping off.  meanwhile, they have to be inspected weekly.  They're fine!

Gilbert, John-G, Colin & Ann were working on the siphon.  I was finishing off some boot scrapers.  Then I decided to attack some of the rail chairs that are heavily contaminated with ancient grease.  I managed to chisel it off 5 during the afternoon, and then apply the rotary wire brush to get rid of the last bits.  These, of course, got their own back on me by showering my face, coat and shoes with oily black specs.

Saturday 14th
Rain was threatened for the afternoon, so I started on cleaning rail chairs.  However, David was already underneath 2807 doing more welding to the new ashpan bottom.  The loco had been used last weekend, and all was well.  David wanted to add more weld to the new lower portion on the outside.  This is extremely unpleasant, because he had to stand in the pit beneath the loco and weld upwards.  Furthermore, he added a strengthening angle-iron across the edge of the damper door opening's bottom to reduce the likelihood of the base bowing (which it had before).  This was an all-day task for David, with Gilbert initially giving a helping had (or moral support).

Bruce joined me, and together we cleaned up 14 rail chairs ready to convert 12 of them into boot scrapers.  The other two?  Well, beneath the inch-thick grease on one of them was an 1899 Midland Railway chair which I thought we might sell as-is via eBay, or something; the other is a Swindon-made GWR chair of some age (not sure of date of manufacture, as it only says GWR & SN & 92).

There was a huge pile of "raw" chairs, some covered in grease and most with bolts through them (that needed cutting off).  John decided to tackle this pile, and with Gilbert helping, every one of the forty-plus chairs was de-bolted and stacked neatly ready for prepping.  What a fantastic effort.

We also did some tidying up around our TPO (and I half-inched a July 1942 LMS chair from a nearby sleeper!).

2807 is in service on Sunday - this is her last official service.  She may then be in service on 29 & 30 December, but might just be held as standby loco.  2014 timetable is available on GWSR web site:
http://www.gwsr.com/planning-your-visit/2014-timetable.aspx

Wednesday 4th
Geof has been taking it easy, helping Fred & Ray restoring the siphon van.  Geof has been painting (which is considerably better than panting, which he had been doing when working on the loco lately!). 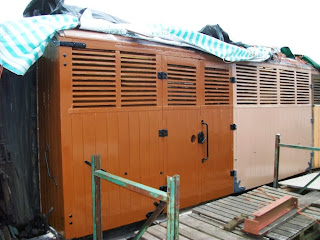 There was a bit of a rush on, as 2807 was to be in service this weekend ... and the ash pan was not yet completed! So, David settled down inside the firebox and spent all day welding in the new sections, especially the damper door surround (when I left, the damper door was still not fitted). 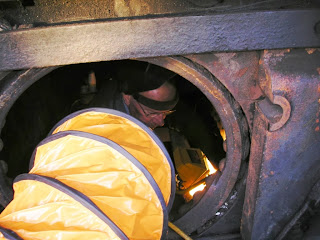 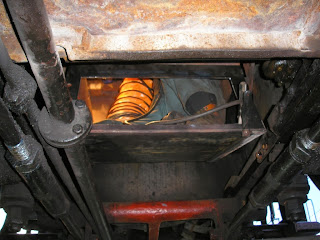 Gilbert was under the loco (in the pit) assisting David, and preparing to refit the damper door.

Bruce began by acting as "gopher".  For example, he cut off part of the head of two bolts, which otherwise would not fit into their holes in the ash pan due to being too close to something that was in the way.  Thereafter, Bruce assisted the boot scraper cause by cutting off bolts from some of the chairs in the pile. 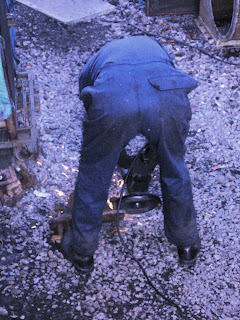 John Mayell popped in, just to buy another boot scraper (a black one, this time).  He was working on P-Way, so couldn't stay.

I applied an enamel coat to the stock of part-painted chairs, building up the supply while the going was good.

Sat 7th
I was delighted (relieved!) to see 2807 at the head of the coaching stock as I arrived at Todders this morning.  Also, she sounded great when she stormed off down the line at 10.30 (presumably straight through to Cheltenham to pick up the first load of Santa Special people).

Understandably, I was the only one working (in our group) at Toddington today.  Gilbert did pop in for a cuppa - he really wanted to speak to Rod in the workshop, but no sign of Rod.  Gil said that he, Fred, Colin & Ann were all working on the siphon at Winchcombe.  Later, Stu popped in to return sales stock, he having spent the morning at Toddington Village Hall for their Xmas sales day.

So, I painted the lettering on a multitude of chairs and then stained 9 brushes in anticipation.  Tim Pickthorn was using our TPO to show a couple of chaps how the buck-eye coupling works (I heard someone fiddling outside & went for a butcher's).  Mark Young was hurtling around in the fork-lift truck, clearing up anything that didn't look as though the owner would miss it - there is a small quantity of staging that belongs to us that could do with moving round the other side of the TPO and tidying.

Sat 30th
I arrived earlier than normal, at around 9:30.  But still not early enough to beat David.  David was already setting up to start welding the ash pan.  Gilbert and Bruce arrived shortly afterwards, and a little later we were joined by Mike. 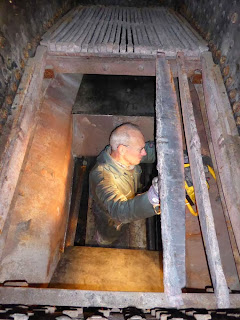 It was a beautiful sunny day, a little chilly, but still the sort of day when it's a pleasure to be outside.  Which is fortunate because 2807 is over the pit in front of the David Page shed.

For the first few hours we were all involved in work on the ash pan, but also periodically distracted by a yard shunt that was going on.  The crane that has been next to the TPO for some years is no longer there.  It has been replaced by the Cotswold Diesel (owners of the 45 and 26) coach.  Of course, while the crane required no specific access, we have become accustomed to storing our 'stuff' (mainly rail chairs awaiting processing into boot scrapers) against it.  This changes now because the diesel guys will need access to their coach, and so some of the chairs had to be moved, with possibly more to be moved at a later date.  In addition to this our water supply is shared with the diesel guys' coach, and so this had to be changed as well. 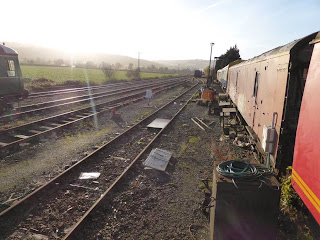 It seems that some of the reason for the move around is to make space for the arrival of un-restored 28XX no. 2874.  Apparently she will be taking up residence just about in the position that 2807 occupied for so many years.  That's going to be a bit odd for those of us who were involved at that time.  If we give them a blue plastic bag to put on the chimney, which was a 'feature' of 2807 for many years, then it will feel very weird.

Anyway, back to Saturday,Gilbert checked the loco roster and discovered that 2807 is due to be in service on Saturday 7th and Sunday 8th.  This added an element of urgency to proceedings!

Bruce was preparing the ash pan plate for the front of the rear section - the plate that the damper door is attached to. 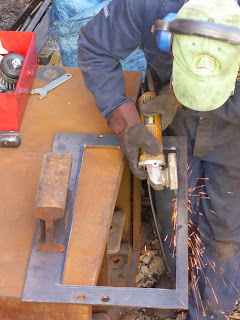 Mike and I turned our attention to completing the reinstatement of the valve cylinder front ends.  The RHS was pretty much there.  We'd fitted the front cover and rod cover a few weeks ago (16th).  Since then the LHS has been measured and rectified, and the front covers loosely fitted.  Mike and I fitted the RHS front cladding and insulation.  A tricky job in the confined space available.  Then we tightened the LHS front covers.  This brought us to lunch time.

After lunch, unfortunately Mike had to leave, as he'd been in early in his role as loco cleaner.  So I fitted the LHS cladding and insulation.  Then Bruce and I fitted the running plates, flap, and lamp bracket - two man jobs because of the round-headed bolts.

David and Gilbert continued with the ash pan work.  The rear plate was welded in and then the base lowered back into position. It had been lifted to the front part of the firebox, as it was felt if we removed it completely then it might not be possible to get it back in again with the back in place. The floor was welded across the back edge, securing it to the back section. It now remains to weld the sides of the base, then weld the door plate in position and reinstate the door and operating lever. David will be coming on Wednesday to complete the welding for the loco to be in service on Saturday. The air extraction system, purchased by us on behalf of the railway proved very effective.

And finally - Christmas is coming! 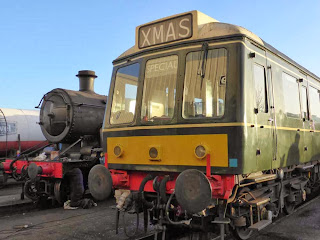