Wednesday 17th
Gilbert and Brian arrived and then went off to speak with Graham, who is drawing up the plans for the next ashpan. The current one we had made with hopper doors - sounded a good idea at the time: makes it easy to drop the ash out at the end of the day. It didn’t work; that is to say, it caused more trouble than it was worth and eventually we welded in another floor over the top of it. Also, in practice we overcame a difficulty in raking out ash from the rear section by lowering the floor of that part, thus enabling a rake to get inside and be operated more easily.

When they came back, Gilbert volunteered to clamber inside the firebox to verify some internal dimensions applicable to the ash pan. 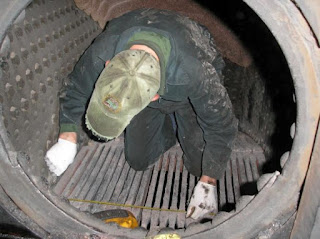 The weather today was rain … all day. With 2807 in the shed, Bruce was able to work on the safety valve spacers. The valves lift at about 210 psi instead of the expected 225. Speaking with Carpo, he pointed out that the boiler is pressed for 225 psi which actually means that the pressure must never exceed 225 - it doesn’t mean that she blows off at 225. In fact, it is probably best for the safety valves to lift at about 220 psi. Then even with the blower on and a roaring fire, the valves should prevent pressure rising above 225. 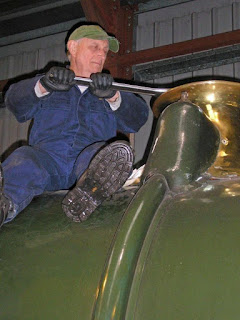 Bruce has calculated that one psi difference is the equivalent of about 3.5 thou’ on the spacers. So, he has taken them off to shave 5 psi’s worth off. We can see what the difference is when she’s next in steam. 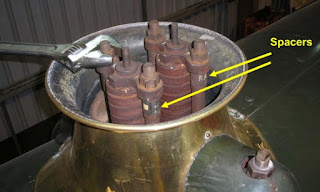 Bruce has also modified his design for the guard irons on the back of the tender. The new design has a two-part guard that bolts together. This has the advantage that the lower section can be replaced if, for example, when the tyres wear the guard iron becomes too close to the rails. Carpo gave his blessing to the revised design, so Bruce will now purchase the materials.

I spent most of the day applying the enamel top coat to the boot scrapers in production.

The biggest laugh of the day came from Roy [Loco Dept], who I had been training for fire-lighting. Often you have to clamber into the firebox and get the ash out by lifting a couple of fire bars and raking the ash through into the ash pan. I made a hook for sliding between bars and lifting them up. Roy had found a length of material to make himself one, and he popped in at coffee time to verify that it was suitable. When he departed, he turned the handle on the outside of the van’s door. When we came to leave, we couldn’t get out! The door is of the type with a handle only on the outside. To turn it, you have to lower the window (using a leather strap) and reach outside. However, the windows have been screwed up and can’t be opened! There was no way to open the door or to access the handle to turn it! We were stuck inside! I had to ‘phone a friend’ and ask him to rescue us!!! 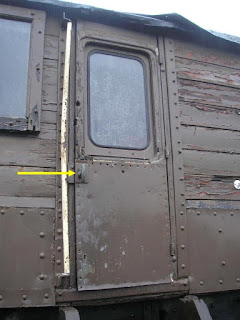 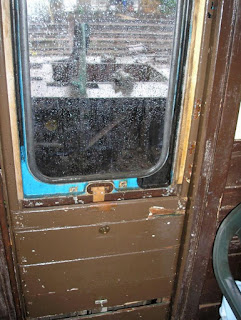 Saturday 20th
2807 was next to be in service at the gala (27th - 29th May). However, the connections on Dinmore Manor’s new tender had not been completed in time, and P&O was failed, which left just Foremarke Hall and 2807 to hold the fort over the weekend!

Bill valiantly soldiered on with the restoration of the siphon van at Winchcombe. He was applying bitumen paint to one of the bogies - all on his own! I was on crossing duty at Winchcombe station, but Bruce and John T turned up and were working at Toddington. It was a real ale weekend, and there is a great reluctance to work ... not because of the beer available, but the fact that you have to park in the field and walk down to the yard on event days!

Graham, on 2807’s footplate, reported that the safety valves are lifting at just before 215 psi. This is with the spacers removed (to be shaved a little) but retaining nuts in their former positions.

Towards the end of the day, the driver found Bruce and gave him a rubber seal, and asked him to fit it in the front steam heating hose. Bruce had a go, but it was not trivial; he ran out of time.

Monday 22nd
P&O had been fixed and was having a warming fire lit in anticipation of a steam test on Tuesday. Dinmore Manor was back in one piece and being prepared for service this week.

Wednesday 24th
Having shaved off 17 thou, Bruce began by fitting the spacers back onto the safety valves. They are only in temporarily, but the nuts on the top of the spindles are the important ones. If the valves lift at or about 220 psi, they will be fitted fully. 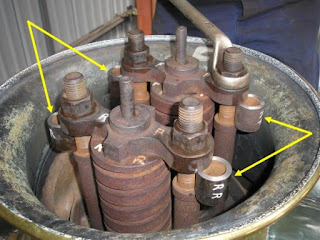 Bruce had another idea - why not replace these spacers with a pair of nuts? Adjusting spacers is a fiddle, and if you shave too much off, then you have to make new ones. There is enough thread on the spindles to accommodate a pair of nuts (locking nuts), and these would be a lot easier to adjust.

Job done, Bruce returned to the steam heating hose. He made a small scraper tool to get the remnants of the old one out of the ridge, and then with the help of several people, Alex (I believe) finally managed to get the new one in place. 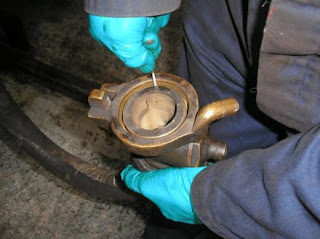 Meanwhile, John G was working on the boot scraper production line, applying a first coat to the tops of those that John T & Bruce prepared on Saturday. At the other end of the production line, I was applying gold to the lettering and fitting brushes.

There was the one new issue reported (and cleared):
19: Steam heat bag [i.e. hose] on loco is missing the rubber seal. [q.v.]
Bruce cleared issue 7 which reported safety valves lifting at 215 psi (instead of 225).

Finally, the Cotswold Steam & Wildlife Preservation Group ended the afternoon with a session of rabbit spotting. 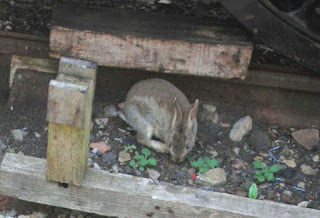 This weekend is Gala Weekend. 2807 is due to be in service. Parking is on the field, again. Some of us are on duty elsewhere, so I think we all deserve the day off!

Wednesday 10th
Gilbert popped in, but toddled off to Winchcombe to help Fred on the siphon restoration because there is little to do on 2807.

One new issue has been logged. Here is the list of outstanding issues and their status:
1 J cocks are stuck [A last-year’s issue: Probably in the cab; in ‘open’ position]
2 LH front & rear top mud hole doors & right-hand top blowing [Marked as “Monitor”]
7 Safety valves lift at 215 lbs [We will verify and adjust at next wash-out]
12 RH piston gland packing blowing [This is not a significant leak - Monitor]
18 L/H clack valve/injector steam valve blowing slightly [We’ll take a look when she’s next in steam].

Chaps from the Loco Dept, supervised by Brian, cleaned out the grate and the smokebox. They also cleaned the bottom half of the loco including the motion. 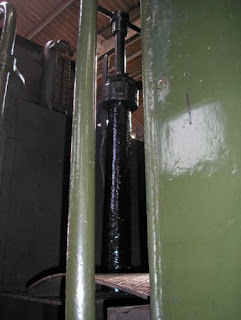 Brian cleaned up the water scoop column because the fracture in the casing became visible again. Bruce re-painted the column.

John G wire-brushed the queue of rail chairs in the boot scraper production line, and Bruce painted their bottoms. 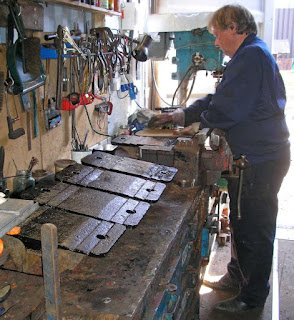 I finished off a load of boot scrapers - painted the lettering on them and fitted the brushes.

Bruce & Brian joined in as Dinmore Manor attempted to weigh their new tender. The usual amusing discrepancies arose: how can it be heavier one side than the other; how come the weights change when you run it up & down the track and weigh it again. 😊

Well, I did some painting of chairs and cut up a multitude of wooden wedges for the boot scrapers (to hold the brushes in place). Pete and Alex from the Loco dept cleaned 2807’s grate. Pete reported that there appear to be a number of stays weeping; ditto at the corner patches, and one tube could be partially blocked.

Meanwhile, I had done some investigation of the historic report of “J cocks stuck”. I found out which ones … and, yes I couldn’t close them. 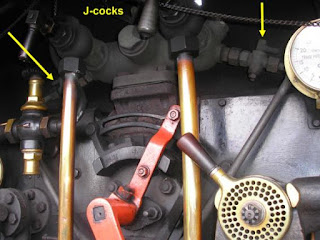 Wednesday 3rd
At last, the engine stood still long enough for us to address some of the issues!

Brian seemed to be in “management” role, as he supervised Tom, Alex and Gwen who were cleaning various bits on the loco. 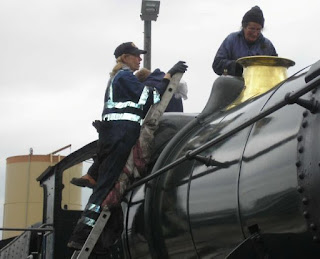 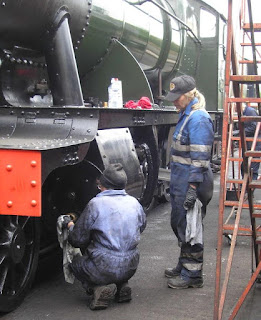 Brian also gave a brief report on the recent visit to Llangollen, which is one of the places under consideration for the boiler overhaul in 2020. It was interesting to note that they are already booked up for boiler work until the beginning of 2020! Brian also examined the leaking ash pan sprinkler, where it became apparent that the delivery pipe had sheared where it passes into the ash pan. This may have been the result of expansion/contraction stress.

Gil told me that Tom and Roy from the Loco Dept had cleaned out the drain cocks (which had allegedly stuck at one point last week).

Bruce examined the spring that has been reported as possibly broken. Clive had also taken a look, and it does not appear to be broken, but we will keep an eye on it. Bruce also investigated the alleged oil leak from the pony truck. His view is that it was most likely over-filled, and it is designed to dribble oil down the horn guides, which may have triggered the report. The oil pot was full, and no sign of leakage. 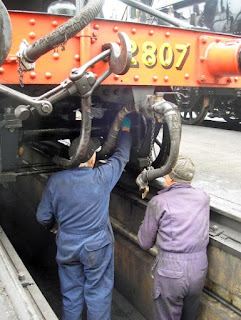 Bruce had another bash (literally) at the balance weights on the driving wheel to make sure they are as tight as is possible. 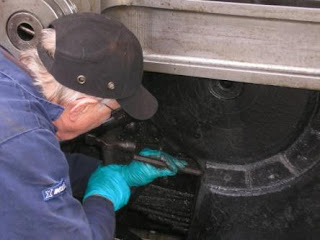 Also, he’d been calculating the adjustment required on the safety valves to get blow-off closer to the 225 mark (as they currently lift at 210).

Clive replaced the broken spring in the flange lubricator.

I was also working on the boot scraper production line for much of the day, apart from assisting PWay with the cutting of some rail for a customer.

Here is the list of issues:
1 J cocks are stuck [A last-year’s issue: We never did find out which J cocks were stuck …
I decided to cross it off unless/until a clearer report is given in the future]
2 LH front & rear top mud hole doors & right-hand top blowing [Marked as “Monitor”]
7 Safety valves lift at 215 lbs [We will verify and adjust at next wash-out]
8 Top front left hand mud hole door weeping [Repeat of 2]
9 Top front right hand mud hole door weeping [Repeat of 2]
12 RH piston gland packing blowing [Gil reckons that this is not a significant leak]
13 LH pony axlebox losing oil but cool at the end of the day [Suspect driver mistaken]
14 Mud hole door RHS of firebox leaking [Repeat of 2]
16 Suspect broken leaf in LH trailing wheel [spring], 3rd or 4th leaf down. [Not broken, but will
monitor]
17 RH trailing flange lubricator spring broken. [Repaired]

Saturday 6th
2807 was on the Fire & Drive on Friday, and continued in service today. Only John T and I were at
Todders, and there was little to do apart from boot scraper production. 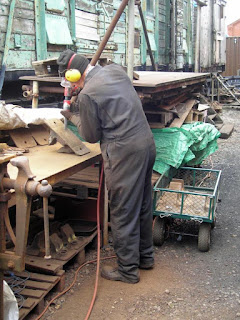 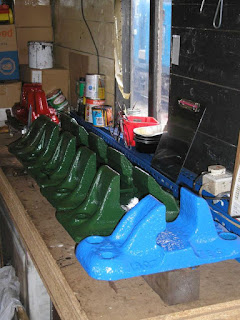 Gilbert popped in, but toddled off to Winchcombe to help Fred on the siphon restoration.