Llangollen Report
Robert Bettley-Smith posted these on the Unofficial Llangollen Railway Facebook Group: “Santa Specials are getting ready for their day: Friday 22 December 2017. But less snow than when I was rostered on them last time!” 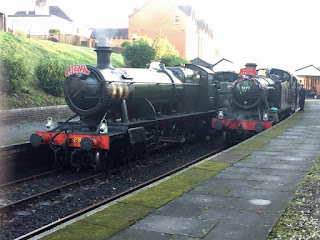 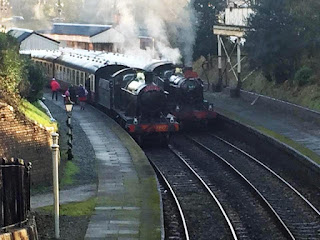 Congratulations to P-Way Dept on their splendid achievement! Supported (in a small way) by boot scraper sales (they receive £5 for each one sold).

Sunday 24th
Busy afternoon: Message from Café on Winchcombe station - they’d only two boot scrapers left! So, I dashed off to Todders to pick up four to restock them. But as I was carrying them from car to café, they sold two more! Back to Todders … decided to pick up two plus two more (just on case). Sure enough, back at the café they had only two left again! Selling faster than hot mince pies.

Wednesday 27th
Heavy snowfall plus power outage at Toddington caused the railway to close … and I couldn’t get the car out of my road because no grip on compacted snow.

Thursday 28th
Railway still closed because the car park was like a skating rink!

Saturday 30th
Those of us who failed to avoid Andrew Marshall ended up cleaning the bits of spring gear that we had helped the P&O guys remove recently.

Bruce managed to do a little more prep work on the guard irons that we hope to fit to the tender.

The most important task of the day was to repair a broken wheel on the radiator in the van. Bruce had modified a castor to suit, and is here drilling out the broken one. 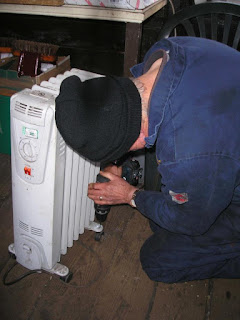 I had two boot scraper orders to progress, so I managed to avoid P&O cleaning, too!

Timetable of events
2807 should be leaving Llangollen on Monday 8th Jan and arriving back at Todders on Tuesday 9th.  Winter maintenance commences then, and she has to be fit for service by end of February.

Llangollen Report
No news … must be good news.

Wednesday 20th
Following on from our help to the P&O Group, our team got stuck in beneath their loco again. 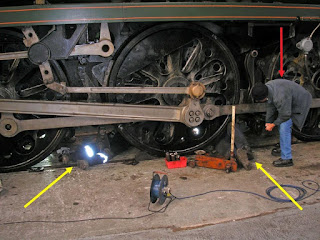 Left is Rob; right is Bruce, and Gilbert is under there somewhere! That’s Andrew (red arrow) representing the P&O Group.

Here’s Rob removing a spring hanger. There are two cotter pins in each hanger - one at the top and one at the bottom. The P&O guys had helpfully removed the bottom cotter … it’s the top one that needs to come out! 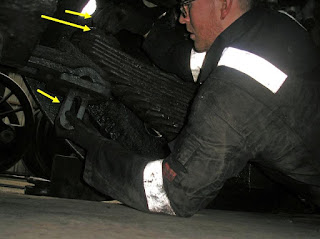 With the top one out, the hanger drops down and out. Then there is a plate on top of the spring to be removed.

Rob again, in a relatively spacious area, removing another hanger. 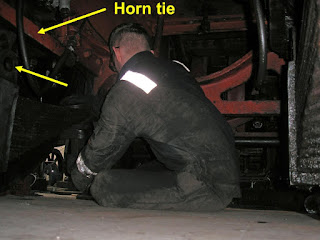 With both hangers out, the spring has to be rotated (bottom pulled towards Rob) to release the yoke at the point of suspension. Then the spring comes crashing down! Once all six springs are off, the horn ties have to be released. This needs four nuts undoing (thankfully, they had all been loosened by P&O guys beforehand). However, the horn tie is a tad heavy, and also come crashing down. Rob’s thumb can vouch for that! 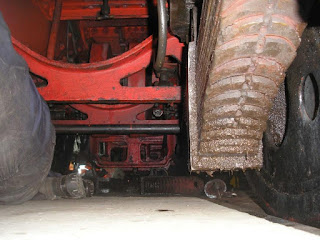 There’s not a lot of room under there! Fitting these all back together when the underkeep pads have been replaced is going to be a challenge. It will have to be done over a pit; otherwise these lumps are just too heavy to lift back from this position.

By end of play, we had all six springs off and four of the six horn ties. It was a shame, because I thought we’d got them all off, but Rob & I started in the middle; moved to the front, then forgot about the back ones … doh! 😒

Llangollen Report
The following photos were taken on the weekend of 9/10 December by Paul Evans. 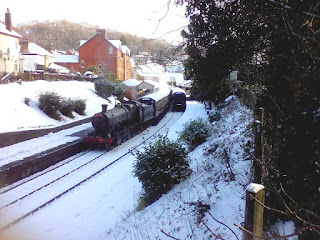 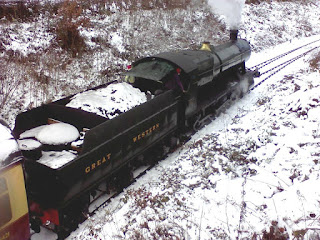 Paul says: “I'm more than happy to let you copy whatever you like. She's a fantastic locomotive; I keep saying to people that she's a pretty engine. My dad was a former fireman on the line for British Railways Western Region at Croes Newydd engine shed and I've got involved this year in the shed and on the footplate. … I'm on the footplate on 23rd, 31st Dec and 1st Jan. I do love your Loco and on the autumn steam gala with Sir Keith Parkes slipping and sliding, she just waltzed out of the station and made it look so easy. Thank you and I’m chuffed to bits that you will use the photos”.

Wednesday 13th
The planned mega-clip by P-Way was cancelled due to snow. Our working day had been cancelled because of the P-Way mega-clip day …

… but I had two boot scraper deliveries to make anyway. But before that, as I was doing my shopping, I noticed a pile of a dozen cardboard trays put out for the recycling men outside the butcher’s. So I “lifted” some (literally), because they are exactly what we use to protect the boot scrapers. Toby, the butcher, spotted me helping myself and yelled, “I’ll bring the rest, Rog!” So, he very kindly carried those that I couldn’t round to my house. Hence, I spent the morning in our van, cutting them all to size. You can hardly get in the van, now!

Saturday 16th
We spent most of the day helping with P&O, whose axleboxes need some work doing on them. This requires the whole loco being lifted on the jacks and wheels dropped. To get at the axleboxes, you have to remove the springs, otherwise you can’t remove the horn ties to drop the underkeeps … 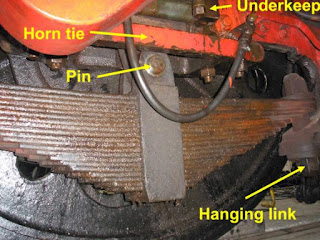 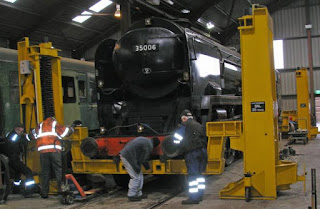 During the afternoon, John T snook off to play with our new needle gun! 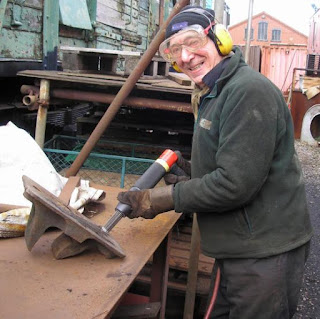 The Flag & Whistle sold two more boot scrapers, making their total sales this year up to one hundred! The staff were suitably rewarded.

Gilbert pinned up his wish list of things to do in the 7 week winter maintenance period. 😓

Wednesday 6th
Our new needle gun arrived on Monday, so I have marked it as “2807”. However, it didn’t get used today. I had to fit a connector to it (which I purloined from another air tool that we never ever use) but …… it was a tad quiet in our group, as Bruce took the day off (birthday) and John G took the day off (out with his son). This gave me the opportunity to do some wood cutting. From a H&S perspective, I will not use our band saw if there are people walking in & out. Also, it is not sensible to use it when there is wet paint around! So, today was ideal.

I had acquired a large (desk top sized) piece of hardwood from which to make wedges. It was too big to handle safely, so initially I sawed it in half. Then I cut a straight edge because it had been broken when removed - I don’t know where from; I found it in a skip!). 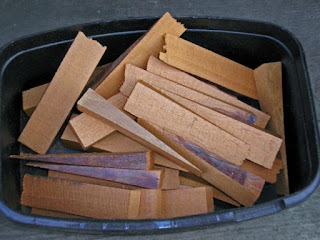 Then I could cut strips 20mm x 12mm (sorry to have to use mms); chop these into 9mm lengths, and then turned each piece into two wedges.

Andy Smith [P-Way] popped in to see how his boot scraper is coming along. I applied its top coat today.

Meanwhile, over at Winchcombe Ray was making metal plates for use on some door parts where the wood has been nibbled away by a bolt. 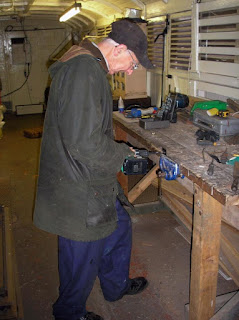 The plates will protect the wood and enable the bolt to hold the door pieces together. 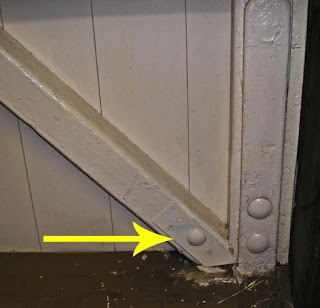 Gil & Fred were there, too, but I didn’t see what they were up to!

Saturday 9th
Rob, Bruce and I were in attendance, but decided not to do a lot, as it was somewhat cool. The water supply to ‘our’ van was frozen solid. Apart from a slow progression of rail chairs towards becoming boot scrapers, Bruce had an investigate into how to repair one of the castors on our heater. See: jobs are thin on the ground, so little things get attended to!

Fred & Gil joined us for elevenses. It’s warmer in our van than in their siphon.

Rob managed some painting, but was then called off to be induced (seems to be done in several stages these days). Luckily this was at lunchtime, so he snook off with a hot coffee in his hands. Probably the envy of the rest of the group of newies.

Bruce & I decided that neither of us would be here on Wednesday, so we cancelled Wednesday.
Bruce left, and I finished off a couple of things before departing. Rob had finished his session by then, and there was no point in starting anything new, so …

I thought I’d call in at Winchcombe station to see if they were displaying boot scrapers. They would have been, but they’d sold them all! Apparently, a lady had driven 50 miles to buy one today …luckily the staff suggested she ring the Flag & Whistle, which she did. They did have some.

Not liking to leave a bare shelf, I turn around and headed back to Todders and extracted eight boot scrapers from the van: two for the Flag & Whistle, and six for Winchcombe station. Lynn got quite excited because her Flag & Whistle has now sold 98 this year! She reckoned that she would have made the 100 by nightfall. I didn’t wait to see, but I may well pop in tomorrow (snow permitting) to see if she has made the ton. 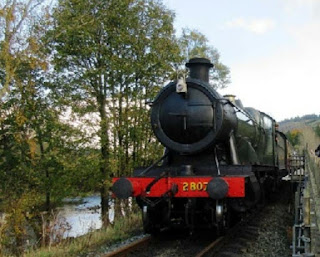 Wednesday 29th
The Steam Loco Dept has bought a new needle gun … so we just had to try it out! In fairness, we had been debating about ours, as it does struggle to do the job (and it was cheap!). 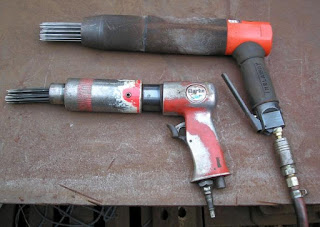 You can see how much bigger theirs is, and also it is insulated such that using it is vibration-free. I have to say, it does have a bit of a kick in it when it starts up! It certainly does a good job. See how it demolished the rust on the 1957 rail chair. I’ve left the pile of rust so you can see. And notice the shine on the metal. Hardly need to wire-brush it afterwards (doing Bruce out of a job!). 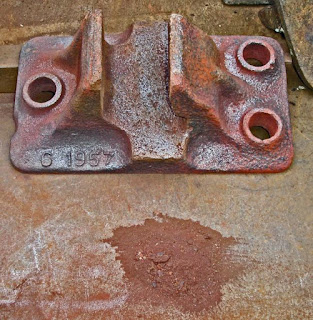 Bruce, John G and I were invaded by the siphon team at lunchtime. They just came, used our facilities and then buzzed off again!


News from Fred about the siphon van
Fred, Bill, Ray and Gil were all working on the Siphon, once more. It sounds as though they have practically finished the electrics, but not yet installed the LED lights.

They had a bit of a challenge on one metal bracket on the corner of one door: two bolts refused to behave. 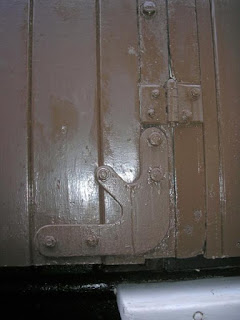 Saturday 2nd
Rob, John T, Bruce and I struggled in the cold and damp! John began with some gardening. He’d brought a couple of hellebores for our nature corner. He also tidied up some dead stems. It’s beginning to look like a garden … including what John called weeds! OK, they are weeds, but only when you don’t want them in your flower bed. They’ll have yellow flowers next spring. Every bit of colour helps!

John got to try out the new departmental needle gun. Rob missed out, as he was off to watch a rugby match in the afternoon. We were rained off after lunch, anyway.

See what a grey sky it was today! No one was still working inside our siphon van by 3 pm. 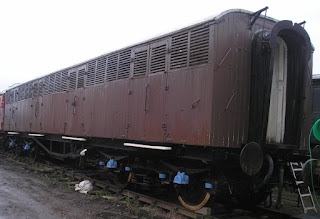