Monday 31st
I needed to do a test ride on my bike, so I popped over to Todders and applied a primer coat to the chairs that were black-bottomed on Saturday.

Carpo confirmed that South Devon can/will expand a replacement tube for us, and that if it is successful, the tube will be ready for collection on Wednesday.

Wednesday 2nd Nov
No sign of Carpo, so we’re guessing that the tube expansion was successful, and he’s gone to collect it.

Bruce and Gil arrived first, and started work on the hose connections between loco and tender. When we coupled the two together again we had not time to connect the hoses (vacuum, steam heating and water). This was completed around lunchtime, which was fortunate, because Dinmore Manor needed to be over the pit for a mechanical inspection.

Ray had been to Winchcombe to work on the siphon van, but after half an hour no one had turned up, so he decided to come to Todders. So, I set him on needle-gunning rail chairs. I’d had an order for four of the old GWR ones (circa 1894) making into boot scrapers.

John G arrived at the same time. There was by now a line of rail chairs awaiting a top coat, and John happily got stuck in at this. In fact, by end of play, Ray had completed gunning the four GWR chairs and John had slapped black on their bottoms.

Meanwhile, Dixie had arrived. Bruce suggested (over tea break) that we might clean out the tubes as some of them are blocked. I spent the rest of the morning inside the firebox, poking our patent tube-cleaning rod down each tube in turn. Dixie and Bruce were in the cab controlling the hoover (which was attached to the rod). Gil was inside the smokebox watching for ash being cleared (or blown out, depending upon the direction of air flow!).

During the afternoon, this tube cleaning team attacked the tubes from the smokebox end. I gave the tubes a good suck, and thereafter, Bruce & Gil gave them an extra blow. Everyone else went home at this point!

One thing did concern me while in the firebox. There does appear to be a calcium-like deposit beneath a lower tube (see photo), and ash in a couple of the blocked tubes was damp. Does this suggest that another tube is leaking? We’ll only know when we carry out a hydraulic test after fitting the new tube. 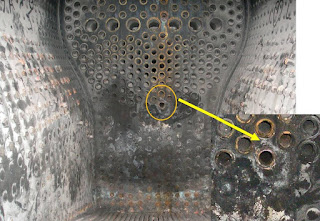 If it is another leak, then we are likely to have to replace the whole batch … effectively embarking
upon the 10-year Heavy General Overhaul three years early!

Thursday 3rd
Minor hiccup. Carpo gave “a quick update from my visit to SDR on Wednesday. I have some good
news and some bad news. The bad news is that SDR have put their tube swaging equipment away
and are not at all keen to get it all out again to swage one tube. The good news is that I had a good
chat to Rob le Chevalier about how to do a one off tube swage and I am sure that we will be able to
undertake the work here using the tube that we already have.”

Saturday 5th
Carpo set Bruce on making the swage. It’s a solid lump of steel with a taper to open out the tube’s
end. Here’s Bruce making it (well, you can’t actually see Bruce - use your imagination):

Meanwhile, John T began painting rail chairs in the production line and then moved on to needle-gunning more during the afternoon.

I painted lettering on rail chairs and stained more brushes, ready to assemble some for an order for
four GWR 92 chairs and one 1946 version.

Brian, Gil and Steve spent most of the day in a meeting to discuss how to proceed with the Heavy
General Overhaul; in particular what we ought to be doing now in readiness.

By late afternoon, Carpo decided to have a go at opening up the tube end:

As you can see, it’s a long tube. Mark is holding it upright while Carpo heats up its bottom. 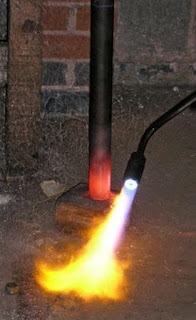 There then followed a sequence of heat, lift, bash - forcing the swage into the tube and gradually opening it out. 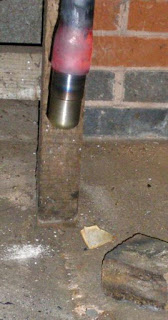 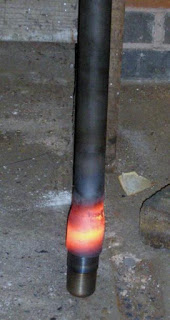 The swage was removed and then one final heat and the hot end was sunk into a box of chalk to cool down gradually. 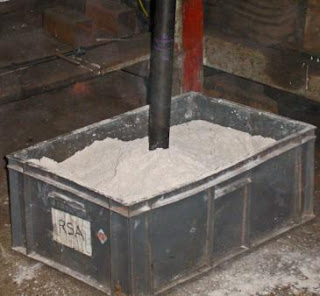 The plan now is to trim up the ends; clean up the tube plates; cut the tube to length, and then fit it. We shall then carry out a hydraulic test and if all goes well, the boiler inspector will be satisfied and we shall all breathe a sigh of relief!

So, don’t uncross those fingers yet!