Well, things have changed a bit. It’s tempting to be dramatic and say we’ve ripped up the plans and started again. But actually we haven’t.

The plan was always to throw all resources at removing the boiler because that’s the major part of the overhaul (unless we find any nasty surprises elsewhere). Having completed the last day of operations on 1st January, the loco was withdrawn from service and overhaul work started on 2nd January. Working in discrete teams, parts were removed, thoroughly cleaned, and stored away securely.

A start was made on needle-gunning and painting the boiler, and this was completed in February. The cylinders received the same treatment, as did the steam pipes, and many other parts. Also during February, the ash pan was removed, by cutting it up in situ. Into March, and the con rods were removed, and a start made removing the inside motion.

Prioritising the boiler work meant that we were ready to remove it from the frames well ahead of plan. The boiler overhaul work will be carried out at Riley & Son. We contracted a haulage company known to Rileys to maximise the chance of things going smoothly. The loco was shunted out onto the line in Toddington car park on Wednesday 18th March. On the 19th a lorry with a 20-ton crane incorporated arrived at Toddington some time before 9am. It ‘simply’ lifted the boiler from the frames, and by 11am was on its way. It arrived at Rileys either the same day or early the next. 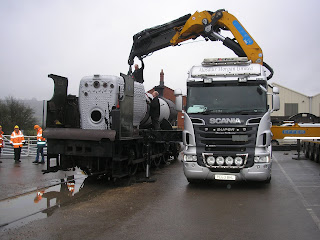 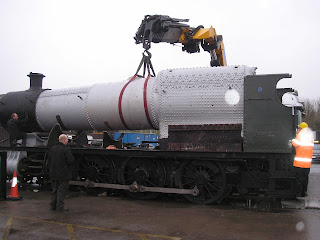 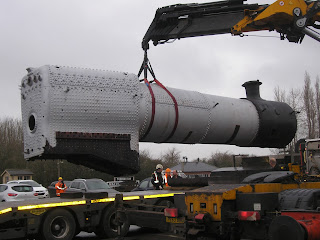 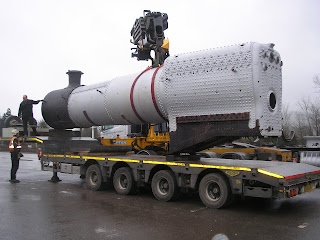 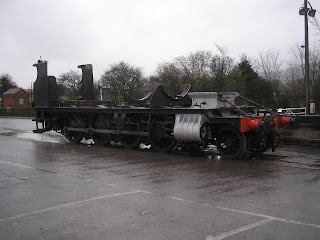 You’ll probably notice that this happened just before the country went into lockdown. So we are very relieved that the hard work has paid off and we’re in a good position for the work to continue once the lockdown rules are relaxed. However, our team, and the team at Rileys, are now ‘stood down’ until further notice.

So what’s the impact on us? The restoration has effectively gone on hold. There’s still activity around setting up contracts for work, and this includes the loco wheelsets going away to be refurbished and tyres re-profiled. But the bigger impact to us is on fund raising for the overhaul, because normally we’d expect our ever popular bootscrapers to be selling fast, and other fundraising initiatives to be in full swing, but the lockdown means that this can’t happen. So please visit the pages on this web site and see how you can help.

We’d also like to send our best wishes to the GWSR and all volunteers at this difficult time. It’s clear that the lockdown will have serious implications for the railway and other heritage railways across the country, and indeed the world. We’re sure that the GWSR is in good hands and will come out of the other end of this pandemic raring to go.

All the best to you and your families from Cotswold Steam Preservation.