Wednesday 4th
Having made the special spanner for the top clack nuts, Bruce decided to stamp the size on it: ¾ AF. Not a problem, you would think. Well, the solidus (“slash”, to you) proved an issue - there wasn’t one in the kit. So, a number 1 had to suffice. But it was not happy at being used thus, and when Bruce hit it with the hammer, the stamp flew across the work bench, passing me (I was painting a boot scraper at the time) at infinite speed, smashed into the wall and dropped to the floor … behind the bench!

There was no way of getting to it other than reaching down the back. Even Gilbert’s arms were not long enough to do that, so I suggested dangling a magnet on a string. The stamp struggled hard to stay where it was, but eventually, Bruce managed to manipulate it into a position such that the magnet could take over, and the stamp was hauled up! 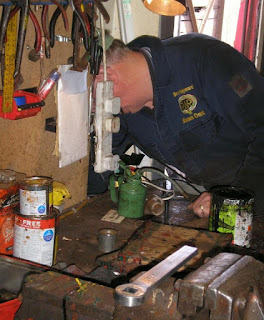 For the rest of the day, Bruce and Gil seemed to hide beneath the loco, which was outside over a pit, as it required a warming fire during the afternoon ready for service on Thursday. They were comparing the loco ~ tender pipe connections. Having obtained a diagram of how they should have been, B+G were now trying to fathom out how they could be rearranged to fit the diagram as closely as possible. I’m not one for following drawings - our loco & tender fit together, and all of the pipes work, so what’s the problem? Bruce did point out that as things are, we would not be able to use anyone else’s tender if we had to take ours out of service, nor would anyone hire our tender if it wouldn’t fit their loco.

There were a number of boot scraper chairs in the production line that required the lettering painting on them, so I started the day by doing that.

Once John G had arrived, we decided to turn our attention to the ATC conduit once more. We fitted it all along the loco side, from the front as far as the cab. This enabled us to play with the front curved section and decide how to tackle it. In the original, the pipe bends under the running board at the front of the loco, to cross to the centre and reach the shoe mechanism that triggers the bell or horn. We don’t have that shoe - it is not feasible to fit them these days, because they prevent the loco from being loaded onto a lorry - they hit the ground! So, John suggested simply cutting our pipe off immediately after it turns left to head under the running board. 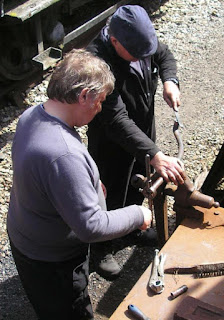 John is seen here forming a thread on one end of the front section, with Mike filing off the burr on
the other end. The loco is to be in service on all of our working days this month, so we shall now
check the joints in the conduit; clean and paint it, and then we can fit it on at the beginning of June.
Once the main run is in situ, we can see how the rear section that we do have can be modified to fit
our loco!

Friday 6th
I was volunteered to light a warming fire in 4270. The actual lighting of the fire takes just minutes …
it’s everything else that takes the time! Firstly, you verify that the loco is OK to be used. Then you
check things like water level in the boiler; that no leaks are visible (from plugs, stays, superheater);
that mudhole doors are secure; and the state of the grate and the smokebox. In 4270’s case, the
smokebox was full of ash and the firebox full of clinker! In each case, there’s no option but to
clamber inside and clear it out. That took an hour! Checking that all controls are ‘safe’ (e.g. reverser
in mid-gear; blower off; handbrake on; dampers closed; drain cocks open; etc., etc.) only takes a few
minutes, and finally you can lay a fire. A warming fire is relatively small - just in the centre of the
rear section of grate. A few small lumps of coal; a couple of pieces of wood, then rags suitably
soaked in paraffin or diesel. Dump the burning rags on top, and then pile on more wood plus a few
lumps of coal. Retire for tea and biscuits. Return to add more coal, and retire for more biscuits.
Once the coal has got going well, it is best to leave it for a while before finally banking it up with
anywhere between 20 and 40 shovels of coal - depending on things like: is the boiler already warm;
is the weather warm/cold; how big is the boiler/grate area.

MY [Loco Dept] did a spot of shunting, to arrange 2807 and 4270 over pits ready for the morning. The position of the coupling rods is quite critical to the driver being able to oil up the loco. The driver-side cranks should be at ‘bottom back angle’, i.e. a 45 degree angle between crank pin and wheel centre (green line in photo). Note the two corks (yellow arrows) that try to hide behind the slide bar mounting bracket and cause the driver to exclaim what a bother that is! 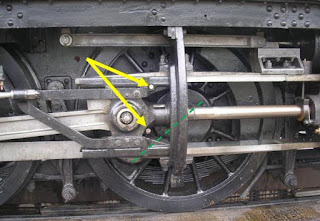 Saturday 7th
As 2807 was in service, no one but me turned up. So I went home again. Gil, Fred and Bill were
working on the siphon van restoration at Winchcombe. They have just one last double-door to
rebuild, and that appears to be all of the woodwork completed. The bogies need to be checked
over, though it is believed that they had been overhauled at Swindon shortly before we acquired the
siphon.

Tuesday 10th
It rained, so I went to Todders to cut some wedges for the boot scrapers. I prefer to use the band
saw when no one else is around to accidentally nudge my elbow as they squeeze by!

Adey told me that the painters who are doing Foremarke Hall comment about how “tight” 2807’s
boiler is - that is to say: no leaks, drips or dribbles. Praise indeed from external professionals.

09: LH leading tender brake shoe loose when handbrake on. [We were aware that the new brake

blocks did not all contact the wheels. The only way to adjust their fit is to heat and stretch the
appropriate brake rods - so we’re leaving them to bed themselves in on their own!]

Bruce continued his investigations into how best to align the loco ~ tender pipe connections to
match the various diagrams and actual locos in service. There is no single solution! Whatever way is
chosen, a large bracket will be required to run across the loco beneath the cab to support the pipe
ends. A length of angle iron was delivered today for that purpose. [A length of same rests at the
side of the scrap metal skip, too … and has been there for a couple of weeks!!!]

John G and I sanded and painted the conduit that was originally used to hold electricity cables for the ATC system. 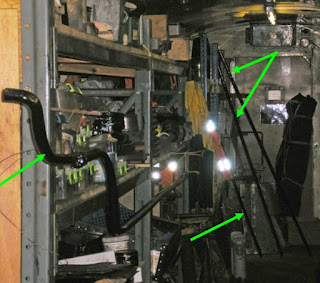 Bruce later attempted to cure a leak in out drinking water supply - but failed. It is where
two hose pipes are connected by a short length of copper tube. The jubilee clips are not man enough to hold main water pressure. 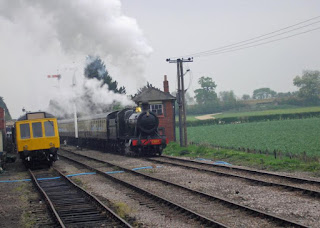 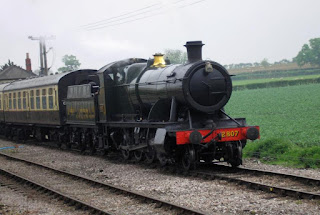 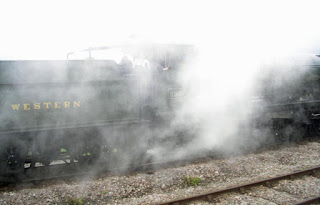 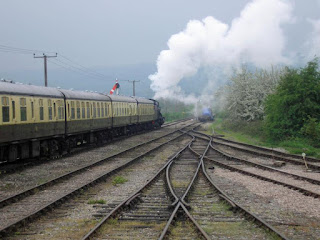