Friday 17th
Following the wash-out and consequential change of seal on mudhole doors, there was a steam leak from one door during the steam test.

Monday 20th
Brian reports:
" The loco had a fire put in it overnight and they are bringing it up to pressure today. It has pressure on the clock already [i.e. at 09.15 on Monday] and no issues so far from the new mud hole door seal. If all goes OK then she will go straight into service.

They have major motive power issues with locos away at the ELR as well as other steam and diesel failures. Chatting to the team up there today they are 99% certain she will run every day until the 31st Oct. They would love her to run till the 2nd Nov when their season ends but she is due on a truck on the 3rd to come back to the GWSR and I have requested she is allowed 2 days to cool before the move."

6.22 pm: "Steam test all good and back into service today!

They feel she will run every day now until and including 31st October."

Tuesday 21st
Update from Brian:
" Bruce pointed out to me that race trains are not until 14/15 Nov. I have emailed Carpo and he is OK with the following:

Wednesday 22nd
Bruce and I attacked the rail chair pile once more.  I frantically painted and fitted brushes to make room for the ones Bruce was needle-gunning and wire-brushing.  By end of play, we had 7 with their bottoms in the air, painted black.

Over tea & biscuits, Bruce & I mused over the lubrication of the front of the valve spindles.  There was no lubrication on 2807 originally.  The spindle wore down.  So, we devised a method of injecting lubrication into the bearing.  But this is non-standard.  Even crews familiar with GWR locos would not think to apply lubrication, because it is not a visibly obvious lubrication point.  Bruce dug out drawings and we pored over the variety of different designs (none of which fitted 2807).  In the end, we thought that an oil pot on the running board, close to the steam pipes, would be obvious and would get filled.  However, there will be steam pressure in the valve system, which would blow the oil out (rather than suck it in).  So, the oil pot would have to be steam tight. 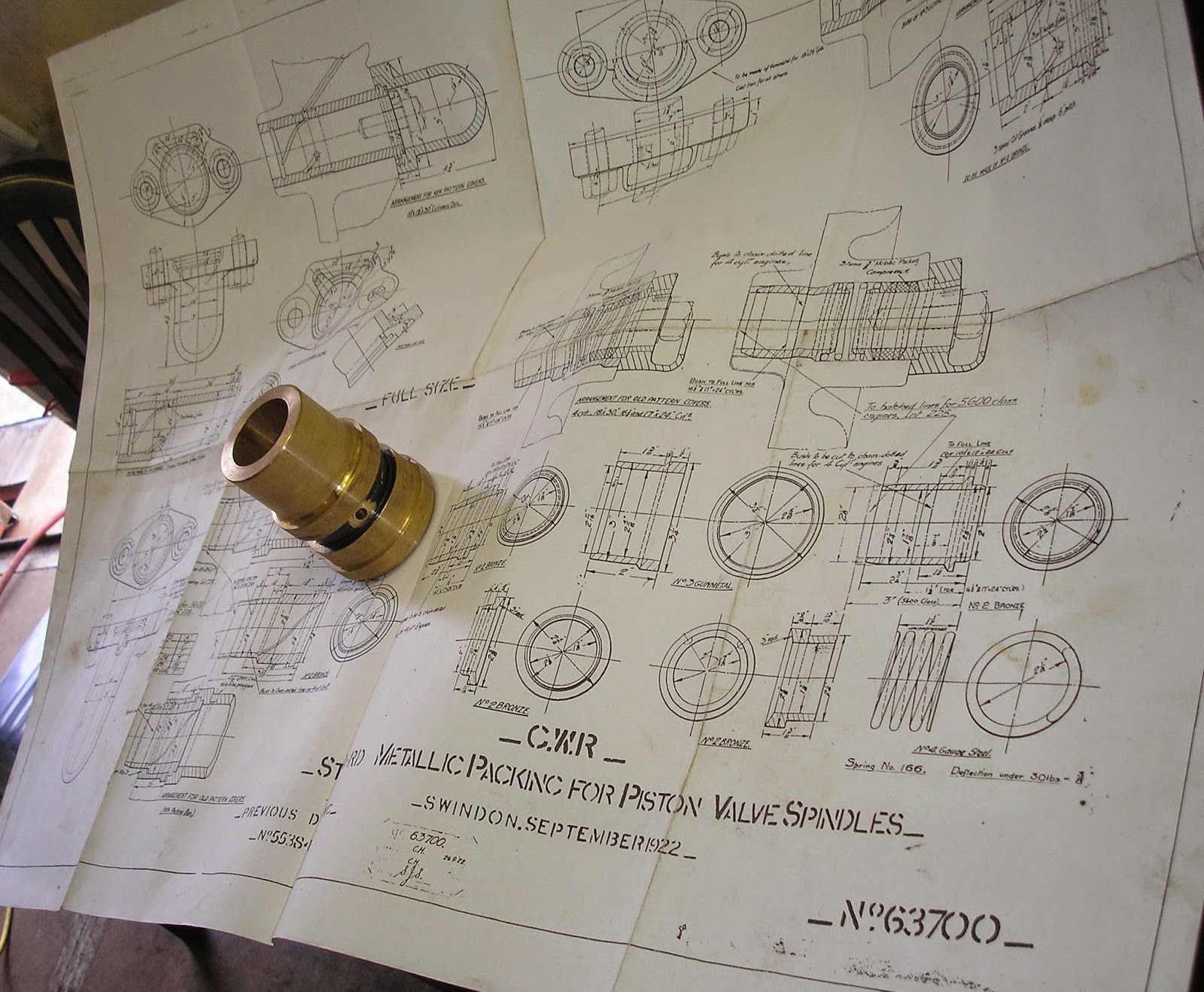 Cutting a long story short, we bounced the idea off Carpo, who said that, before we do anything, let him have a think because he has a similar problem with the 42xx.

The loco has been back in service since Monday and has performed without issue!!

I have spoken with the NYMR most days this week to arrange the return dates in November. This has been confirmed as 5th Nov loaded onto the lorries at the NYMR to be returned to GWSR on the 5/6 November."

Saturday 25th
John, Bruce and I tackled more boot scrapers - I'd had a telephone order for 4 during the week!  Just for a change, John did the painting: 7 chairs primed; 3 glossed and 8 black bottoms!  … plus two yellow chocks and 18 brushes varnished. 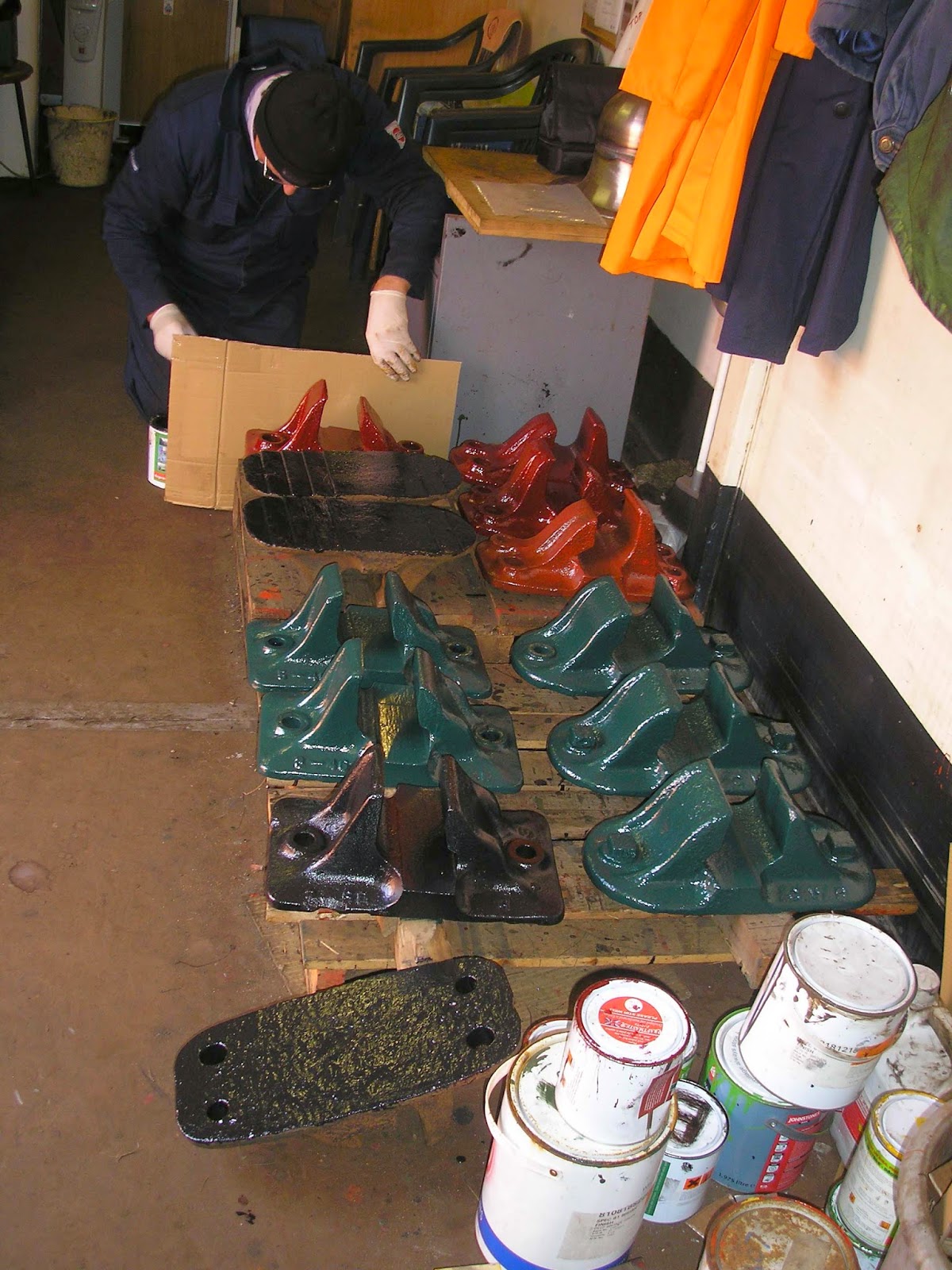 Carpo popped in to chat more with Bruce about the lubrication of the valves.  The problem is how to ensure oil gets to (and stays on) the shaft as it wangs in & out?  The key to it all is getting oil into the brass bearing bush.  We are not convinced that any of the options on the GWR drawing are brilliant.  Carpo's latest idea is to fit a mechanical lubricator.  This could be hidden between the frames, driven off the valve gear somehow, and pump oil to each end of both valve rods.  C & B have gone away to think more about it.

See here for 2807 with a freight train from Grosmont to Goathland.

"Thanks for the latest news. Would love to have got up NYMR of course, but just wasn't possible.

Steam Railway may not have had any pics but the on-line, paid-for  Railway Herald this week certainly has. Two superb shots including the back 'cover' i.e. last page.

Not sure if single copies can be downloaded as I have a year's sub, but ref to this issue is:

Brian reported:
" As of today 2807 has completed 15 steaming's at NYMR. With the 19 completed after the last wash out at GWSR before going north she is currently resting at this time.

Clive Goult has made the request to use 2807 every running day possible while she is at the NYMR but is fully compliant that the loco has reached washout limit and needs maintenance accordingly.

Ian Carpenter the GWSR BRP [Boiler Responsible Person]  is currently discussing, with Clive, the actions required to get the loco unboxed, washed out, inspected, boxed up and tested. Carpo has requested to be present at the NYMR for the inspection and boxing up.

Ian C has asked me to tell our board that the NYMR is a challenging line and that the loco will come back needing maintenance. Rest assured though Clive would not be running the loco unless it was fit to run……….they have a “fitter” inspect the loco at the start and end of every day."

Gilbert concurs: " I am expecting to have to do some work when the loco returns to Toddington. Probably the piston and valve glands."

Notice the difference between 2807 and Nunney Castle pulling away with their loads!

Me? I just nipped down to Todders to paint a few bottoms.

Wednesday 15th
Gilbert & I worked on boot scrapers.  I allowed Gil the privilege of painting both tops and bottoms, today, while I played with the needle-gun and wire-brush!

As 2807 is resting this week, there will be no more feedback until after the weekend, so here's as far as it goes.

Note that it is our AGM on Saturday, at Toddington village hall from 11.00, followed by a meeting of the Board members.  So, if you have anything to raise, ask or comment upon, now would be a good time to mention it.

More from the NYMR, and elsewhere

Wednesday 1st
Bruce and I diligently attended Todders … and set to, preparing rail chairs!  By end of day we had cleaned ten.

Thursday 2nd
I thought how quiet it was at Todders - hardly a car in the car park …. There are no services on Thursday, now, are there!

Friday 3rd
At least someone was playing with 45.149, going through Todders towards Laverton.

Gold writing completed on the seven boot scrapers that were nearly complete.

Saturday 4th
Bruce and I (again!) braved the rain.  Plenty of painting to do; so Bruce applied the primary coat to the ten chairs' tops, while I scrubbed up and painted ten brushes.  Finally, I fitted brushes to the seven.

While searching for the missing hose clip (before 2807 was loaded onto the lorry to go to NYMR) Bruce noticed that quite a lot of keys had fallen out of rail chairs on Roads 2 & 3.  Since my Grandfather was a platelayer, I decided to walk in his footsteps and, armed with the big sledgehammer-thing, I walked the length of the sidings and whacked lots of keys back in place. Some of the wooden ones were pretty useless, but I didn't have any metal ones at hand to replace them with.  Anyway, it felt good, so I then called it a day!

We were wondering how NYMR were getting on, using 2807 in the rain !!!  I hope they find the canvas cab cover … and the sticking-up things for the sides of the tender to which the canvas attaches.  :-)

No feedback yet from NYMR workings this week, apart from Stuart:
"2807 steamed all weekend and according to today's timetable has steamed again today."

and his 100 Club:
"The  September 2014 Draw has been made a few days late. I took the numbers bag to the NYMR at Pickering Station on Sunday 5th October and met Richard Rathbone, the 2807 FLA Secretary who was handing out FLA leaflets. He agreed to do the draw whilst standing alongside 2807 on Platform 2.  Photo will be in the December 2807 News.".

I called in at Todders to put a top coat on the ten chairs.  I suspect that Maurice has called in to check that his winter quarters are still available … I'll keep you posted!

Videos
See https://www.youtube.com/watch?v=cSIT_C8-l28 for 6 minutes exclusively of 2807 at NYMR up to Saturday 4th.

You can tell that she's really enjoying it (on the first clip, particularly).