Sunday 24th:
Weather B cold.  Couldn't work in garden, so retired to TPO and painted some chairs.  F&W sold another boot scraper.  "Peak" 45149 was live - apparently needed to get 150 psi (air brakes, at a guess) and currently managing 130.  Nostalgia for me, as Peaks were introduced on St Pancras line which ran past my school.

Tuesday 26th:
Coffee Pot sold 2 boot scrapers.  I took Mum on the 13.32 to Cheltenham via Laverton.  2807 sounded very good.  Sun shone.  On the return journey (Cheltenham to Winchcombe) the steam heating was switched off ... why?  ... because the crew were running out of coal, and switched the heating off to conserve steam!  At Winchcombe, they had 5 shovels full of coal left to get them to Toddington.  A barrow of coal was waiting at the end of Todders' platform (... hopefully!).  The GWSR instruction is not to over-load the tender, because this coal crumbles to dust.  I think they over-did the not-over-loading.  :-)) 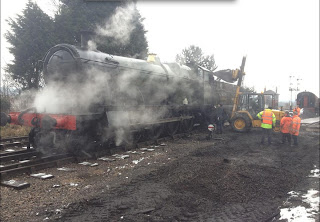 Wednesday 27th:
Chuffing up & down merrily (hopefully with enough coal, today!).  Safety valves reported as "feathering" below 200 psi.  I thought we had improved their seats and that cut-off had been much improved?  Anyway, new springs are expected any day now.  Hopefully, we can change them over next week, once 2807 is having a rest.

Fred replaced the top & bottom disintegrating steps up to the TPO with new planking provided by Stuart.  Gil painted some rail chairs, joined by Fred when the steps were completed.  Then the two of them popped off to Winchcombe to play in the siphon.

Thursday 28th:
Stuart & I bumped into each other at Todders.  John Clarke had given us a couple of old rail chairs, so we were only pottering about for a short while.
I had a phone call circa 8.30 pm with a request for a red boot scraper!  A fireman is retiring and his mates are buying him a boot scraper, and I guess they'd like it fire-engine-red!

Friday 29th:
I slapped a red undercoat on an LMS rail chair!

Saturday 30th:
The Turkish 8F broke another spring this morning!  Apparently, they had to replace it before going into service, so 2807 went out first to give them more time.
As she was in service, there was only me at Toddington.  Fred & Gilbert were at Winchcombe working on the siphon restoration.  Stuart popped in to prepare for the stall on Monday.  I painted several chairs and cleaned a further three, before deciding to go home.

2807 is out of service from Tuesday - still no loco roster beyond next week.  It does give our chaps chance to catch up on leaks on Wednesday.  Issues reported to date are:
Gauge frame test cock leaking;
LHS injector (body) cap leaking steam;
Tender brake blocks need replacing;
LHS injector flange joint leaking;
Jockey valve spindle needs repacking;
RHS valve spindle packing blowing excessively.
So, you see how restoration and winter maintenance is far from the end of the workload!  But apart from these, 2807 is running absolutely fine!