Tues 23rd (St George's Day)
With such brill sunshine, I just had to go for a bike ride!  Guess where I ended up ...
I was finishing off one of the boot scrapers (which is ordered) and decided to stick the person's name on it using a bit of blue tack.  There was a small piece on the notice board in the TPO, so I tried to pull it off.  I was wearing those blue nitrile disposal gloves ... which are quite elastic.  I caught one finger under the other as I pulled the tack off, and there was a "twang" followed by a "ching" and a "plop!".  I had managed to catapult the blob of blue tack across the TPO, hitting the lamp over the workbench, and bouncing off that straight into my cup of tea!  I drank the tea and rescued the tack, of course.

Oh, back to 2807: Bruce's fix to the T-valve on the steam fountain didn't work.  Steam leaking quite badly on Sunday.  Loco Red Carded again. 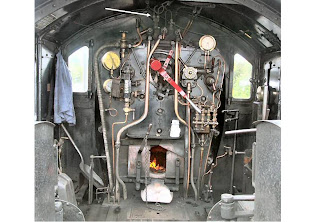 Weds 24th.
It transpired that it was not the "valve" that was at fault, but the "nipple" on the end of the copper pipe, which was badly brazed on.  Geof and Bruce had a play with this: Geof removed it; he & Bruce prep'd it, and Carpo re-brazed it.  Geof & Bruce cleaned up the pipe and Geof refitted it. 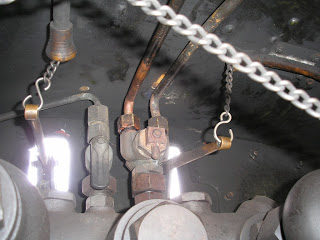 The problem with this component is that it can only be tested when the loco is in steam.  We can hardly light up 2807 just to test one joint!  However, we have rather more confidence now, and hopefully all will be well for the F&D on Friday!

Gil was preparing stuff for the stall over the (1940s) weekend, and then angle-ground some rail off-cuts as sales items.

I was doing lettering on rail chairs and fitting brushes.  As I left, Bruce had begun painting more chairs ... so I hope we sell some over the weekend!

Thurs 25th
I popped down lunchtime-ish to check, and someone had started the warming fire; so I did a bit more boot scraping.

Sat 27th.
No working parties this weekend because GWSR has a 1940s event.  2807 was in service. The only issue that I could see was that vacuum drops randomly during some travelling.  The suggestion is a leaking retaining valve (I think).  Whatever, Bruce had removed it, cleaned it, tested it & replaced it once already.  So it can't actually be that.