Weds 2nd
I was only able to do a limited amount of painting, due to my current state of health.  However, Bruce was full of energy, and said he'd try to complete the painting during the day.

Carpo has not be thrilled with the fit of two of our mud hole doors, and asked for the boiler to be drained to enable him to address the seats.

To do so, we use the blow-down valve.  GWSR no longer carry out blow-downs (because the Reverse-Osmosis plant clears salts out of the water delivered to the tenders).  The valve should be turned to exhaust downwards (into a pit).  While based at Winchcombe during the slippage era, there was no pit!  So we adjusted the valve to blow-down out sideways.  When an attempt was made to disconnect the pipe fittings which form the blow down pipe, the thread on the elbow adjacent to the blow down valve failed. Examination of the fitting showed that it was a fabricated elbow which had been put in because of the restricted space available to accommodate the “Everlasting” Blow down valve specified to us by GWSR.  The cause of the failure was a combination of corrosion and erosion of the steel pipe work used.

GWSR has advised us to replace the current "Everlasting" valve (which they encouraged us to get in the first place) with a standard GWR style (which we originally had, but subsequently sold!).

Thurs 3rd
I nipped in for an hour and painted 4 of the chairs.

Fri 4th
I nipped down to paint the other chairs, only to find Bruce there already painting them!  Because he'd not had time on Weds, after all the trouble with the pipes, he kindly thought to pop in and move the chairs along the conveyor belt for me!

Sat 5th
John attacked a pile of rail chairs with the needle-gun and wire brush.  Bruce replaced the steam safety valves in readiness for Carpo to adjust them. 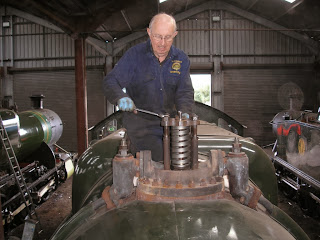 However, Carpo has to re-seat the mud hole doors before we can do any steam testing of the valves.

We had some discussion about the blow-down valve, notably how to prevent the spanner (used to open & close the valve) from dropping beneath the loco into a cloud of 300 degree steam - it's a shade too warm to pop under and pick the spanner up again!  To help you understand the valves (a little) two pics are attached - one of a GWR pattern, sideways on; you can see the nut and the retaining bracket. 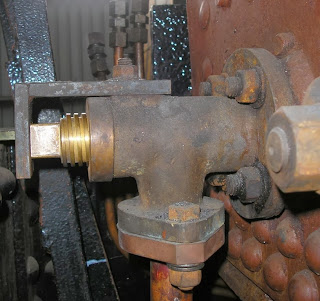 The other is ours under the cab floor (hence less clear).  Operating it is a doddle - you just move the lever (with your foot). 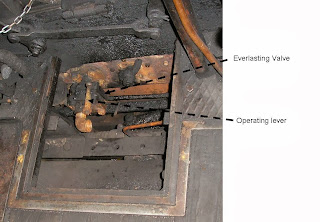 Steve wanted to help Bruce, but that proved difficult, so he tackled some rail chairs, firstly cutting off bolts and then helping John prepare them.  Some bottoms then got painted!