Wednesday 22nd
Fred and Ray were working on the Siphon van restoration at Winchcombe; Bruce and I worked on the tender at Todders.

Bruce was already cogitating on the tender brake hanger brackets when I arrived.  The one removed last Saturday had different sized holes [i.e. larger] in the hanger bracket to those in the cross-member to which it was bolted.  Hence the bolts used were really too small for the bracket.  Much discussion took place (with several people) and consumed half of the morning! 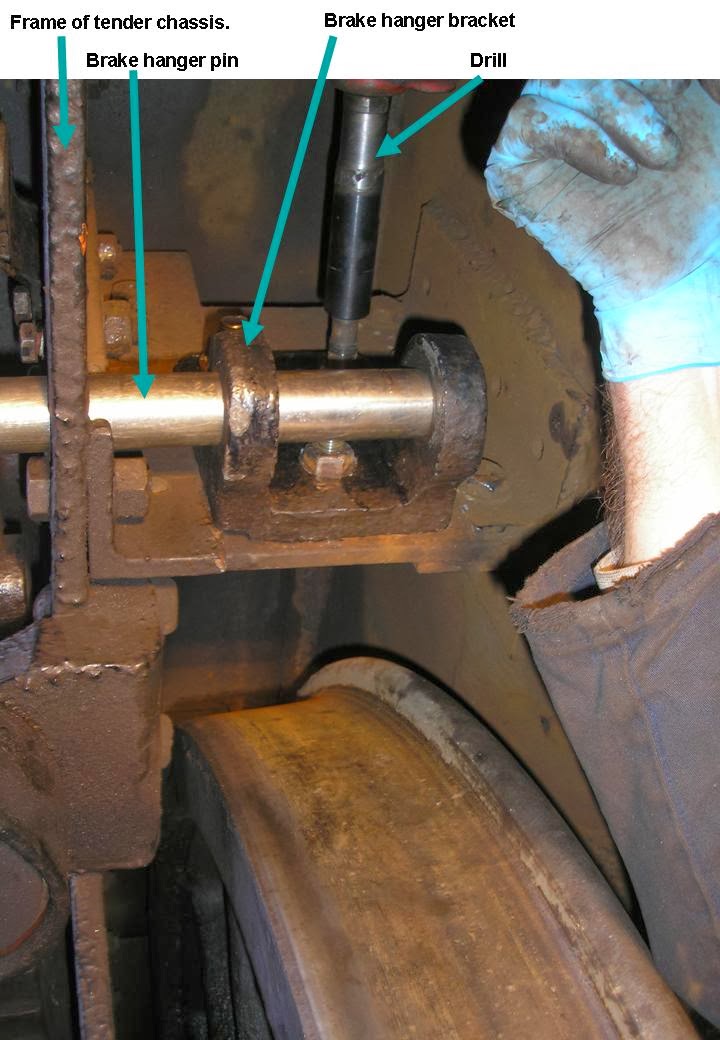 Meanwhile, I repaired our heater (both elements had died).  Then I painted some brushes for boot scrapers.  And it was probably time for a cuppa by then!

We decided to remove the other five brackets and see what the state is with those.  We managed to get them off, but access up between the frames is not easy.  In fact, one bolt on the right rear bracket fought hard not to be removed, even though we had managed to extract its nut.  It was apparent that it could only have been inserted in the first place by injudicious use of a persuader!  The holes in the bracket and cross-member where out of alignment! 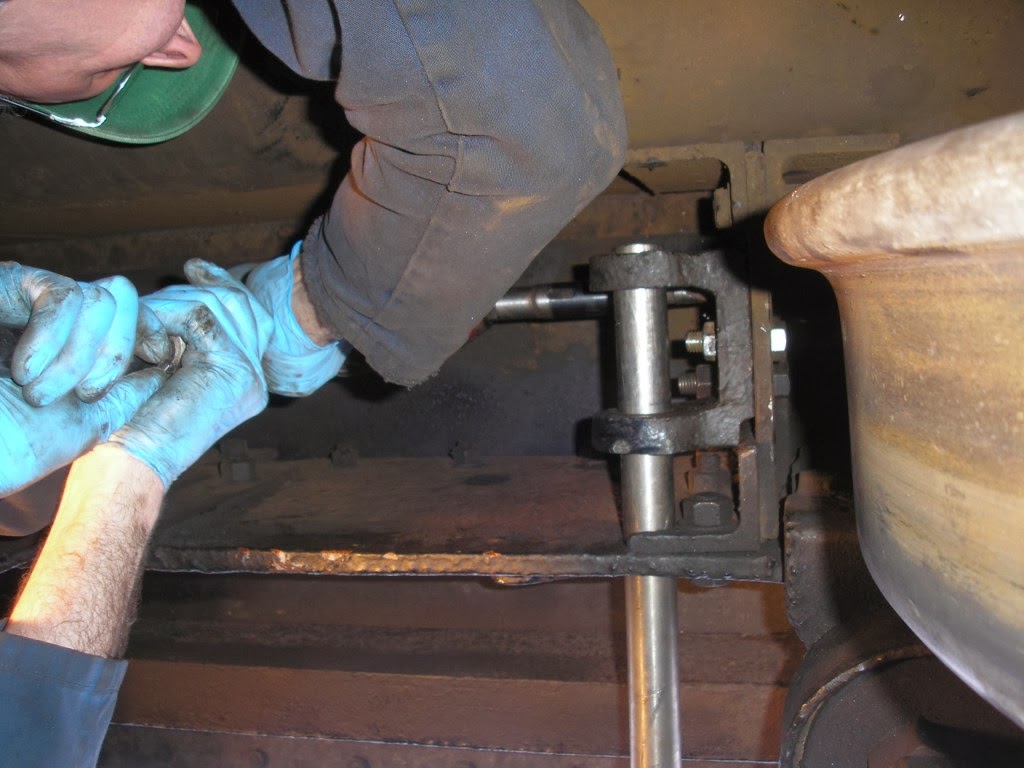 Two of the brackets had had a washer inserted between the bracket and cross-member, apparently to act as a spacer!  The rear two had had proper spacers fitted and welded into position.  This was all to do with there not being quite enough room for the bracket, because of the angle iron to which the cross-member is attached. [If you can't picture it, don't worry!]

I reamed out the errant holes in the rear right.  Bruce & I then decided on the style of new bolts that need to have a spring washer plus split pin in their ends.

Alan Richards called in (all the way from Brecon) to buy a boot scraper.  We were not mean enough to tell him that we needed his help beneath the tender :-)

JC popped in to collect two half-inch bolts for the blow-down valve that he is finishing for us.  This will be ready for testing at the weekend.

Two tins of bitumen paint had been marked for our use inside the tender coal space.  One had already gone walkabout by Wednesday!  I collected two and showed them the way to our TPO.

There was quite a bit of talking about spanners and hole-cutters; nuts bolts and holes.  So, what was physically achieved does not necessarily imply that little work was done!  Bruce & Gil drilled two holes.

OK, OK, so the holes were not exactly easy to access, and it was important to get the two sets of holes aligned such that the brake hanger pin was horizontal before reaming out the two holes together.  It transpired that on the front LHS, the three holes for the pin (one through the tender frame and two through the brake hanger bracket) were not holding the pin quite horizontally.  So, the hole through the frame will have to be opened up very slightly.

Bruce & Gil then fitted the front RHS hanger bracket, too.

Meanwhile, I decided to get back to rail chair cleaning and building up the stock of boot scrapers.  By the time the rain came (10 past 3) I had cleaned 5, of which two were extremely caked in solidified clay and/or thick solidified grease.  By chance, my wire brush (a wheel-type, attached to a drill) was expired, and I had just gone into the TPO to get a new one, and the heavens opened!  Apparently, the gale force wind was driving the rain straight past Gilbert, as he worked at wheel height on the right side of the tender (literally the RHS); but straight beneath the tender into the pit where Bruce was standing.  Even though the water level was steadily rising in the pit, Bruce struggled on manfully.

Blissfully unaware of the other two, I began painting rail chairs inside the lovely warm TPO - particularly warm since I repaired the halogen heater.  By end of play I had painted ten bottoms and three tops.