Sunday 15th
Brian came up to look after 2807, while the maintenance team took a well-deserved break!  Brian reported:

"Your efforts this week resulted in 2807 moving today under her own steam. A warming fire had been put into the loco the night before. I arrived at toddy @ 0815 to be told to put a fire in the loco after normal lighting up checks. Carpo then requested the loco be brought into steam very gently, checking the boiler at 20, 40  and 100psi.  While waiting for her to come up to pressure the loco was oiled as would be for a normal day's work. After lunch with sufficient steam on the clock the loco moved very gently out of the yard and around to the station to take on water. The tender was filled to the top and the loco returned to the yard for further checks.

Ian requested that the loco's pressure was brought around to lift the safety values. At 210psi they started to lightly feather, at 220 the first valve lifted and then the second at 223/4. The loco was then brought back to 200psi then the process repeated, the same results were seen.

The loco was then taken back out of the yard on to road 2 and ran up and down 10 times, with checks on three occasions for boiler and bottom end. The loco then returned to the yard for further checks and I am happy to report all was very well!!!

She sounded great and moved well over these small distances.  On Monday she will have an inspection by the RSA inspector."

Monday 16th
Gil, Bruce and I spent a little time at Todders (riding up & down the line!).  All went extremely well, as Gil reports:

"The Boiler inspector arrived at 9.30 and carried out the 'working examination under normal pressures'. All went well and we are now certified for a further twelve months.

… there is a minor steam leak on the 3-way valve for the condenser coils. [This has been known for best part of a year]

… Jamie arrived to drive the loco on test runs and set about oiling up and Steve Oddy arrived to act as his fireman.

… some of the tender brake hanger tie-bar joints did not show significant traces of grease flow.  [Suspected bunged-up grease channel]

At each station the loco was stopped and the motion components were checked for temperature and lubrication.

The return journey from Cheltenham Racecourse was carried out as a non-stop run and the loco was again examined on arrival at Toddington.

[Various components felt warm, but the temperature was stable, so no specific problem was encountered]

… Steam leakage was seen from the Piston Rod Glands

… oil in the top reservoir of the crosshead appears emulsified

Overall verdict on the day is that we are back in business. We will be rostered for Saturday (21st)"

Wednesday 18th
Bruce spent almost the entire day sitting on top of the boiler!  I can confirm that it was a shade warm up there, having sat on top of the firebox to re-fit the nuts & bolts that Bruce & Gil took out of a small panel on the spectacle plate with a view to removing the 3-way valve (q.v.).  They decided it was not a trivial task, and not critical to operation, whereas other things were.

Bruce then began to lap-in the steam safety valves.  He borrowed a cutter from JC (I think) and can be seen carefully turning it to flatten the valve seats (they appeared to have a ridge on their outer edge, due to a less-than-perfect previous lapping?). 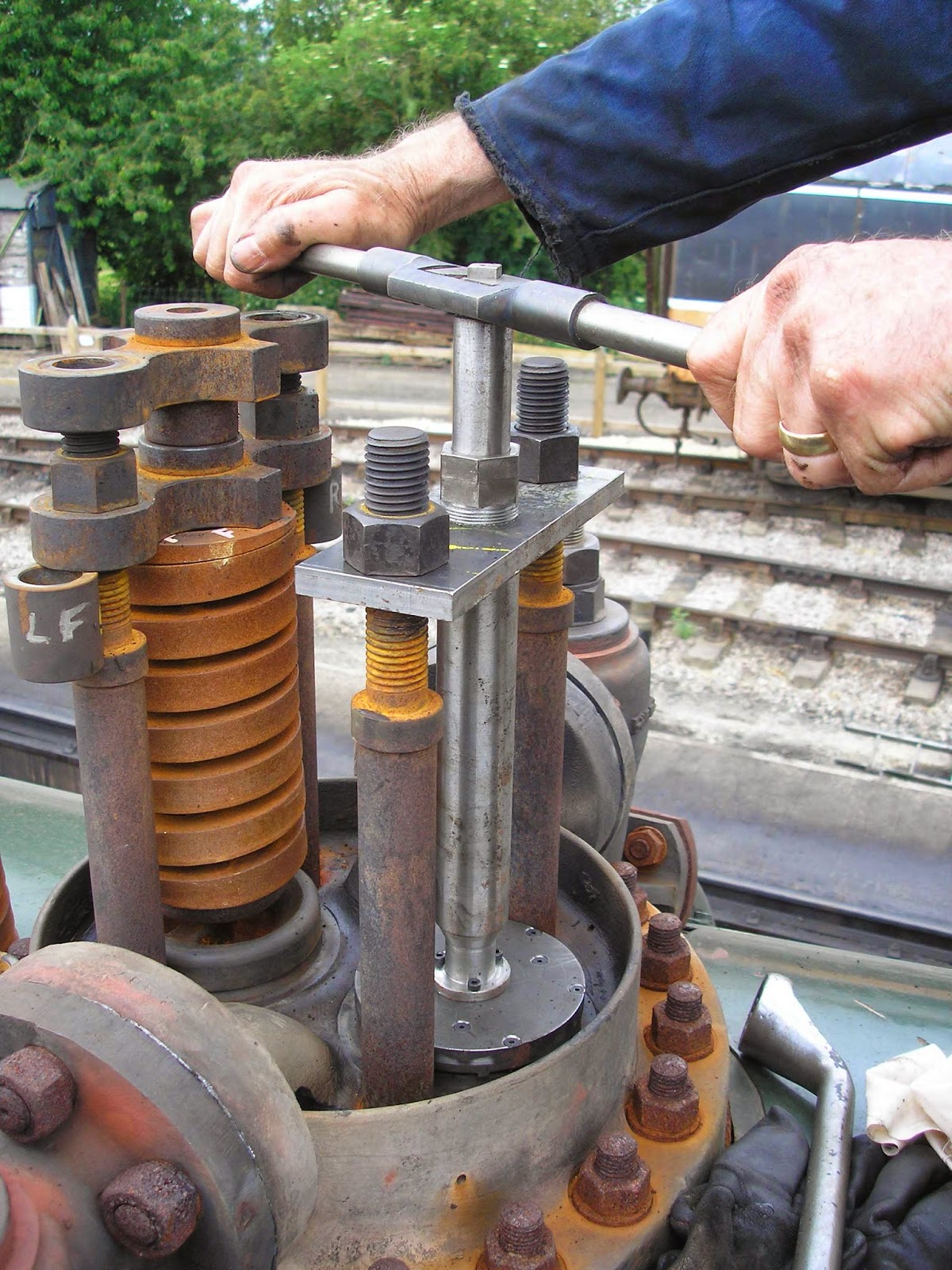 He then re-assembled the safety valves.  Meanwhile, I Brasso-ed the bonnet, and Gil & I passed it to Carpo (half-way up the ladder) who passed it to Bruce.  So, she's looking beautiful again! 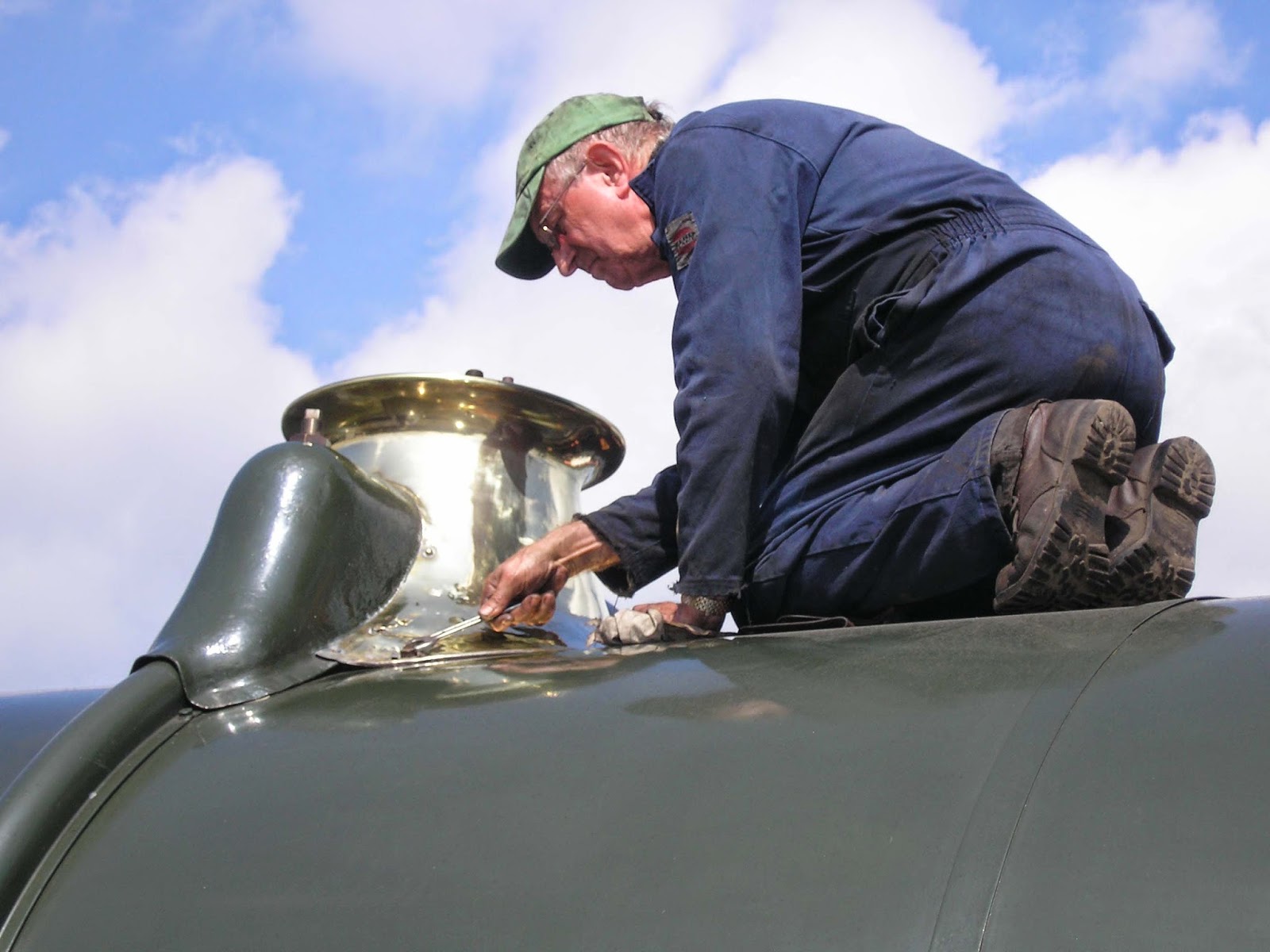 Gil had a butcher's at the vac pump rod, and decided to rotate it by 180 degrees to see if that had any effect on its warmth (q.v.).  He re-packed the piston rod glands (at the rear of both cylinders) to stem the steam leak.  He also went round everything that had been identified on Monday as "warm", but found nothing  visibly amiss with any of them.  It could just be running-in issues.

I had hoped to get back to my "normal" job of boot-scrapering; but I was requisitioned to fit four ferrules that had been removed in order to get inspection plugs out of the boiler … and refit the small panel (q.v.) … and polish the brass bonnet (q.v.) … and needle-gun two brackets from the siphon …

But I did manage to clean up three rail chairs (two very old GWR ones).

We discussed the sand boxes, and that they really ought to be tested, but we have no sand!  Bruce showed Carpo the stuff that had been used in our sand boxes while on another railway.  Carpo exclaimed that this was grit used in sand-blasting, and under no circumstances should be used for loco sand!  Luckily, Carpo has some samples of "real" sand, so I shall procure a couple of sackfulls.

Friday 20th
I popped down to paint some bottoms black.  Danny had lit a fire in 2807, and said how she was still very hot from Monday!  I think he said she's going to be "Henry's Friend" over the weekend - we're not allowed to called 2807 Henry, because she's not!

Saturday 21st
I re-stocked the Coffee Pot (they having sold 4 b/s recently).  2807 was in Platform 1, and Gil was walking back from chatting with the crew.  I gather that all was well.

I nipped down to Todders to paint 3 green tops.  Then sat out in the sun sipping tea & eating chocky biscuits, waiting for 2807 to pass by.  Aft a couple of hours, I gave up & went back to Winchcombe station … where 2807 was running round the stock.  It transpired that she was running between Winchcombe & Cheltenham … no wonder I didn't see her at Todders!  Anyway, I clambered through the undergrowth to take a picky for you of 2807 pulling away from Winchcombe heading back to Cheltenham. 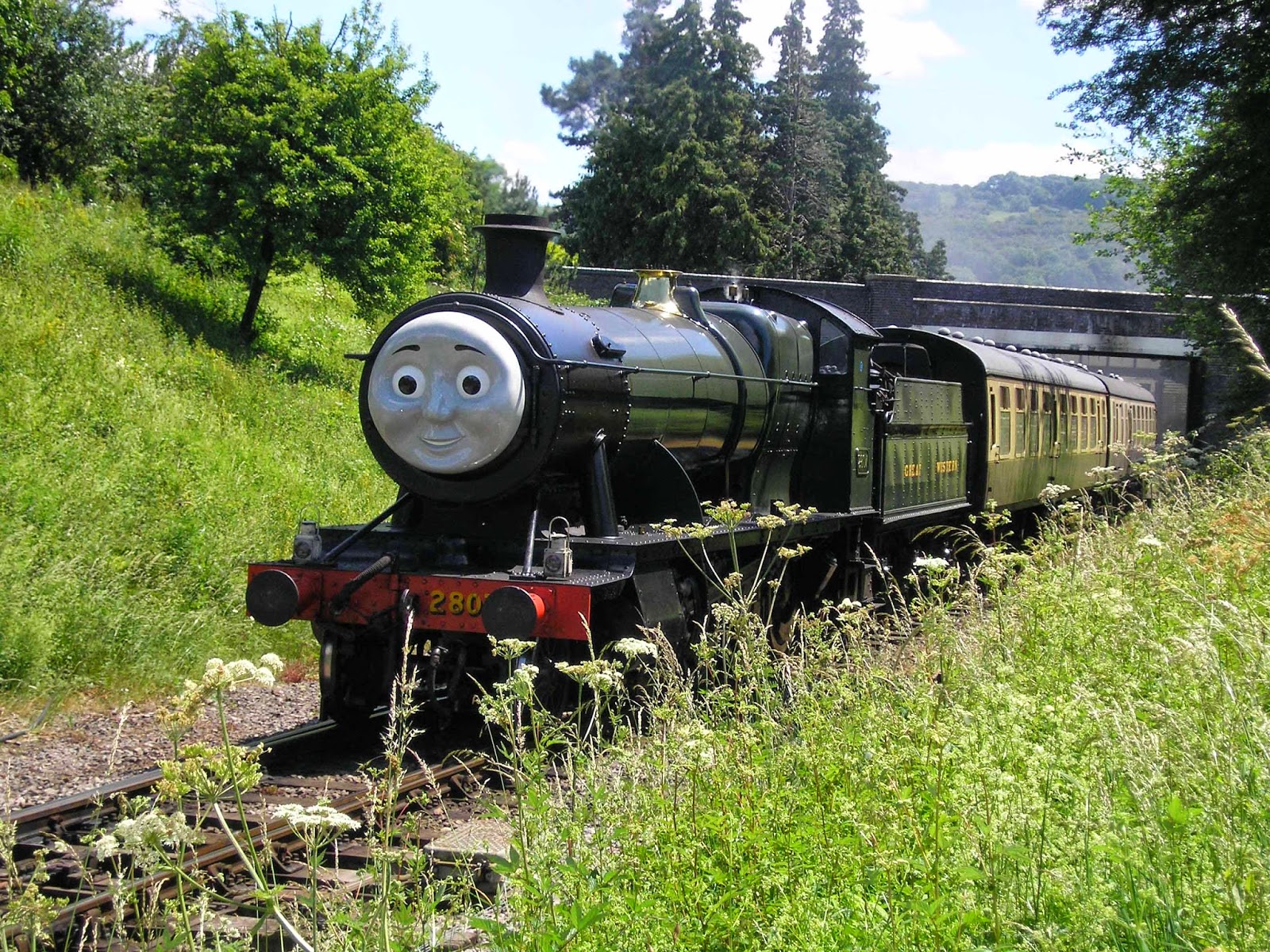