Saturday 28th
The last brake rod was fitted by Gil, John T and possibly Bruce and/or David gave them encouragement! John had to grind a bit off one end to make it fit; thereafter he made sure split pins were all in place. 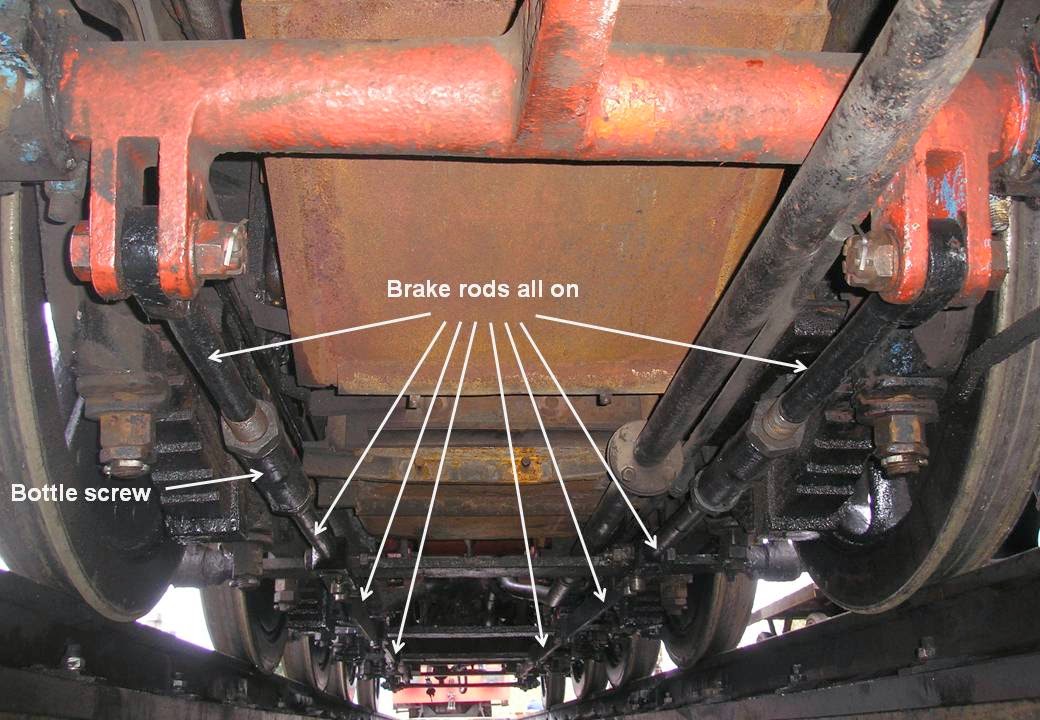 Gil went on to adjust the brakes on the tender - I saw him & Mike having fun with the bottle screw adjuster: there's a "left-hand" thread on one end ….. ;-)) 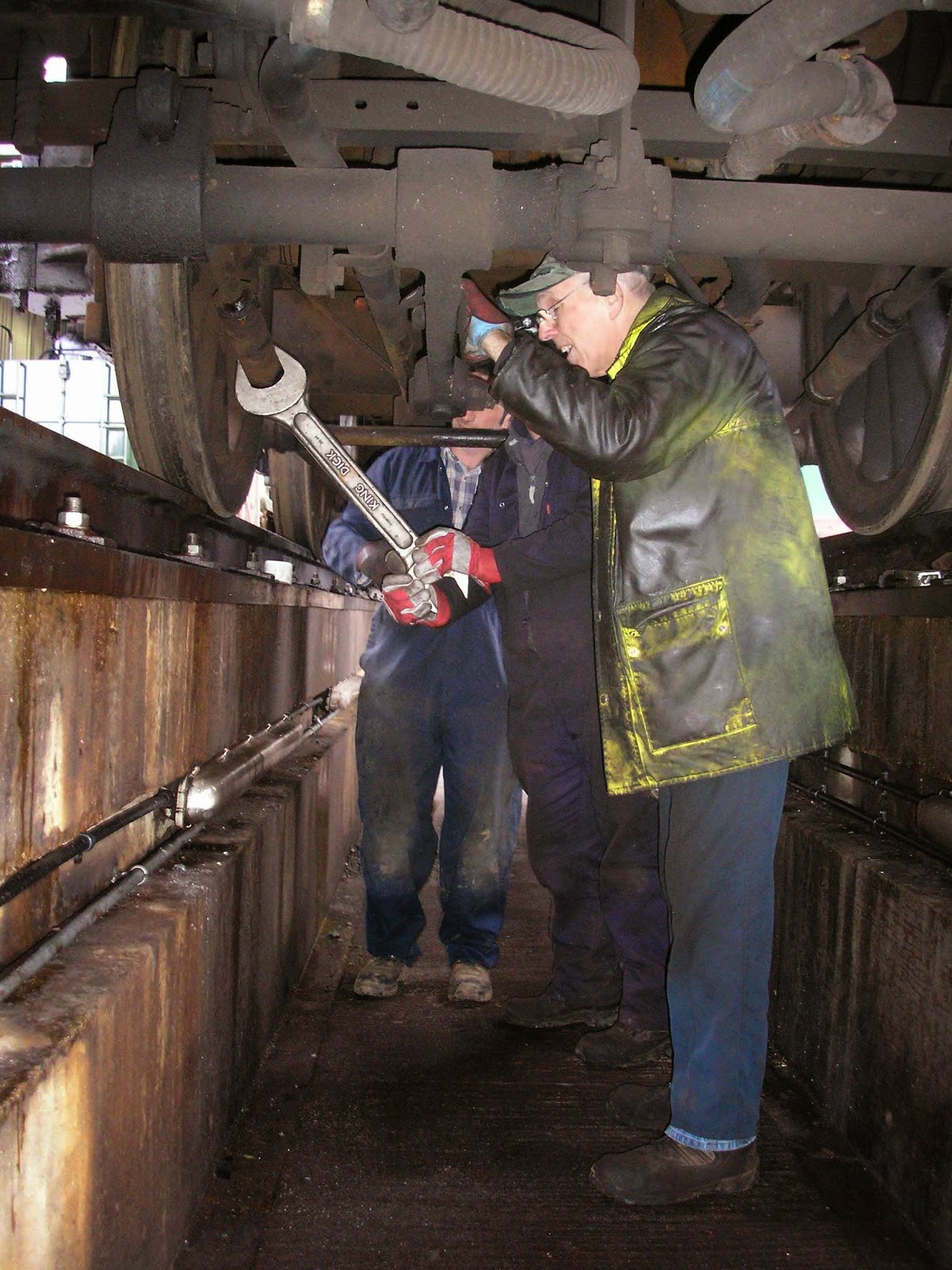 It was good to see Bill Venton rejoin our group after several years away (partly in Devon and partly working on Broadway station).  His first task was to fill the new blow-down valve exhaust pipe with sand.  This is to avoid kinks in the pipe when it is bent to shape.  Then we broke him in gently by giving him chair-cleaning to do.  Gil had brought a new needle-gun, which worked a treat.  I think we managed about 7 chairs by end of play.  John spent the afternoon chipping lumps of greasy gunge off some more chairs and had the honour of painting 7 bottoms.  Bill painted the final four bottoms. 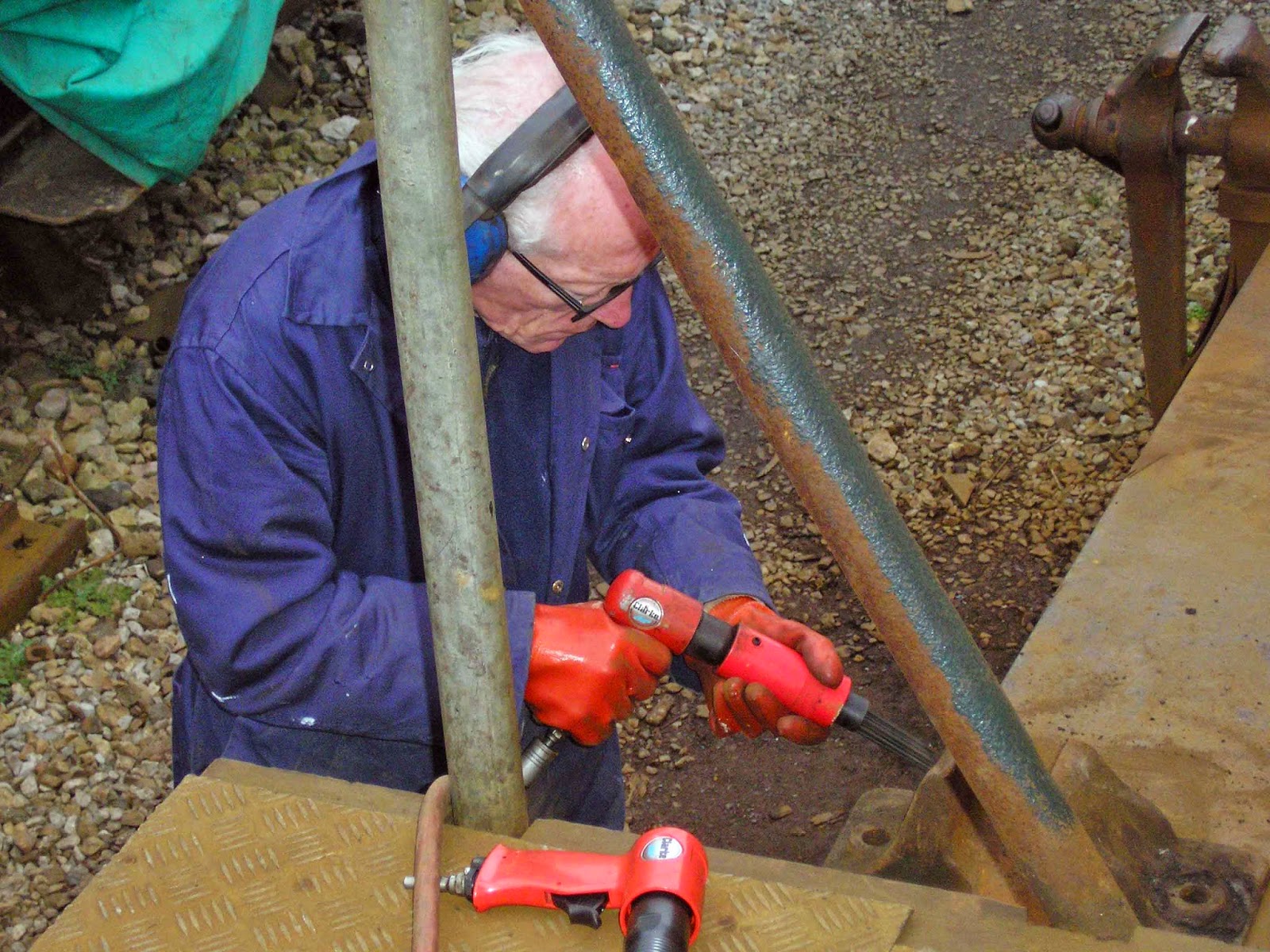 David was in the cab.  He'd made some new catches for the reverser - an issue had been raised that the reverser lever rattled about a bit when the loco was in motion.  Whether by design or age, the little catch that holds the reverser at each notch seems to be tapered in every possible direction.  So, David has made some to fit exactly.  He tested each one, and now Gil has taken them away to be hardened.

After lunch, David decided to fit the cladding to the rear of the valve cylinders.  I know what a challenge this is (having done it several times) … made slightly worse by not being able to find the studs or bolts; they were not in the standard Safe Place!  I think that he & Gil managed to find them in the end, but such is the task (e.g. you have to remove an oil pot before you can fit the cladding in place) that by end of play, David had only done one side! 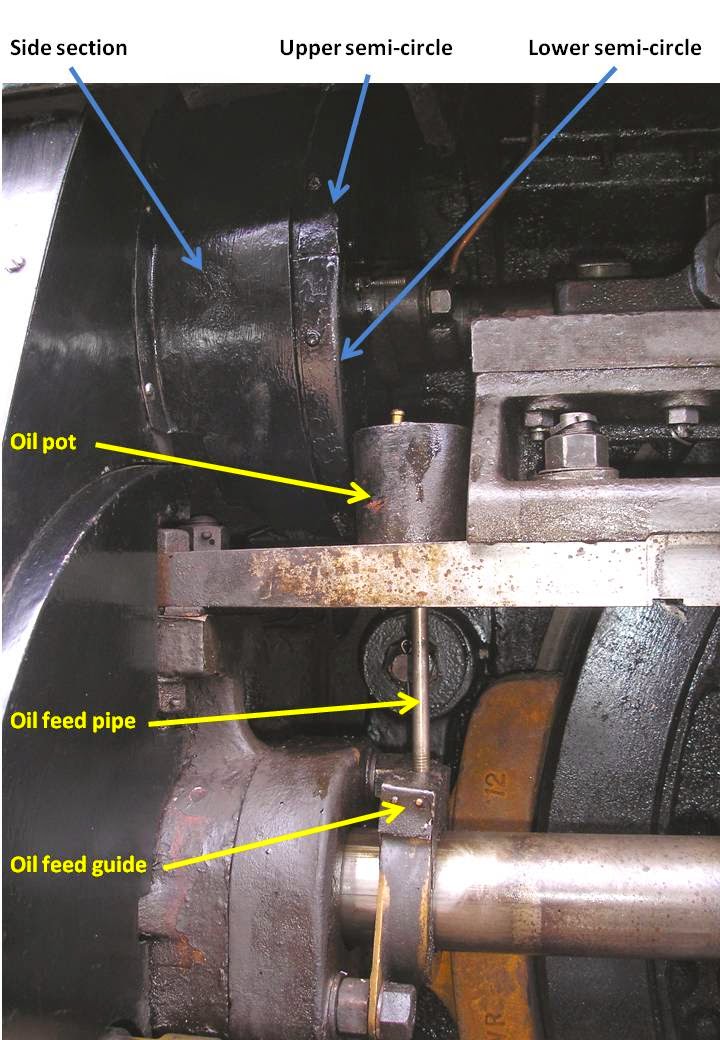 Bruce tackled the issue about the slacking pipe (AKA "pep" pipe) cock leaking. He lapped in the taper of the tap and refitted it all.  We can only test when we have some pressure, of course.  Having worked out how to fit the blow-down valve exhaust pipe without the need for the cab floor panels to be removed, Bruce bolted them down again, and then fitted the handles to the damper levers - again, you can only remove the floor panel by first removing the three damper lever handles!  Whilst in the cab, Bruce noticed that the condenser coil had not been connected up - it was disconnected in order to drain water from it over winter. 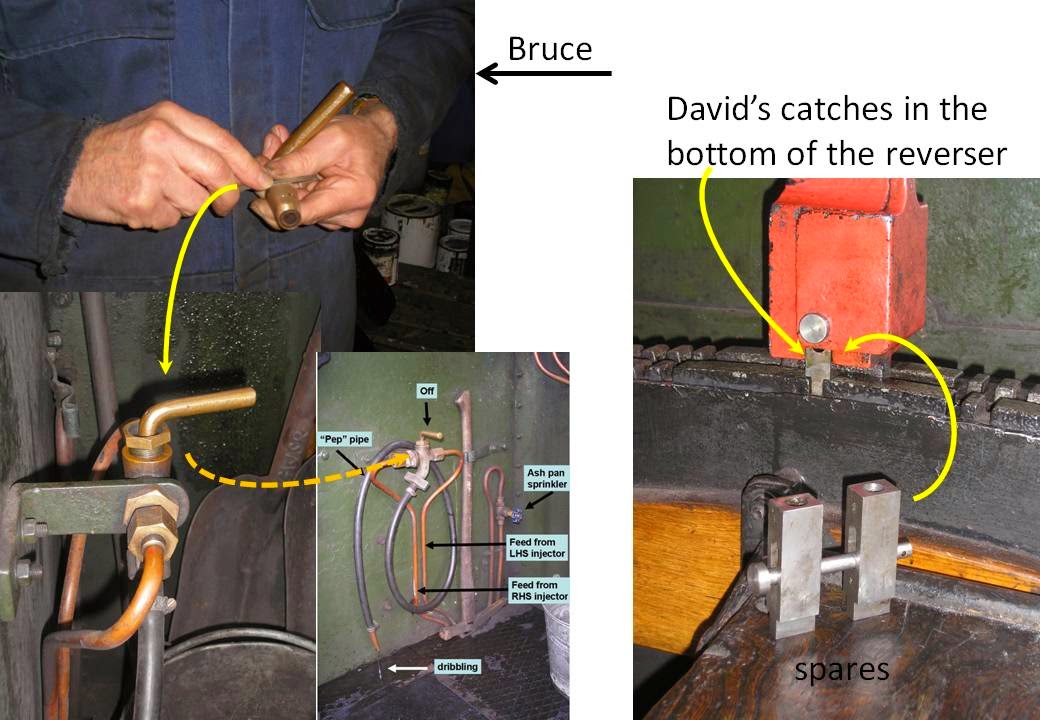 The final job for the day was to use Neil's [Loco Dept.] vacuum pump to test the brakes. Gil, Bruce and probably Mike were involved in this.  All seemed to go well.  Bruce detected a minor leak in one vacuum cylinder and tightened its gland.

The Loco Dept. is deserving of a big thank-you, as several people were crawling up/over our loco: Clive appeared to be cleaning the top of the smokebox & chimney; Eleanor was making sure he didn't fall off; Clive, Eleanor and someone else (I didn't see who) threw out all of our fire bars and fitted brand spanking new ones; Stuart, Paul & Mike were applying wax polish to the lettering on the tender; and Carpo refitted the mud-hole doors.  So, I'd like to pass on our thanks & gratitude to all of the Loco Dept. guys for their much appreciated assistance. 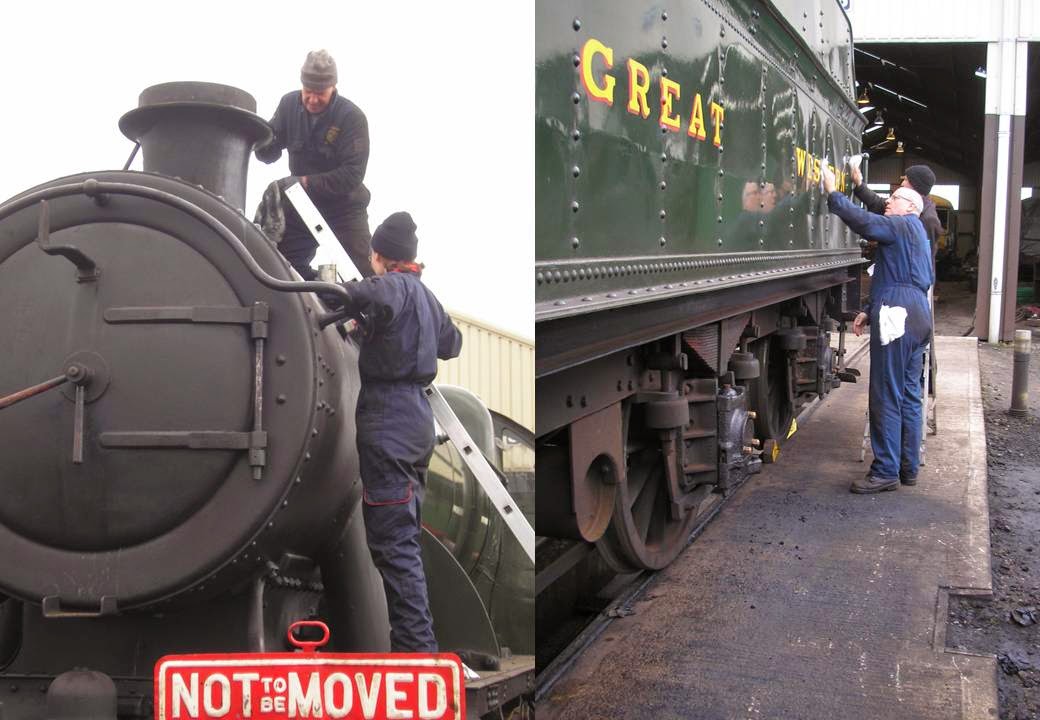 Sunday 1st March
Message from Toddington station shop: "I thought your supporters may be interested to know that I have just secured, for GWSR, a batch of the last available Hornby models of 2807 these will be available from the Toddington shop within the next week or so".

Recently discovered who the "P&P" are who manufactured some of the rail chairs: Pease & Partners Ltd., Tees Iron Works, Cargo Fleet, Middlesbrough. Formed in 1882  …  after nationalisation, the lack of prospects for a foundry heavily committed to chair making, and in the face of developments at Horwich, helped swing the balance from reinvestment in congruent businesses to orderly liquidation; wound down from 1955 and finally liquidated in 1959.

Wednesday 4th
Fred and Ray were roped in to help with cleaning, having to abandon their play with the siphon van restoration work!  Ray was particularly proud of the shine he got on 2807's con rods.  Fred went round washing everything below the running board, and then cleaned up a few places where wax had not been polished enough on the boiler and tender!

Bruce & I spent the day trying to fit the cladding to the rear of the valve chests.  David had previously found this a challenge, the situation not being helped by the various letters on the insides being ambiguous: R = rear or right? L = left or lower?  So, what's R+L mean?  Each cladding section consists of three pieces: an upper semi-circle; a lower semi-circle and a half-round outer edging section.  You can only fit the lower semi-circle by removing the oil pot.  The two semi-circles have to be fitted first, then the outer edge piece can be fitted.  Then the oil pot will not fit back in without its delivery pipe being removed.  On Bruce's side (RHS) the delivery pipe was out of alignment and wouldn't then go through the hole in its guide …. on several occasions an angle-grinder was called for …. and finally Bruce used the lathe to prune 1/8" off the spacers that position the guide.

John G finished colour coding his ferrules and fitting them.  While doing so, he noticed that some paintwork on the backhead (in the cab) was flaking off, so he cleaned all of that off and repainted it.  Thereafter, he joined the cleaning team.

Bill went round the loco and tender oiling and greasing everything that looked as though it should be (apart from the two oil pots that were causing Bruce & me grief).

Somebody had filled the boiler with water (probably Carpo, as he was later seen fitting one of the higher mud-hole doors back in place), and later Peter filled the tender with sufficient water to enable a warming fire to be lit.

Gil was wandering around all day looking for loose nuts, missing split pins, etc.  He took delight in pointing out a loose nut he'd found on the front buffer beam (which is actually a dummy - it's just there to fill the hole!!!).

Finally, Bruce noticed that some of the balance weights in the driving wheels had worked loose.  He's promised to caulk them next time!