Wednesday 13th
2807 was in service.  Actually, all other steam locos were out of service!  One with broken springs; one with a broken copper pipe; one waiting for a wash-out; and of course P&O.

John G and Bruce arrived and found that there was little we could do.  John painted a few rail chairs.  Bruce removed two stay rods from the steps up to our TPO … we'd turned the steps upside down because one step was a tad life-expired.  This worked apart from these two rods now being on the top of their steps instead of beneath them!  I applied some varnish to our noticeboard (in anticipation that someone will contribute towards words & photos to put in it!).

Saturday 16th
2807 in service.  Bruce & John T came and did some work on rail chairs.  I painted some lettering on almost-completed ones, then applied varnish to the remaining bits of the noticeboard before adjourning at lunch time.

The hand drill that we use to wire-brush chairs died on Bruce today.  It stopped rotating & started smoking (a very bad habit).  I took it to pieces and it looked as though a thrust bearing had disintegrated causing excessive heat which melted something plastic (can't tell what, because it's melted).  Decided to consign it to the bin.

Gil reports:
"A couple of weeks ago there was a report on the defect log about LH pony truck running warm and when it was looked at there was nothing obvious.

Today I was talking to Jamie to thank him for his assistance with our leaking pipe joints. During the conversation he mentioned the pony truck and I said we had not found any indication of heating of the axle box. He agreed that neither the axle box nor the wheel warm up, but the axle itself feels warm.

There is a (thrust ?) collar machined onto the pony truck axle adjacent to the inside face of each axle box. I wonder if something is catching or rubbing on it. Jamie says that they have found that if they keep the axle well oiled in that area the temperatures do not build up."

Monday 18th
I was unable to make the Supporters' Special because of family issues.  Here's a report from Stuart:
"The day began with threats of heavy showers and was dull and overcast. Supporters began arriving at Toddington station from 09.30 hrs ready for the first departure at 10.30hrs. There was an air of excitement and interest and much happy chatter amongst the people gathered. 2807 with a rake of 7 Chocolate and cream coaches was standing proudly hissing steam and wearing the Heavyweight Champion headboard in platform 1 with Driver Ben Evason and Fireman Clive Norton on the footplate ready for the off. We had one hiccup which nearly scuppered the day, there was no rostered Signalman or guard but one of our guests Bob Mackintosh stepped in a saved the day and covered both guard and signal man duties. Everyone was enjoying the day and after reading the table top information sheets was fully briefed on the day's activities. The one dampener was the 30 minute stop at Winchcombe for visits to the model railway and our SIPHON G, the heavens opened with a downpour for a few minutes but a little while later everything changed and the rest of the day bathed us in sunshine.

The Lunch break at Toddington allowed time for a visit to the sheds organised by Glyn Cornish and there were opportunities to visit the station shop and the museum coaches which had been opened for us. The Flag & Whistle provided an excellent light lunch which their staff distributed to us all whilst we sat in the coaches. Liquid refreshment was available from the Buffet car manned by OTC staff, Peter Nicholson on Journey number 2 set up a table and held a book signing for his new book Tracking Down Steam. This proved very successful, he was signing the copies and sold every one he had brought making a £5 donation to 2807 from each copy. The day ended about 16.30 hrs and everyone departed the train with smiles and many complimentary comments for an excellent day out."

John Mayell writes:
"Thank you for such an enjoyable morning today , good to see so many relaxing on the journey . I saw your Siphon wagons on way down to exit at Toddington and I hope it features in a freight rake alongside Monster wagon !"

P.S.
Sorry to anyone who has missed having an update last week.  Life has had its moments recently! 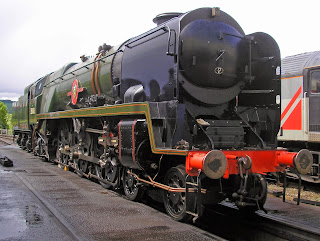