Wednesday 25th
Brian and David M took the left-hand eccentric rods off to be cleaned and give access to the eccentric strap. The left-hand inner strap was taken off for Gilbert to measure wear. 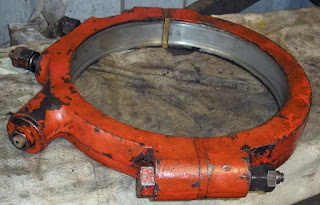 There is wear … there’s bound to be after 6 years of operation … but Carpo said it is fine for now and should last to the 10 year overhaul at which stage all four straps will need re-white-metalling.

John T and David M refitted the cladding round the main steam pipes. John then moved on to designing the final loco/tender link alignment gadget. This took the rest of the day, because of design discussions, options and measurements. John marked out a piece of steel ready to start cutting next time. 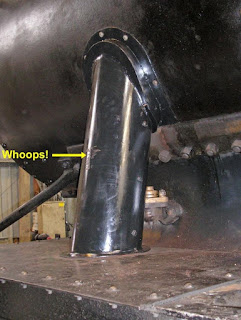 John G, meanwhile, cleaned up the three links and applied a shiny coat of paint. Oh, and the main drag link passed its NDT (Non-destructive test) on Monday.

Having warmed up a paintbrush, John then decided to apply another coat of Deep Bronze Green to parts of the cab and its handrails.

The grease nipple on the RHS rear tender brake hanger whole thread has expired received some stern treatment from Bruce - he “bushed the hole” (quote). This simply involved tapping out the hole in the hanger to the next size up, and fitting a reducing bush such that the original nipple now fits. 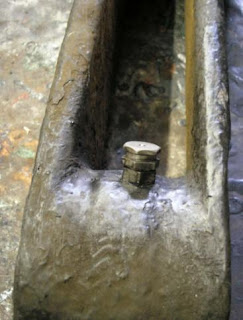 I attacked a pile of rail chairs, making a start to build up a stock of boot scrapers when the season begins. Anyway, John M keeps pestering me for an LMS one in crimson already!

Saturday 28th
David, Bruce and Gilbert cogitated over the eccentrics. You see, there should be a felt pad in the arrowed recess for wiping oil over the surfaces. There isn’t! This is not the first time that felt has  vanished. There was none in the first strap that was removed on Wednesday; so they took the second  one off carefully and hey presto: no felt pad! Another vanishing trick. 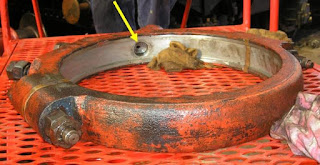 Jeff Lacey (Loco Dept) was observing, and he suggested that perhaps there was something on the sheaves themselves that was shaving the bottom of the felt pad. Over time, the felt has been worn away. 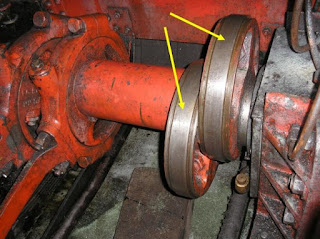 The chaps examined the sheaves and cleaned them up, but there no obvious step that presented a sharp edge. Where the two halves meet, there is a change in the surface, though not noticeably sharp. New pads were fitted. By end of day, the eccentrics were back in place.

For the whole day, John T was designing and working on making a Mk 2 version of the loco/tender coupling guide - out of metal. Many cutting discs expired; David welded a couple of length together, and progress seems to be being made. Later, I fitted the three drag links back in the tender, as John will need them in place to complete his gadget.

The new tapered pin for the rocking shaft had been delivered. David and Bruce examined it and felt that the taper was not quite correct. Furthermore, our tapered reamer needs sharpening. Bruce has some thoughts on correcting the taper fit.

I spent the morning painting rail chairs. After lunch, I decided to fit the tender right-hand rear brake hanger (the one previously with the duff nipple). It proved too heavy for me, so David and Bruce assisted while Gilbert offered encouragement. 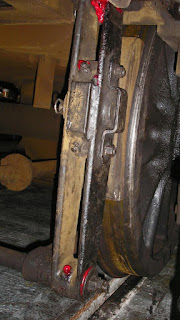 I was given the honour of testing the nipple with the red grease gun.