Monday 20th
As the weather was pretty grim, I spent the day in the dry - inside the shed at Toddington, painting the left & right running boards.

Wednesday 22nd
When 2807 goes to Didcot (April 10th) she has to be towed over Network rail tracks. They insist on all axles being sonically tested, so they arranged for a chap to come and do that. He has reported that all axles passed the test. The photo shows Pete G [Loco Dept] fitting the axlebox covers back on. 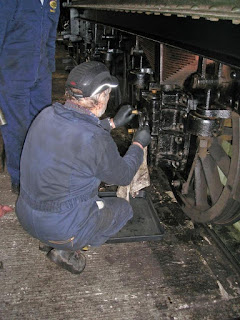 John G initially painted three black bottoms, but then volunteered to finish off painting the front running board. Just look at the shine on it! After that, he went round touching up anything and everything black. 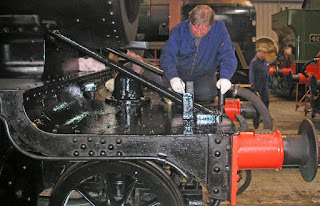 There was much discussion about the springs, and it was decided not to change the tender spring. So, Bruce & I began by tightening the RHS tender springs to try to balance up the weight. The last reading from last time had 19.9 tons on the left hand side and only 13.1 tons on the right. We
screwed the adjusters up on all three springs, but it didn’t seem to make a great deal of difference -
but it did defy logic! Jeff L [Loco Dept] shunted us to & fro, and we weighed the loco again and the
tender three times. We decided to give up!

Later on, Brian & I played games on the weighing machine. We put 112lb weights on the RHS (red)
and they registered 45 kilos. We put the same weights on the LHS (blue) and they registered 50
kilos. Eventually, we discovered that a slight sideways movement on the short length of rail that
does the weighing caused a 5 kilo change. Whether this represents a fixed 5 kilos, or a percentage
7% of whatever weight, goodness only knows!

Brian started cleaning the tender RHS. Pete Y [Loco Dept] and I continued with that, but didn’t get
as far as applying wax polish.

John P [Loco Dept] was carrying out a mechanical inspection (while the loco was stationary) and had
pointed out a taper pin securing part of the drain cock actuation mechanism could do with being
replaced. Bruce attended to that.

Gil, Brian and Steve had a meeting to progress planning issues for the Heavy General Overhaul.

Saturday 25th
David tackled the rear damper door, which was not closing fully. Even if it had closed, it was so distorted that it would let tons of air through! It’s quite heavy, and particularly awkward to remove. So, David was assisted by Gilbert and also Bruce from time to time. 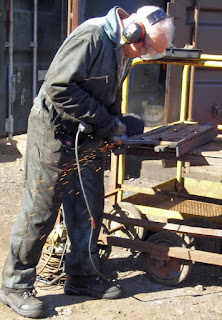 The hinges have got spacers behind them, and new spacers were made to assist the closing. However, the door continued to refuse to close because the top edge was so bent. It’s the heat that does it. David had to grind off quite slice from the top edge. 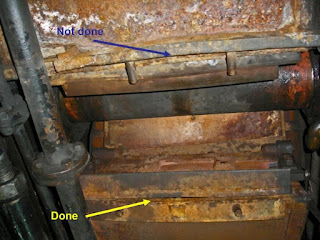 They won in the end, but it took all day to do the one damper door. Two more to go!

John T began the day with repairing some of the insulation around part of the steam heating pipe. Unfortunately, these pipes beneath the loco tend to be used to stand on (rather useful when the loco is parked over a pit, for example). So, the insulation, which comes as a tape, gets worn and eventually breaks. So, John was replacing a section. To hold it in place, he stripped the copper earthing wire from some cable and used that to secure the ends of the tape. 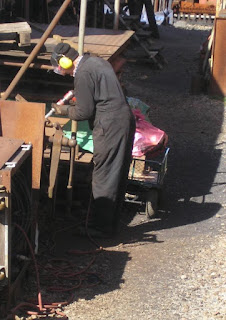 Dixie turned up, though principally for paperwork reasons. However, while here, he slapped some paint on the four chairs that were in the production line. I applied a primer to three tops, which dried in the glorious sunshine.

Bruce spent all morning worrying about the tender weight distribution. The tender seems to be level to within a few milligrommets. Bruce argued that increasing the weight on one spring raises the tender at that point, which causes the water to move its centre of gravity away from that point thereby increasing the weight on the opposite side! After tea break, his brain hurt and he disappeared into the workshop! 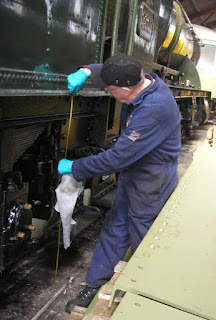 Loco Dept chaps cleaned the cinders from the grate and discovered that two fire bars had welded themselves together with clinker.

I wire-brushed rail chairs after John had gunned them with needles, in an attempt to avoid waxing the RHS of the tender. As Bruce said, “I don’t spend this much effort on my car!” Finally, I relented (i.e. ran out of chairs to clean) and waxed the top section. The bottom section looks quite smart, so I don’t know if someone had waxed that already? Certainly, at one point during the morning there was a Loco Dept chap standing on the running board cleaning the boiler barrel.

We understand that 2807 will be on display in the car park during the Recruitment Fair next
weekend: 1st & 2nd April.