Wednesday 12th
With 2807 in service, work was thin on the ground. John G painted rail chairs, completing 4 black bottoms and six tops. After lunch he cadged well-deserved a trip on the footplate. 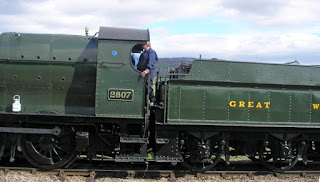 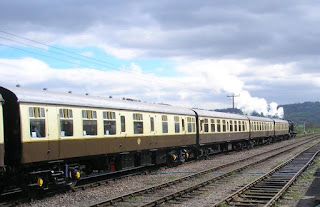 I’m not sure what Bruce was doing, apart from repairing a chisel for me and making extra spacers (of different widths) in anticipation of future damper door problems.

Gilbert was appointed unofficial archivist for the Loco Dept, and spent the day filing diagrams … some in the bin! Such reckless destruction of paper is totally out of keeping for Gilbert. Goodness knows how he managed to get the unwanted drawing to drop off his fingers into the skip! 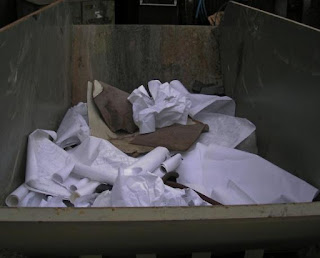 I’d had an order for rail, fishplates, chairs, etc., from a chap who has a small display in his garden and wants to build an extension. After finding old fishplates and cleaning those, I needle-gunned four more chairs. 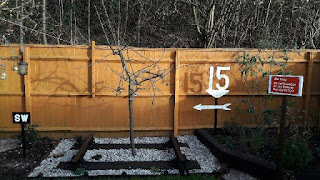 Saturday 15th
Only Bruce and I were at Todders - mainly because 2807 was in service; possibly because it was Easter weekend. However, Gilbert and Bill were at Winchcombe, working inside the siphon van. Gil did pop up to have lunch with us. They were hoping to have Richard Johnson (C&W) take a look at the siphon, and in particular recommend an approach to restoring the “concertina” corridor connections.

Bruce and I took it easy, cleaning and painting rail chairs. I had some fun with the needle-gun: It spat
out two of the needles, and began to run slowly. I suspected that the heads of the needles were
inside the piston part, and probably jamming it. So, I took it apart. Anyway, it would benefit from a
couple of new needles. The “new” needles (already second-hand from a dead needle-gun) turned
out to be an inch-and-a-half longer than these ones, so I swapped the whole set (there’s 19 in a set).

Still the gun was on a go-slow, so I took it apart for a second time and discovered that one of the
heads had indeed jammed down the side of the piston, thereby virtually stopping it from moving.
Fixing this and reassembling it, the needle-gun worked rather a lot better! However, it had taken a
chunk of the morning just doing this!

Bruce wire-brushed and applied a primer coat to the chairs in the production line. He then forced me to take a photo of the puller that he and Gilbert had made for removing cylinder covers.

The previous method of persuading a cylinder cover to come off is demonstrated by Brian (below). 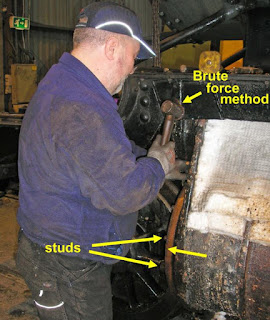 The puller is simple enough. You remove the central bolt that holds the cladding to the front of the
cylinder cover. Place the puller against four studs (fit nuts to the studs, if necessary, to ensure they
provide a level surface). Then screw the central bolt through the boss in the puller, and hey-presto!
It pulls the cover away from the cylinder. This is obviously a lot safer than using brute force to break
the seal between the cover and the cylinder block. 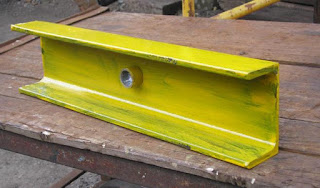 If 2807 is given a day off, on Wednesday, we can have a go at fixing the steam leak from the RHS
piston.