Wednesday 23rd
2807 was in service yesterday, and so there was little for us to do. Bruce spoke with today’s crew to try to find out how well he had machined the spacers on the safety valves. He had calculated that they should lift at 220 or 221 psi. The crew didn’t seem to be sure, but thought it was between 218 and 220. Obviously it couldn’t be far off the “red line” (225 psi) otherwise they would have noticed!

Bruce was disappointed to see that, despite having lapped-in the slacking (aka “pep”) pipe valve, there is still a dribble from the pipe. This implies that a clack valve is leaking steam, slightly(1).

Gilbert joined us for a while, but then went off to represent us at John Cocks’ funeral. While here, he and Bruce had a rummage in our box of non-ferrous spares looking for bits of cylinder pressure-release valves. JC is planning on ordering a quantity of springs for them, but has neither drawing nor spare one to work from.

Ken Shuard popped in for a natter and a cuppa at elevenses time. It’s nice to have a visitor (especially when there’s not a lot to do).

John G wire-brushed the three rail chairs that I had previously needle-gunned. Bruce ground off a bolt that was protruding from the underside of the LNWR chair and then applied primer coat to a couple of tops, while John blacked up some bottoms. 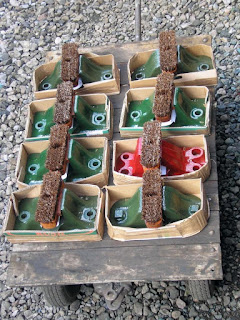 I’d had an emailed order for a 1947 boot scraper, so I clambered over the pile of chairs at Winchcombe, and found two: February and November 1947. Back at Todders, I discovered that in amongst those that I had painted recently, there were also a January and December 1947! The customer has gone for the latter - it being the final month & year of the GWR. So, I finished off 10 boot scrapers and then re-stocked the two cafes.

Saturday 26th
I popped down early to organise some boot scrapers in the production line. I had decided to take the day off and go train spotting with my Grandson, Rowan. 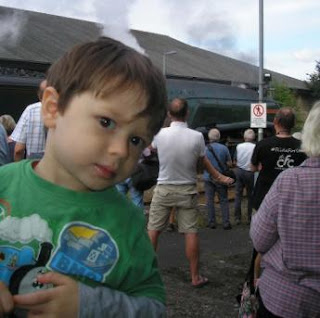 I had sorted out which required painting in what colour; painted silver lettering on the black LNWR boot scraper; wrapped up a December 1947 GWR one for an emailed order, and was just about to skive off, when Bruce arrived. Before I had chance to escape, John T arrived. Then as I was trying to escape, Gilbert arrived!

John reports: “Bruce and John T worked on boot scrapers today, whilst 2807 was in service. Bruce painted undercoat on 3 in the container, and top coated 4 in the van. John needle-gunned 5 chairs, which now await further wire brushing and painting (in the container).

Both Bruce and John each cut bolts off 2 chairs.

John brought in some plants, a sort of yellow flowered rudbeckia, for our Nature Conservation Area.” 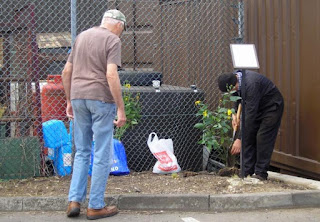 Bloomin’ rabbits dug up and ate the grasses that I had planted!

General consensus is that the safety valves are lifting at around 218 - 220 psi, and the crew cannot get pressure higher than 220. There is a question about the nominal maximum pressure (225 psi): Is that the point at which the valves lift, or should they lift before this such that the pressure does not go above it? 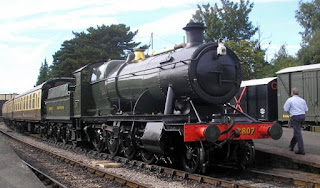 I spoke with Paul G, who was driving today, and he said that she is running beautifully. That’s Paul walking back with the single-line token at Winchcombe.

(1) A well-rehearsed saying of mine is: “Seek perfection and you are sure to be disappointed”.