Sunday 22nd
I had a message from the Coffee Pot café at Winchcombe to say that they only have one boot scraper left!

Monday 23rd
I had an email from Steam Railway to say that “Somebody has posted on National Preservation that she’s now due to stay there [at Llan] over the winter and will be taking part in their next gala”. Not so. She’s due back here at the beginning of January.

Popped down to Todders to pick up 5 boot scrapers ready to restock the Coffee Pot on Tuesday. Painted the gold lettering on four that are in production. Stuart was just packing himself up ready to go home, after spending the weekend at the Food Fayre, promoting 2807.

Tuesday 24th
Another email from Steam Railway asking if 2807 will be back from her Heavy General Overhaul in time for the Glenfarg Trials! Apparently, a 28xx went up to Scotland for trials in 1921.
See http://www.warwickshirerailways.com/gwr/gwrt330.htm

(The content of external web sites linked to from this blog is not the responsibility of CSP Ltd.)

Another phone call from the Coffee Pot; They had sold the last one, so I had to zoom round and deliver the 5 boot scrapers to them.

Wednesday 25th
John G and I pressed on with boot scraper production. The Flag & Whistle only had two left so I restocked with 4 (of the 5 we had in stock!). Would you believe it? Some clever Dick had only tested one of the boot scrapers by cleaning his muddy boots on one while it was still on the display trolley!!! In any ordinary shop, he would be legally obliged to buy it! In this case, however, all I could do was remove it, clean it, and put it back on the shelf!

We had some paint delivered for use on the exterior of the siphon van. Although the paint was actually in the box, it wasn’t exactly all in the tins! 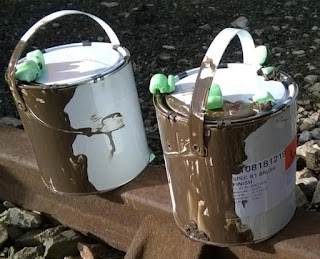 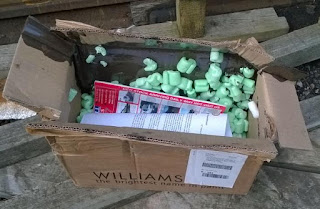 Bruce dressed our bench grinding wheel and adjusted the guard. Then he was giving advice to a group who are restoring the little Peckett. Its steps had been bent, and Bruce was recommending the best way to get them straight again. They probably need to cut them off, straighten using a press, and then weld them back on again. After lunch, Bruce went home to do more work on the guard iron components. They were cut for us, but need a bit of tidying up and the fixing holes need to be drilled.

By end of play, we had six rail chairs in green top coat and one in crimson, plus two waiting to be wire-brushed. 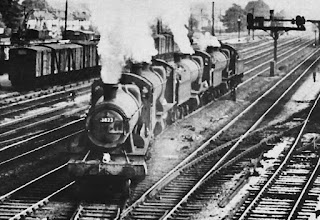 The photo comes from a 1980s publication called Heavy Freight, and the photo is credited to M Pope.

Thursday 26th
Gilbert received the following update from Llangollen:
“2807 has been running faultlessly whilst she has been with us. When she first arrived there was a small issue with the vacuum dropping off. We removed the pepper pots and retaining valve; cleaned them up and refitted. Since then we have not had a spot of bother from her.

All the crews have enjoyed being on it and I have already been asked numerous times do we have to send her back. She is a credit to you all."

At Todders we only had Bruce in action. During the day he progressed various rail chairs: moved six that had been top-coated from container to van for lettering; nail-gunned three; wire-brushed five, and gave black bottoms to those five.

Briefly, Rob (our new recruit) popped in to say that Gilbert had purloined him to work on the siphon van at Winchcombe, and then he buzzed off there. Later, he and Gilbert returned to pick up our welding kit. Apparently, he did some welding on the chains that hold up the shelving inside the siphon. Fred and Bill were also at Winchcombe, working on the siphon. 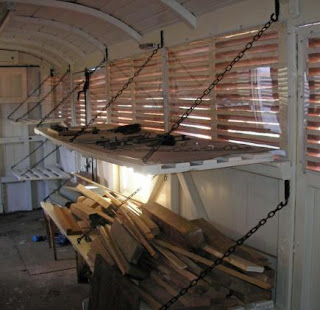 Re. the brown paint (see Wednesday) destined for the siphon exterior, Williamsons (the paint supplier) kindly sent us another tin of paint to make up for that lost in transit.