Wednesday 31st
JP was carrying out a mechanical exam, which turned up a couple of minor issues. The first was that a split pin on one coupling link was not long enough. Now, you might think that it is a five-minute job to replace a split pin, wouldn’t you?

Right! There’s a solid block with a threaded hole through the centre (for the coupling screw) and a protruding bar each side. The only way to get this block in or out of the coupling link is by springing the arms of the link. They are sprung so tight up against the split pin through the bar that the link had to be taken off and put in a vice in order to squeeze the arms together and release the split pin. 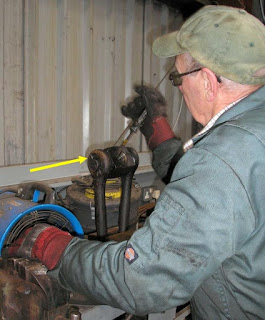 After that, David assisted John T to remove the valve covers. The main objective being to press their bushes out and rotate them 180°. This is to even out wear. If GJC had designed it properly, the valve cover would have been able to be rotated, rather than having to press the bush out! But it’s not - there’s a cut-out towards the bottom to accommodate the main cylinder cover. 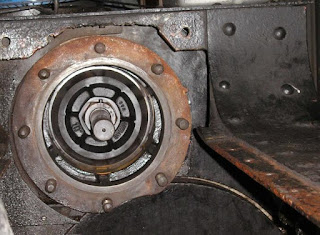 John T cleaned the threads on the studs (one of which came out - which they sometimes do) and the faces of the covers and valve cylinder ends in readiness for them to be refitted. The covers will remain off for a while so that we can set the timing … which we can’t do until the coupling rods are back on … which won’t be until their new bushes have been fabricated … which should be in two weeks time.

David, meanwhile, was onto another JP defect: There is a dust cover over the felts on each driving axle, bolted to the frames. These covers are cast, and as a result suffer badly. This one has broken into three; plus half of the side part is missing, and one of the bolt holes isn’t round. Gil is getting quotes for a couple of new ones to be cast. 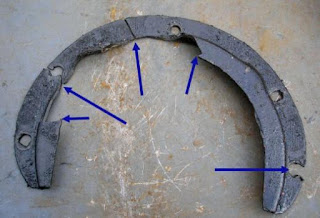 Bruce spent much of the day playing with that awkward left-hand J-cock in the cab. The copper pipes did not appear to fit well into the cock, so Bruce had to remove the pipe and adjust it a little. Then the ends and the nuts & threads all needed cleaning up. However, by end-of-play, Bruce had persuaded it all to go back together.

John G was wielding his paint brush. He gave the gauge frame a second coat of black. Gil then pointed him at the coupling rods, and John painted the reverse side of them black.

This simply helps stop them getting rusty. Then the rail guard irons on the rear tender brake hangers had a coat of black. 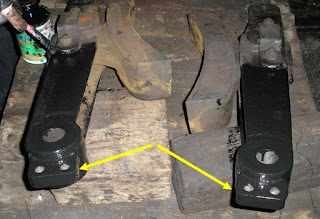 Finally, I had been busy on the production line (with four boot scraper orders to fulfil) and John blacked their bottoms.

Saturday 3rd Feb
The first task was to fit the brake hangers back onto the tender. They are heavy, and lifting them upwards to be able to locate the pin did take three of us.

We started with the left hanger. Rob and I were lifting and Bruce was aligning the top hole for the pin to go through. Gil was chief pin pusher. It took quite some effort to align everything, and then Gil managed to start the pin. However, it was difficult to slide the pin in because of the weight of the hanger. Using a wooden block, Gil gave it a hefty whack! “Ping!” What fell off? Rob retrieve the bush from the floor… the pin must have caught on the edge of the bush and the whack had pushed it out. 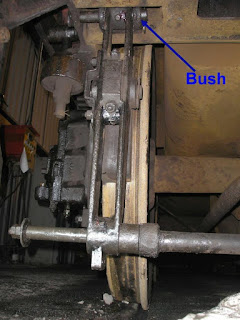 Needless to say, it took more time and trouble to get the bush back in than it had getting it out! Bruce took the bush away and rounded one edge before he managed to persuade it to go home. It was now tea break time!

After tea, Rob, Bruce and I got the right-hand hanger back in place in no time at all.
John T was cleaning the valve faces and making new gaskets for the sticking-out-bit (see below).

Rob cleaned the “inside” of the connecting rod, removing the grimes and grease so that it can be painted. We only paint the non-visible side because it otherwise doesn’t get cleaned when in service, and may begin to rust. Then Rob moved on to refitting cab pressure gauges and connecting up the condensing coil in the cab roof.

Towards the end of day, Rob was still in the cab, trying to reconnect the pipe from the coil to the hydrostatic lubricator. Would it go on? The angle of the pipe was making it difficult to line up the nut on the pipe with the thread on the lubricator. Gil had a go - he couldn’t do it. I had a go - I couldn’t do it. Bruce had a go - and finally he persuaded it to fit! But he’d had previous practice with his J-cock! 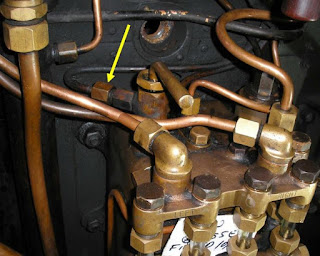 Gil and Bruce played around exploring possible options regarding the lubrication of the front of the valve spindles. On a 28xx there is no lubrication - well, it relies entirely upon the oil that is emulsified within the steam. So, the rod and the bush wears, which is why we just rotated the bushes on 2807. 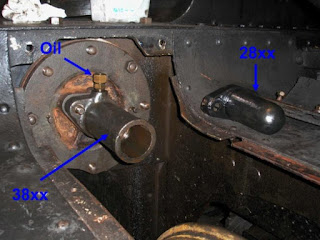 The method on the later 2884 series had an oil pot feeding a sleeve. This necessitates a pressure seal in the valve cover (else pressure in the sleeve would blast the oil back out!). 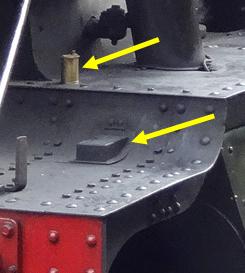 If we were to do this, we would have to modify the curved plate to clear the sleeve, as well as fit an oil pot.

Would this upset the purists? Would they cough up for replacing the valve rods if we don’t do this?