Wednesday 16th
With 2807 in service today and until the weekend, and then again over the gala (26th - 28th May) we are limited mainly to boot scraper production. After the gala, visiting locos get the limelight, and 2807 is stood down until 26 June.

John G volunteered to go to Winchcombe to help out on the siphon painting. The proposed freight trains over the gala weekend (26 - 28 May) have been cancelled, so our siphon is not now required.

Bruce caught up with the crew at one point and checked the situation regarding maintaining vacuum and dripping condenser (still). He now has a better idea of what needs doing. The outstanding issues are:

6: Driver side under cab side - main steam pipe to injector leaking at joint/sleeve. {Hopefully there will be time to see to this after the gala}
22: Condensing coil left hand side, first union from T-cocks towards coil is leaking. {Bruce had tightened this, but it continues to drip. Probably needs taking apart and the fault determining.}
23: Reservoir not building up to 23 inches [of vacuum] staying around 20 inches. {Possibly a leak at the vacuum cylinder gland, or the brakes need adjusting}.

On the latter, Bruce thinks that the central shaft with the vacuum piston on it is worn, and in certain positions, vacuum could be leaking by. We may get a chance next Wednesday to have a look - if we can get over a pit. Being the time that the gala visitor locos will be undergoing their steam & mechanical checks, we may not get a look in!


John T arrived, treating today as a pseudo-Saturday. He kindly set-to with the needle gun and cleaned seven rail chairs by end of play. Bruce had applied Deproma to four red; five green, and two black chairs. I finished off half-a-dozen boot scrapers and re-stocked the cafés.

The following photo appeared in our 1997 book, Heavyweight Champion, with the caption: “2807 hauling a demonstration train of 20 ton mineral wagons. Severn Tunnel Junction, 26.8.24.”

Ken Shuard lent me the book GWR Reflections in which the same photo appears with the caption: “.. the train is heading west and the wagons are destined for delivery to North’s Navigation Colliery, Maesteg.” The book adds more information about these wagons - where they were built and where they were intended for.

You can pick up a copy for less than £5 from the internet. 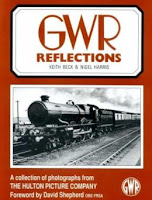 John G reports that Gil painted the siphon end doors white, and cleaned & painted the steps to the siphon doors on the North side. Fred applied brown top coat to the north side doors. John worked with Fred, and that completes all external paintwork. One double door does need replacing, but is holding for now!

Saturday 19th
Not a lot of activity on the 2807 front - only John G and I were here working. John came principally for the board meeting, but wire-brushed and angle-ground two chairs, then painted their bottoms. I moved a lot around and applied top coat to four green ones.

The crew found the cause of the loss of vacuum - a hose to the reservoir has split. It’s temporarily wrapped up in tape until Wednesday, when we will have chance to replace the hose.

2807 has set fire to sleepers recently, so we need to improve the working of the ash pan sprinkler and also fit the spark guards to the damper doors.

There is some uncertainty about when the 10-year “ticket” expires - March or May 2020. Loco Dept has asked that 2807 be kept operational until the end of ticket, and will seek an extension to end of summer season 2020, if possible. They then want us back in service, after the Heavy General Overhaul, in time for the 2024 season.