Wednesday 11th
With 2807 in service and 4270 back from its repair work, guess what happened? Bruce stood still too long and was co-opted to work on 4270! Since we are experts at playing with damper doors, Bruce was set on to find out why the front one of 4270’s damper doors would not open. He checked the linkages and they were OK, so it had to be that he door itself had seized. Well, it hasn’t been used for about 9 months, so it was the hinge that had got lockjaw. Some oil and waggling did the trick eventually.

Gil would have been standing there supervising, but it is dangerous standing still … there was a reported issue that 4270’s left-hand injector flange was leaking. It didn’t say which of the four flanges it was, but logic eliminated two of them. So, Gil and Bruce tightened them all anyway.

Gil subsequently showed some visitors around, and later retired to Winchcombe to keep Fred company.

John G and I managed to look very busy indeed, so we didn’t get pulled to work on 4270. I finished off five boot scrapers and then needle-gunned a further three. John was struggling to find space for the boot scraper production line, but managed to prime six green plus three black rail chair tops; four bottoms; and cut the bolts off one that has been ordered with a specific date.

We had some discussion about the charge for refurbishing boot scrapers. Some will be quite faded by now, and we can needle-gun the old paint off, repaint and fit a new brush. The consensus was that we should charge £15 for doing that - which is a bargain! Alternatively, you can have a new brush plus two wedges for £5.

Saturday 14th
2807 was still happily chuffing up & down. Token exchange at Todders: 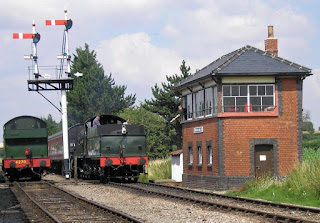 4270 had a steam test and ran up & down during the afternoon, but not on a service train.

John T and I concentrated on boot scrapers, while Gilbert wandered around in his orange vest. This seems to be a good trick, as no one asks you to help out fixing anything (e.g. on 4270) because you look as if you are doing something important already! 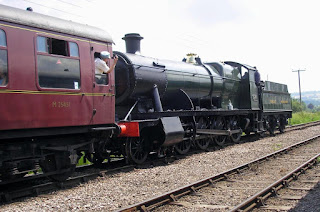 John cut the bolts off 11 chairs; primed 6 tops, and painted 3 black bottoms. I applied enamel paint to 11 chairs and then needle-gunned 4 more (to be painted red).

Wednesday 18th
It had been reported that the coupling on the tender had been wearing the safety split pins. It was as though the shackle had sprung open a shade - can’t see why or how? Anyway, Gilbert and Bruce removed it gave it a press. All OK now. 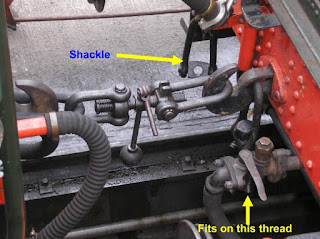 While there, they checked the brake blocks for wear, but they are all OK.

Someone reported having difficulty removing the R-clips on the rear damper spark screen, so Bruce drilled out the holes to make the clips easier to pull out.

Reportedly, the oil gun used for lubricating the front of the valve rods was not working. Gil examined  it and found that it had been filled with oil … at the wrong end! There’s an internal bung with a chain attached. To fill the gun, you have to remove the rear cap, pull the bung back with its chain and then fill the gun from the front end. Clearly, someone had simply removed the rear cap and poured oil in! Perhaps instructions need painting on the side of the oil gun?

John G and I continued on the boot scraper production line. Nigel helped John with wire-brushing a couple, then John painted three tops and four bottoms.

It’s a tense time for the Loco Dept, as P&O has broken a spring, and Foremarke Hall is having trouble with its left-hand injector.

[Loco Dept’s equivalent of watching a man dig a hole!] 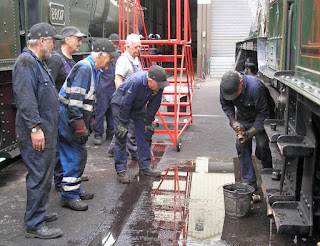 While these two are out of service, it only leaves 4270 and 2807 operational. Friday is a Fire & Drive - you decide which loco you’d rather be on! Four of you in an enclosed cab in this weather? I think not! So, we are on standby. Foremarke is rostered for Friday, but if the injector is not fixed …

It is imperative that both injectors are working: If you were chuffing up & down and one injector failed, you must have the other one working, otherwise it would be an extremely serious situation. With both injectors failed, you would have to drop or extinguish the fire to avoid melt-down of the firebox crown!

The outstanding issues for 2807 are:
6 - Driver side under cab side - main steam pipe to injector leaking at joint/sleeve. {We can’t touch this while on standby just in case a problem arose fixing it}
48 - J-cock leaking. {Ditto, not allowed to dismantle it today}
49 - Left-hand big end running hot. Oil pot full. Oil level did not change all day.
This is followed by the comment: Clive syringed out & refilled; was hotter than others but oil level dropped slightly.
Subsequently JP reported: Left-hand big end was as cool as a cucumber.