Roger's maintenance update from Saturday mentions the blocked boiler tubes, and attempts to unblock them. Geof and I spent a couple of hours on this task, but the job is not yet complete. Here's what we're up against. 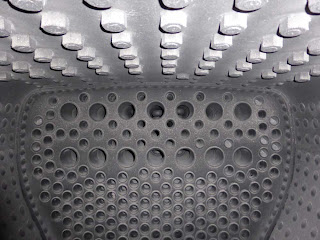 This view is taken inside the firebox and over the top of the brick arch.  You can see that most of the tubes appear to be clear, except for six in the top right hand area, and two in the top left hand.  For interest, you can also see the ends of the superheater elements in some of the 14 flues. 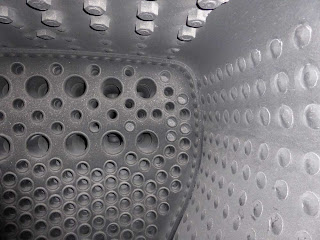 This closer look at the top right shows the six blocked tubes, but also others that may be partially blocked. 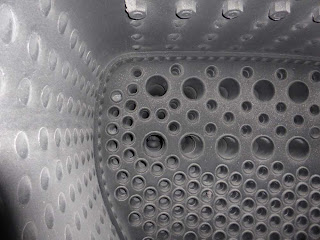 And on the top left, two tubes that appear blocked, but again others that may also be blocked.  Also note the lump of clinker stuck in the end of one of the tubes, in the lower middle of the shot.  This is probably the sort of thing that starts a blockage, with smaller pieces then getting stuck behind, etc. etc. until the tube is completely blocked. 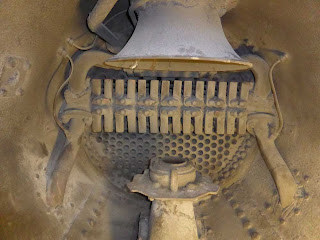 In the photo it's easy to see that the blast pipe, at the bottom of the photo, obscures a straight access to the tubes in the lower centre.  The superheater header and fingers obscure many of the higher tubes, and the steam pipes cover others. 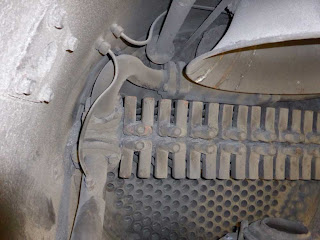 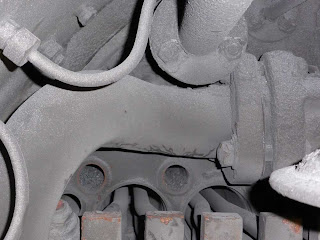 And again, another closer view showing inaccessible tubes.  Some of these appear blocked at this end.  For interest you can also see the superheater elements where they enter the flues.

The solution tried out yesterday is a flexible pipe, a little smaller than the tubes, and connected to the compressed air supply.  This piece of kit allowed better access to the obscured tubes, and with some trial and error it was possible to clear out some of the blocked tubes.  Indeed, some of the lumps of material blocking the tubes shot out at least ten feet from the front of the loco when the compressed air was used to 'persuade' them to move.  So it's pretty dramatic, but it's effective!  Not so much fun for the person in the smokebox though.

In a few days time we'll methodically work our way around the blocked tubes to make sure they're all clear.  Some may have to be accessed from the firebox end, but at least the flexible pipe makes that possible.