Sunday 18th
I opened a new tin of Deproma black paint ready to do some 1939 rail chairs, only to discover an inch-thick rubbery skin on it!  (OK, it was actually 3/8" thick).  Fed the mouse; changed its water.  Went home.

Monday 19th
Took the paint back to the shop in Tewkesbury.  I noted the shelf life is 1 year, and we'd had it for less than 3 months.  They exchanged it, no quibble.  Checked the new tin for sloshing about inside  :-)

Wednesday 21st
Bruce was painting brushes when I arrived.  After elevenses Bruce checked the band saw over and took reference numbers to get a spare blade and elastic band (drive belt).  Carpo popped in for a discussion with Bruce about W-valves.  He's probably got a problem with the 4270 restoration.  Anyway, they must be quite hopeful, because John Cruxon loaded up its coal bunker today.
I pressed on with the lettering on the batch of chairs.  Unfortunately, the gold paint came out matt, so I threw that tin away and resorted to re-painting them all using an old tin which has a thin paint, but shiny!
After lunch, Bruce & I tackled the outstanding issues logged against the two injectors - their back nuts were leaking.  It was a struggle to remove the RHS one, but the LHS came off easily.  Bruce cleaned them up, applied suitable packing, and we reassembled them.
While under the loco, I noticed that the ash pan is in a dreadful state.  Much rust is flaking off; 2 of the 3 the damper doors are badly deformed; the rear of the pan is positively grotesquely deformed.  I don't think it will last another season without serious patching up.

Friday 23rd
Made some smaller wedges for securing brushes in rail chairs.  Used them all up fitting brushes to 12 boot scrapers ready for the weekend re-stock; plus a black one for John Mayell.
Spoke to Carpo, as I believe there are outstanding issues of a boiler-related nature on 2807 that only the "Boiler Responsible Person" (i.e. Carpo) is permitted to fix.  He has agreed to spend next Wednesday working on 2807's (boiler-related) issues.  He wants to fit the new pressure relief valve springs, too.

Saturday 24th
David arrived just before me, and had started painting brushes for boot scrapers.  I'd brought 6 chairs from Winchcombe, and needed to re-stock the F&W (4 sold this week) and take some for the Coffee Pot (3 sold this week).  I also had to deliver a share certificate and 2807 print to Jane Johnson, who is "curator" of the museum on Platform 2.  There's lots of stuff in there, and not all railway related.  David finished the painting and moved on to cleaning up rail chairs.

I took over the chair cleaning and David decided to tackle the logged issue about a fracture in the angle iron below the LHS running board on 2807.  I might have mentioned it before, but it is a hairline fracture in the bit below the running board, that's extremely hard to spot (indeed, Bruce & I couldn't find it on the first time we looked).  To repair it (i.e. weld) we have to remove at least one running board.  These are bolted down with round-headed bolts.  They are a pig to undo!  David decided to attempt to loosen them all, such that when he can do the welding, removing the plate will not be such a big deal.  He constructed a gadget for clamping the bolt - which works fine for those close to the outer edge, but ...

Gilbert arrived, but despite being around much of the day, no one could quite remember what he'd done!  I definitely saw him drill a hole in a bracket for the siphon (and he later adjourned to Winchcombe to take said bracket to Fred).  Steve said that Gil had passed him a lamp, while Steve was in the firebox, and he was involved generally with the tube cleaning.

Steve and Geoff tackled the awesome job of clearing the blocked tubes - the ones that I failed to clear ages ago.  The photo shows Steve inside the smokebox with the air line.  This was an attempt at blasting out the ash, rather than sucking it out (as I tried ... using a hoover, of course). 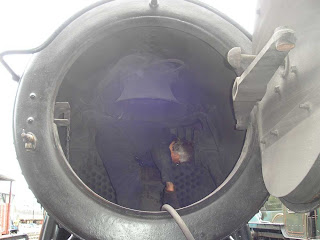 I cleaned 7 rail chairs (in addition to David's 4) and played with the band saw, making a jig for narrower wedges.  The jaws on rail chairs do vary quite a bit, and I frequently have to cut 3/4" off the "standard" size wedges.

GWSR want 2807 to remain at Todders until end of season, because they have no other standby loco.  This is unfortunate, as we were going to send her to Tyseley in October to drop the wheels and attend to the slack in the horn guides.  Tyseley are OK with us deferring until January, but it will hit our steaming next year.  Tyseley suggest 4 months to complete the task, which would give us 6 months at best to do our 60 steamings.  This would be a squeeze, because of necessary wash-outs and potential down-time (e.g. due to minor faults).