Weds 13th
By the time I arrived, David, Gil & Bruce were hard at it.  GWSR Loco Dept had purchased a sucky/blowy-thing so that when David is welding inside the ash pan, it will maintain a supply of fresh air (and suck/blow out the welding fumes).  As with any new toy, the chaps had unwrapped it and had a play - Christmas came early!

David & Bruce worked on the damper door and its linkage.  The old door needed a bit more straightening, and then a bit more stiffening, followed by the cast steel bracing being bolted back on.  David had cut out various bits of metal for the new linkage - it needed lengthening and a minor diversion inserting.  This he welded up, cleaned and primed.  Which reminds me - we need new primer. 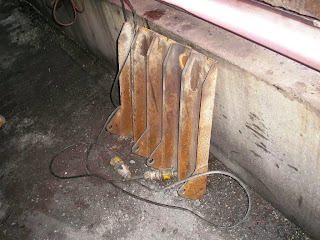 Gilbert, aided by Mike, concentrated on the ash pan.  Specifically, cutting out the bottom panel that once was the infamous hopper door.  The latter had been welded in place, having insisted on drooping during service and letting air in & hot ash out.  Finally, Gil & David were deciding how & where to make the "big cut" to remove the lower half of the rear section of ash pan.  Fred was last seen toddling round with a spirit level in his hand - serves him right for asking, probably! 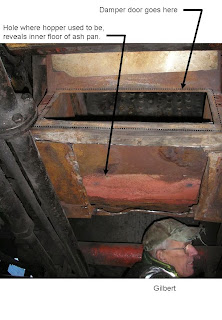 Geof arrived after lunch (after the doctor's) and took many measurements of the cylinder valve rods and valve diameters.  He pronounced that the rod had worn 25 thou' (which is within the 30 thou' tolerance) and the valves themselves were also within tolerance limits.  Therefore, no work is required to be done on them (other than to fit them back on the loco!).

Me?  Well, you can probably guess: I cleaned 5 BR(W) rail chairs plus 2 rather filthy GNR chairs.  John Mayell (P.Way) popped in to collect (and pay for) a BR boot scraper in crimson that he had ordered.  My neighbour Dorothy has ordered one as a Christmas present; she doesn't know for whom, yet, but they are so unique that someone who thinks he has got everything is about to find out that he hadn't!

Sat 16th
Initially, John T, Gil & myself prepared the workspace for cutting off the base of the ash pan.  This was the proverbial situation of sitting on a branch and cutting it off !!!  Gil was to be inside the ash pan, cutting out the bottom ... while standing on it.   :-))
So, we acquired some pallets and built a base that supported the ash pan such that when it fell, it would not drop more than the odd millimetre.  It was also time to test the sucky/blowy thing, to try to maintain fresh air in the ash pan for Gilbert.  John got volunteered to be chief gopher and nurse maid (keeping an eye on Gil while he worked inside the firebox cutting off the lower portion of the ash pan). 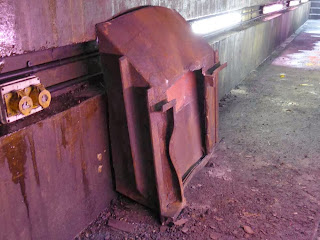 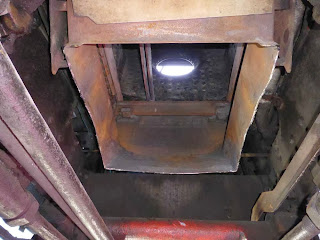 Bruce came with some ideas about testing a valve in the braking system that Carpo was convinced was sticking.  Bruce is convinced that it isn't, and so devised some ways of testing it.  We can't do that unless in steam, though.

Geof and Steve tackled the cylinder valves, with Bruce joining them.  The RHS rod and valve heads are all within tolerances, so they simply fitted the whole shaft back in place.  In an effort to save effort (!) Geof attempted to measure the LHS without extracting the whole thing.  This appears to show that the LHS rod is well outside of tolerance.  However, it was not easy to measure, so it will have to come out next Wednesday and be checked properly.  Geof, Steve and Bruce started to dismantle the LHS valve assembly to give a 'flying start' to Wednesday.

Apart from assisting with pallets, and later with carrying the RHS valve assembly back to the loco, my focus was once more on building up a stock of boot scrapers in case anyone wants one (or two) for Christmas.  I aim to have enough to tide us through December, and thereafter we have three months in which the loco will be at Tyseley, so I hope then to have more help getting boot scrapers ready for next season.