Tuesday 25th
Two things I'd wanted to do today were (i) brickwork, (ii) bike ride.  It rained on & off all day, so I nipped down to Todders instead.  Five boot scrapers sold, mainly at the Marketing Day on Monday!  Painted some black tops (makes a change from bottoms).

Update on progress at Tyseley, supplied by Bob Meanley:

"the first two wheelsets have been removed from the locomotive and the bearings dismantled. We have ordered and received all of the new bearings etc and are in the process of machining them so that they can be white metalled and pressed into the axleboxes. The white metal has been ordered and we expect deliveries in the next day or so as that particular supplier is always extremely prompt in expediting orders. We have undertaken initial measurements on the first two sets of axlebox guides which have been exposed by removal of the wheelsets and grinding works are now underway to bring them back to flat and parallel with each other. Once this is accomplished in the next day or so we shall be able to re-measure the guide faces and decide on the dimensions to which the axleboxes have to be machined in order to get the wheels in exactly the right place. That then allows us to adjust the brass liners on the axleboxes and re-machine them to the correct dimensions. Hopefully you will see that quite a lot is now going on and the first two wheelsets should be back in place in the not too distant future"

Wednesday 26th
Only Bruce & me at Toddington today.  Gilbert passed through before I had arrived, just to collect his nuts & bolts, then went back to Winchcombe to work on the siphon.  Didn't even stay for tea & biscuits!

Bruce pressed on with gaskets.  He has now made 10 for the vacuum system (see photo of new fitted, with old nearby).  There are just 4 pipes for the steam heating system remaining to have gaskets made.  Bruce says that JC tells him off for calling them gaskets - they should be called "joints".  Well, joints has several other meanings, so let's stick with gasket! 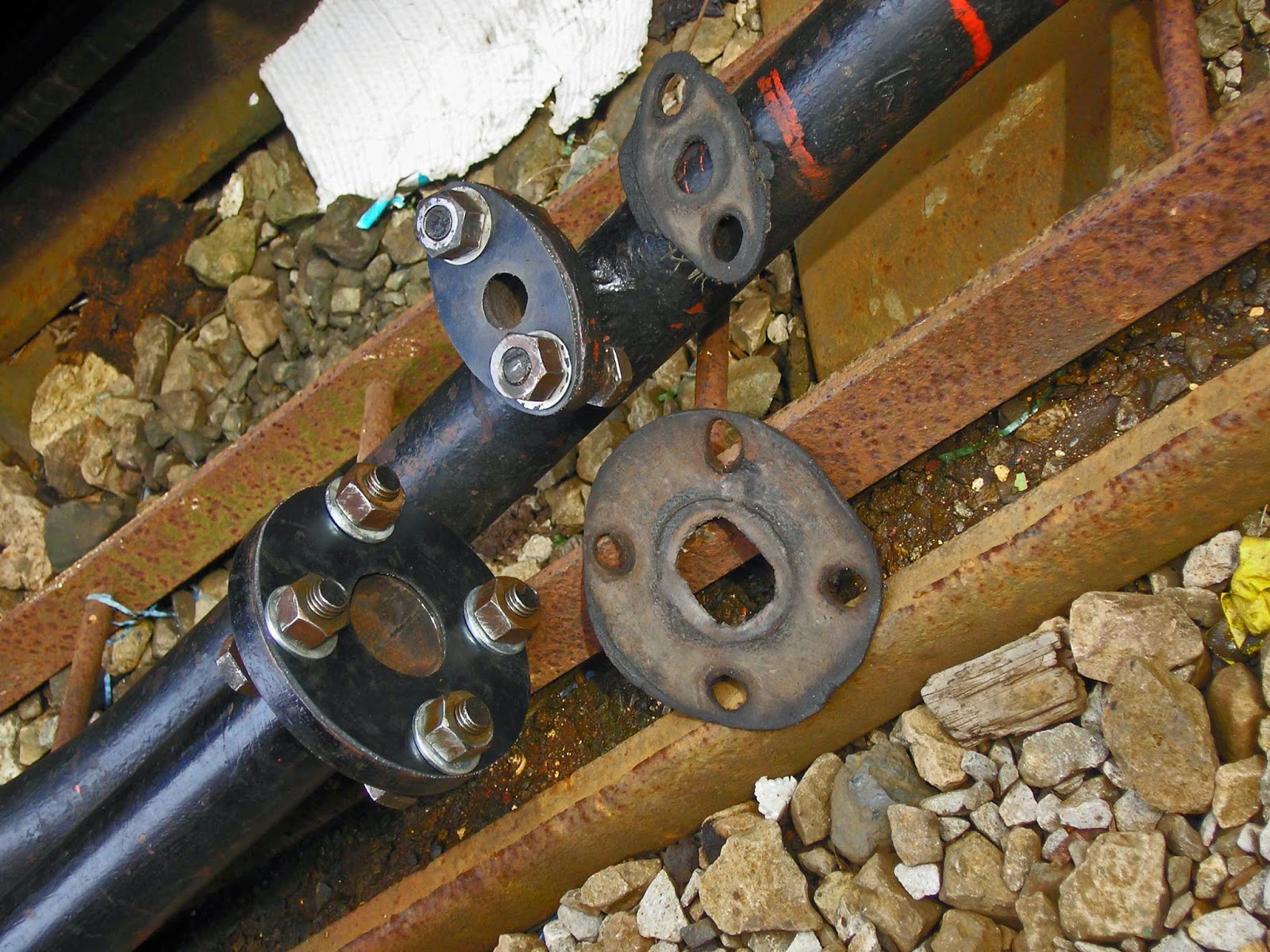 As the day began dry, I attacked a few rail chairs with needle-gun and wire brush.  Some interesting lettering:

(i) There's one with no railway initials nor year, just the manufacturer TS&S.  Any ideas?

(ii) There's a BR(S) chair from 1952 with manufacturer TSB (and I don't think the Trustee Savings Bank had an interest in iron foundries - unless one went bankrupt, of course, and the TSB took it over!).

(iii) And finally one marked as L(M)S.  Why is the M in brackets?  I assume it is London Midland & Scottish.

Carpo popped in to say that he had "borrowed" four of 2807's ferrules because he was about to fit pipework on 4270 and could only get the ferrules in before the pipework was fitted, so …    I've ordered a new lot!

Today's rumour is that the railway are interested in displaying out siphon van at Winchcombe station, once we have restored it and kitted it out.  We have in mind covering its two intended uses: (i) as part of a hospital train during WWII, and (ii) as a milk van (to hold milk churns).

Thingy Manor had an outing today.  Seemed to go OK.

Friday 28th
I varnished the SR (Malachite) rail chair, but then had an attack of the toothaches, so had to adjourn & visit Sventist (Sven, the Dentist). 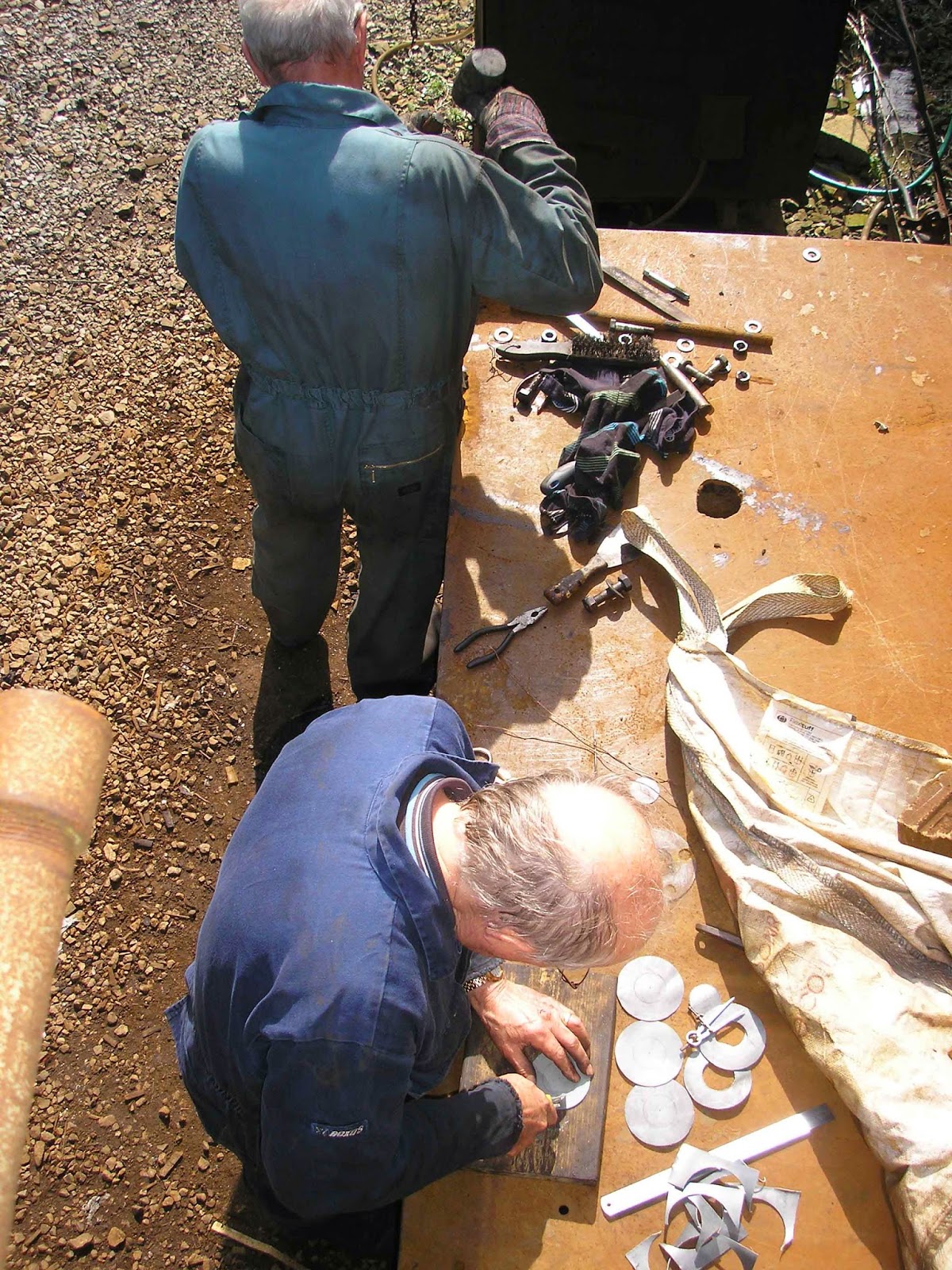 They finished by end of day, and David moved on to modifying new split pins to fit the castellated nuts on the eccentrics.

Gil & Fred popped in (ostensibly to collect some sales items, but it didn't take much to persuade them to stay for elevenses!).

Ingo arrived and I set him on painting toolboxes, mushrooms, etc., on the tender.  Talking of which, you never knew where it was going to be next, today!  First it was along our road, then Bruce lost it because it had moved across two roads and was hiding behind a coach; then I went to take a photo of Ingo painting, and the tender had gone again!  … with Ingo on it!  It finished up inside the shed, with Ingo still painting. I painted 7 black bottoms and enamelled four black tops.  Then Gil helped me remove our notice board from the car park, and I started refurbishing that.

Maurice left a piece of biscuit in my shoe - not sure if this was a peace offering or a reject biscuit!

Fred, Gil & John were playing with the siphon at Winchcombe today.