Tuesday 20th
I thought I had better nip down & slap a top coat on the chairs.  Went by bike*.  Got christened on the way back.

Wednesday 21st
Just Bruce & myself today.  Bruce cleaned the last of the mud hole doors.  A couple of the nuts were a tad stubborn.  Then there is a small threaded hole on some of them.  You see, the doors fit on the inside of the boiler, so you poke them through the oval orifice then secure them with a bridge on the outside.  If you accidentally drop one, it will fall into the water space between inner and outer wrappers.  This can be a shade tricky to retrieve, so there's a loop of thin studding that can be screwed into the hole in the sticking-out bit that will prevent the door from falling inside.  Bruce is cleaning out one such hole in the photo. 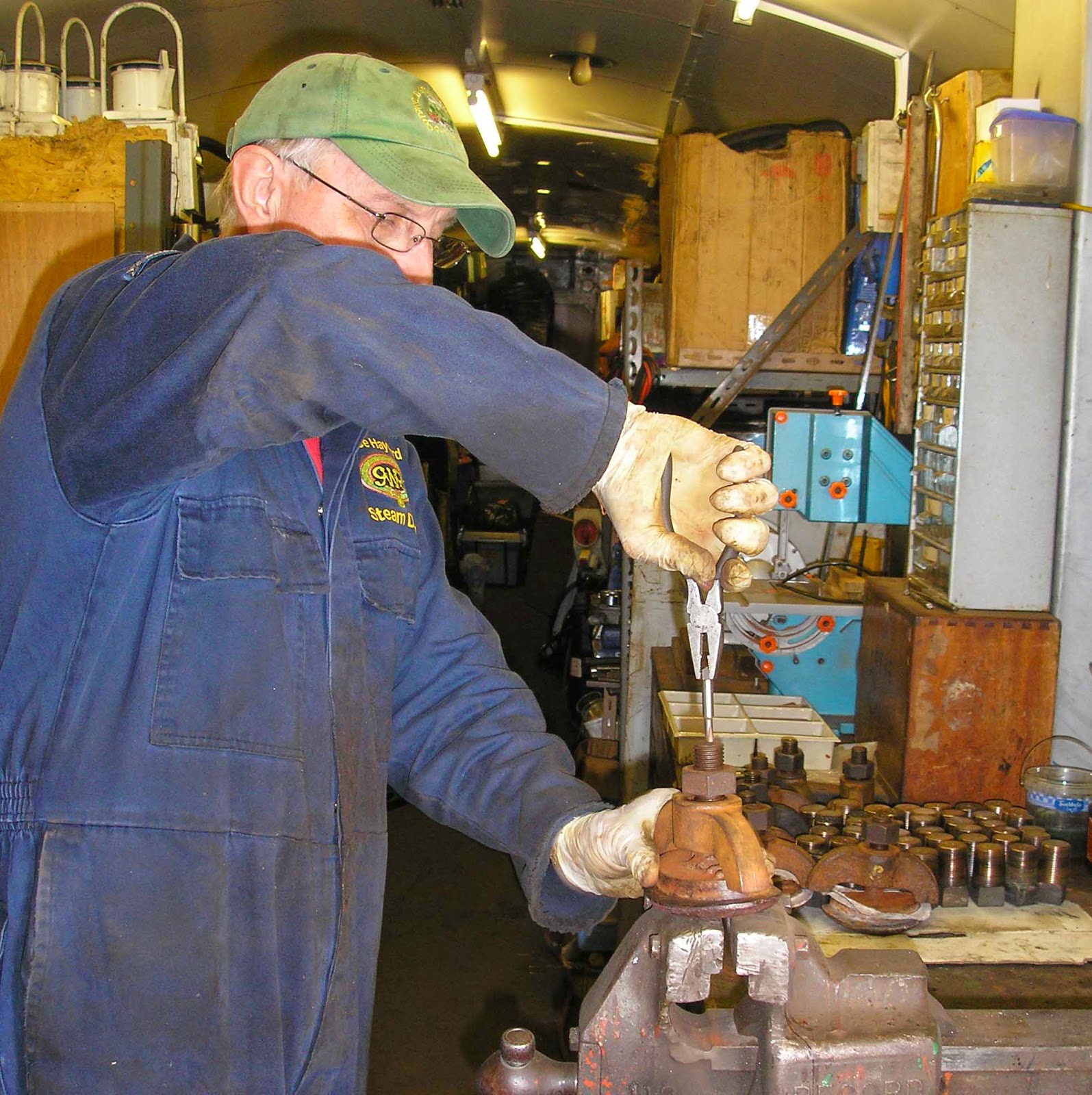 I picked out the lettering on the chairs in gold.  Then I was alerted to a stash of rail chairs discovered by a chap who was strimming the lineside of the narrow gauge railway.  They were well hidden by nettles, but I managed to extricate them and heave them up to just behind the wood store.  When I've got my energy back, I'll move them to our pile.

Just before he buzzed off home, Bruce remembered that there are four ferrules from around plug holes that needed cleaning .. and what has happened to the replacement ones that Carpo perloined from us?  So, I decided to clean them … which only revealed rust … which I wire-brushed … and painted in Deproma.

Apart from that, Bruce & I sat down and drew up a list of what needs doing as soon as 2807 returns.

Thursday 22nd
I nipped down and cut some wedges for the boot scraper brushes, then wanged some brushes into the chairs (q.v.).

Friday 23rd
Preparations for the gala weekend:
-  the marquee hasn't arrived;
-  it's peeing down with rain
-  Tyseley won't be ready for the Thursday delivery

* Last Sunday was my "big bike ride" - in aid of the British Heart Foundation. 40 miles around the north Cotswolds, starting & finishing at Cheltenham Race Course - handy, really, as Ben & I could catch the train to the start and back again afterwards!