Monday 8th
Applied a top coat to the 9 rail chairs that Alistair had primed on Saturday.

Tuesday 9th
I painted the gold lettering on the 9 chairs.  I thought that I better leave the other 15 (the ones with black bottoms) until Wednesday so that we have something to do.  :-)

Wednesday 10th
Bruce & Gil took the front covers off the valve chests.  These need to have new bushes fitted to match the new valve rods.  Gil had had the bushes made, and Bruce set about replacing them.  The first task was to extract the existing bushes; this went easy.  Then, after much measuring of new bush and hole in cover, Bruce attempted to fit the new bush - which is designed as a "press fit". 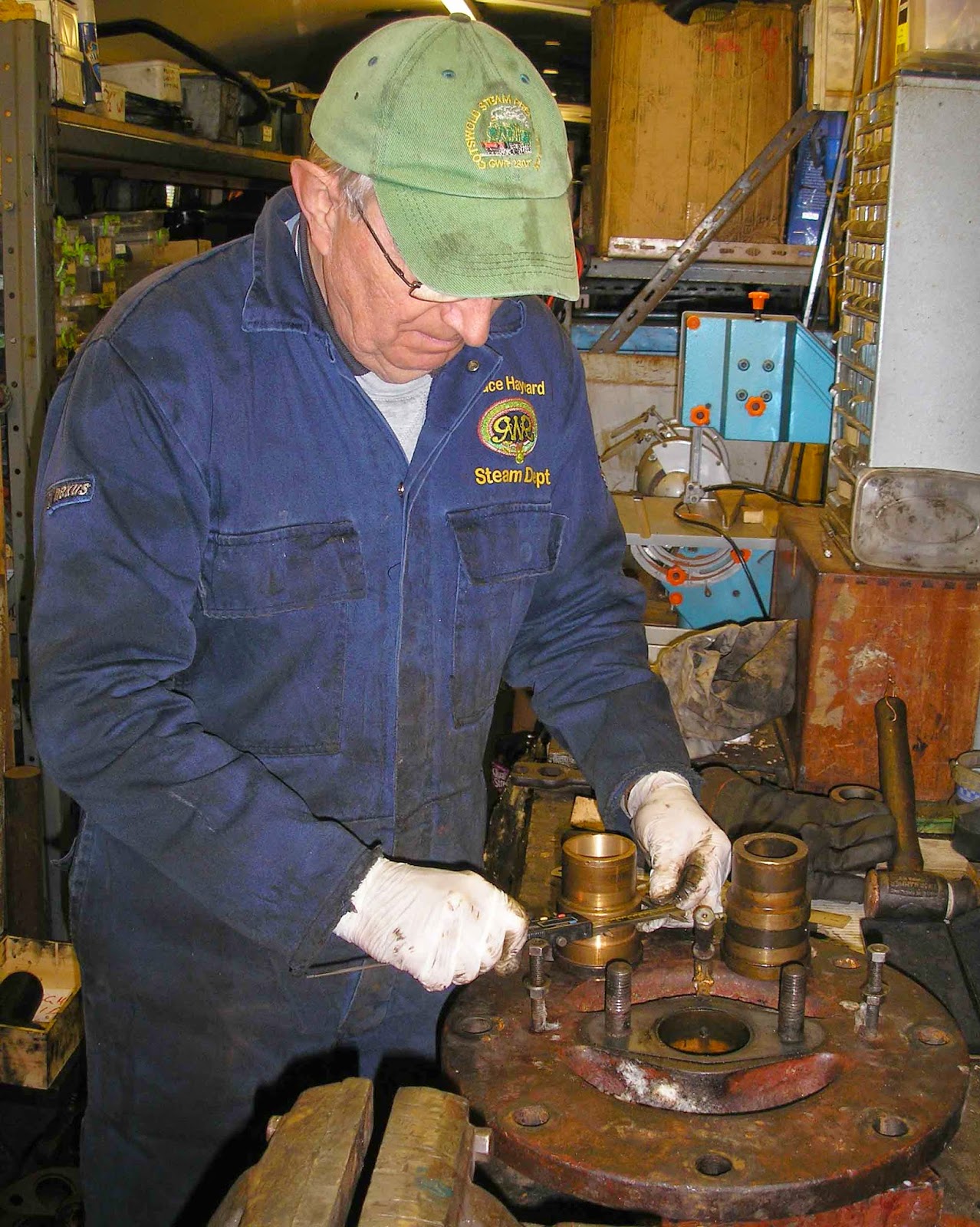 The fitting of the new bush did not go so smoothly. 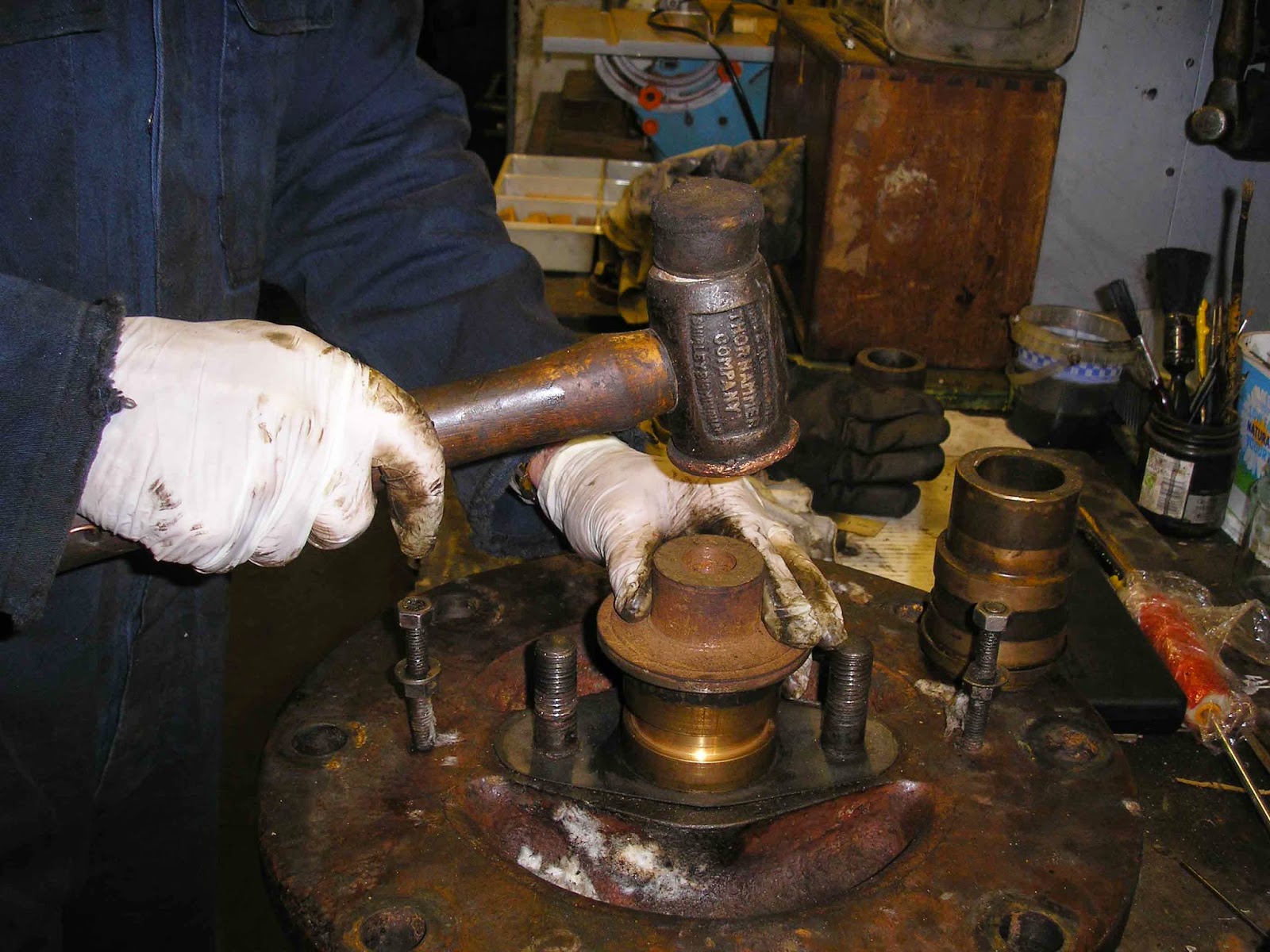 Gil came along and he & Bruce attempted "Plan-B" to get it to fit. 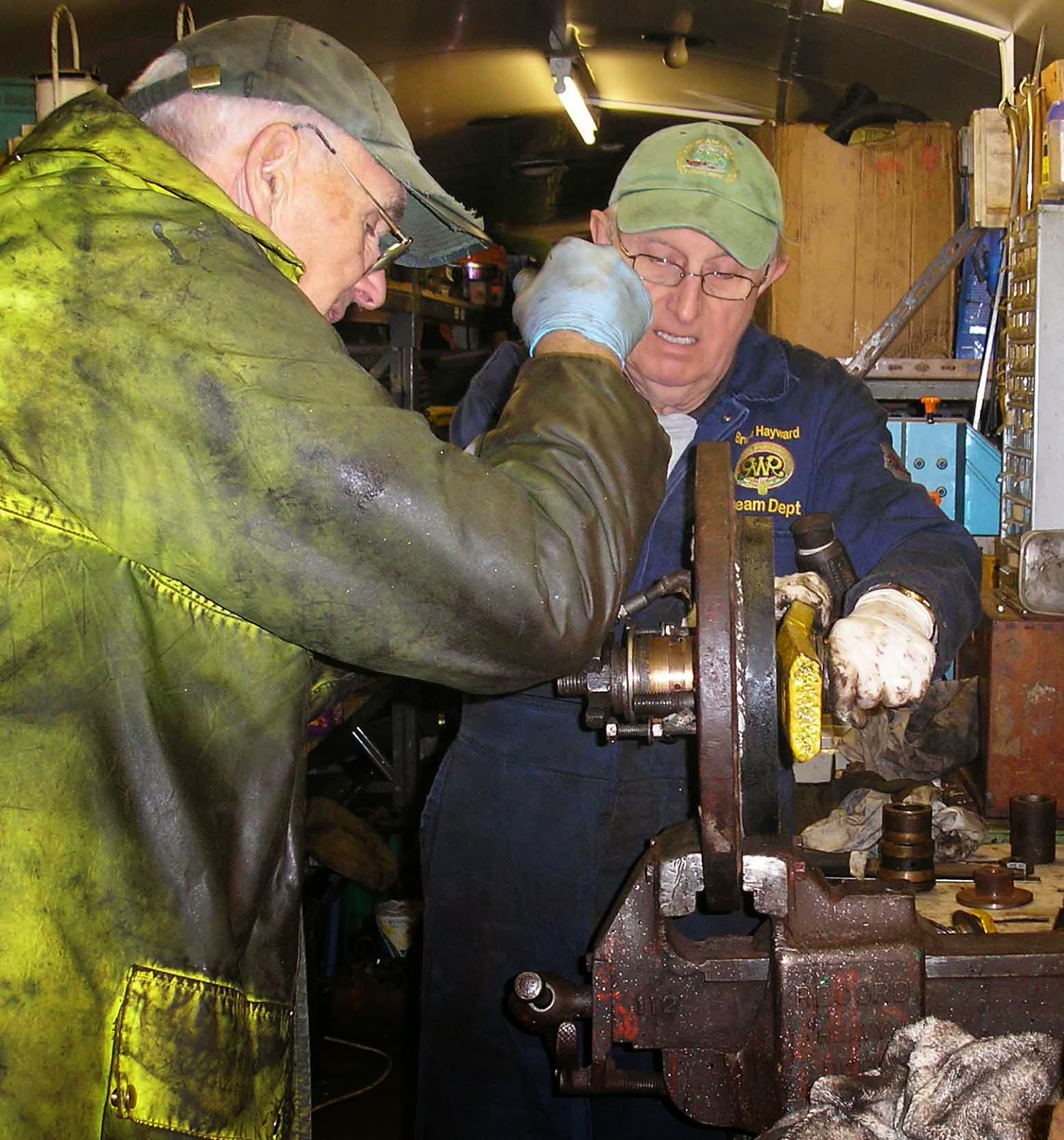 This proved ineffective, too.  After picking up the correct new bush, Bruce made it fit relatively easily!!! 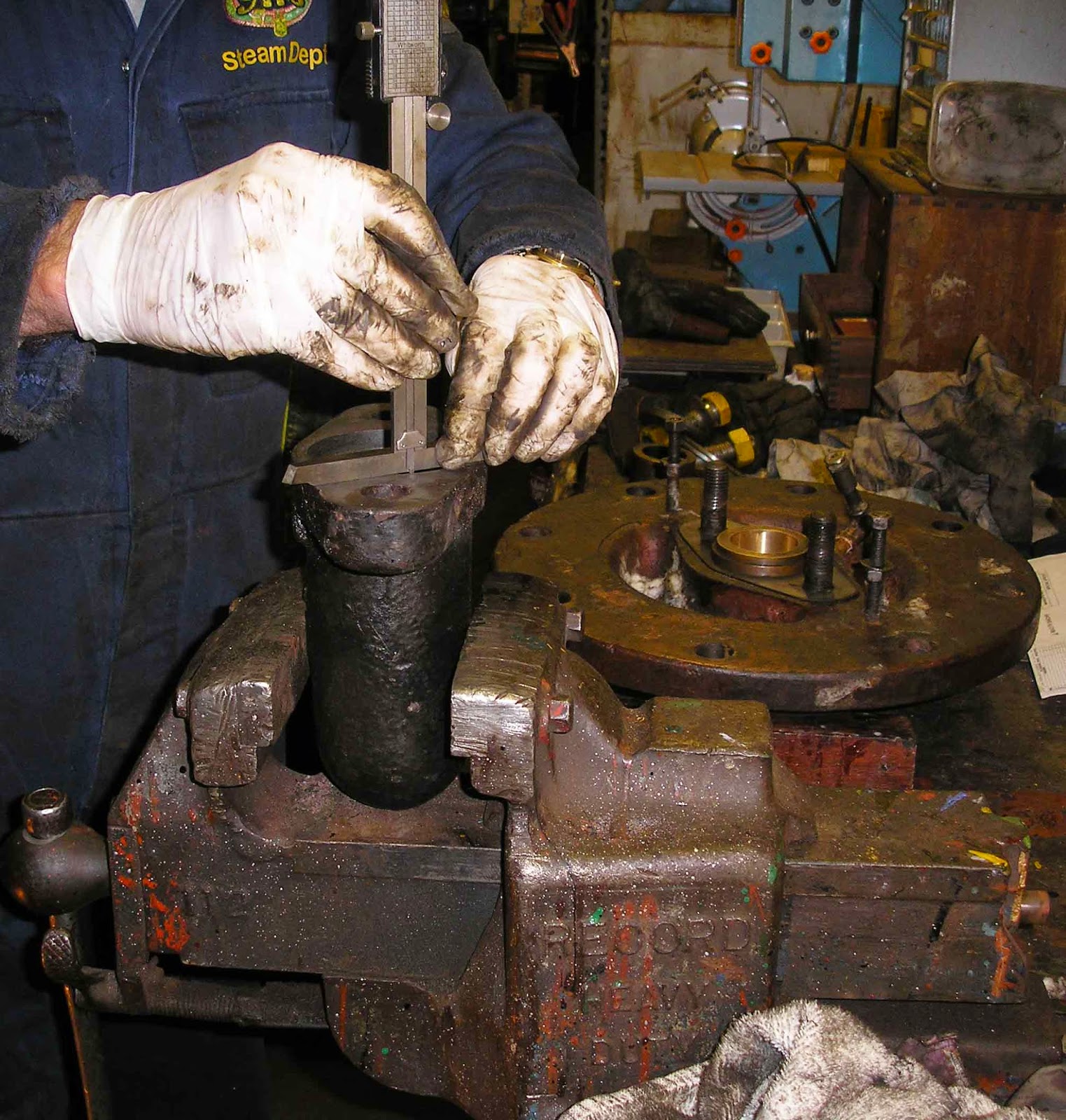 Thereafter, Bruce (with occasional assistance from me) cleaned the threads on the studs and the nuts on each cover.

Meanwhile, Gil had begun working on the studs on the valve chest by which these covers are attached.  Mike joined him, and together they cleaned all of the studs, front & back, on both sides during the rest of the day.

I spent most of the day fitting brushes to the 9 completed chairs and applying a primer coat to 7 green, 3 red and 1 black chair before running out of room and of black Deproma paint.  P-Way delivered 30 more chairs for me!

This morning, as a result of constructing his winter quarters, Maurice had left a pile of debris - which I hoovered up!  At some point circa 4 pm he must have slipped out and taken one piece of apple, and although I sat poised with camera for a while, his shyness prevented him from making centre stage today.

Friday 12th
Message from Phil Grange today to say that he had collected our chimney cap and ash pan rake from the NYMR. He will be dropping them into the GWSR at the earliest opportunity.

Saturday 13th
Gil had had new sleeves and bushes made for the rear valve covers, which he brought today. 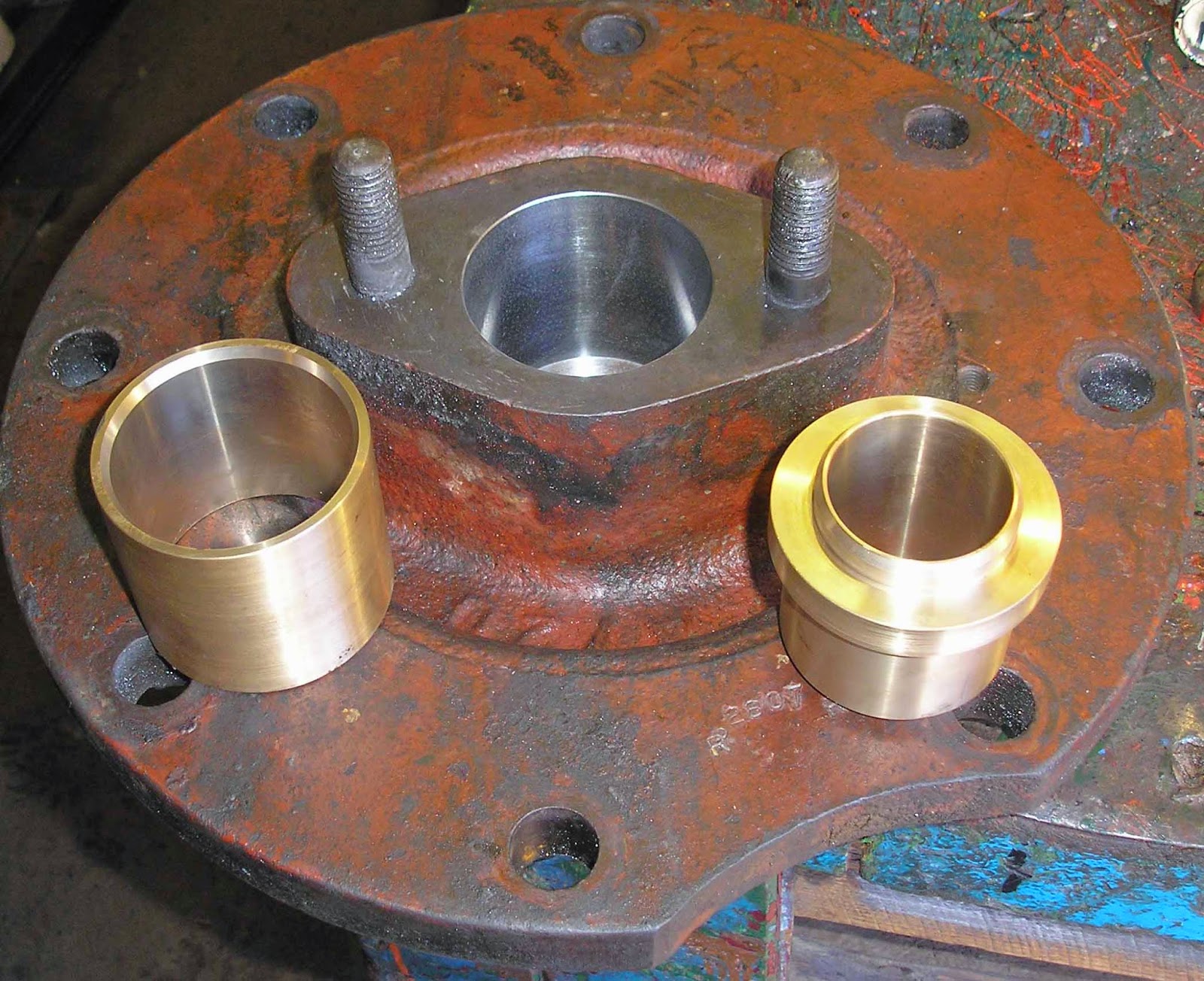 He, Bruce and David fitted these lovely new and shiny bits into the rear covers. 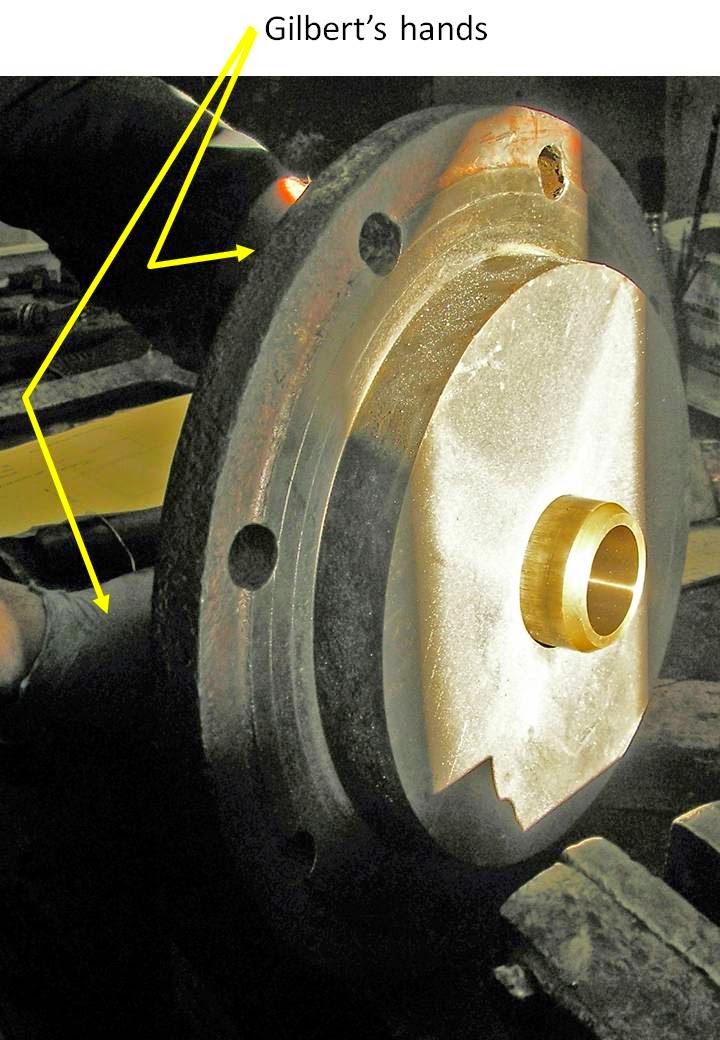 Bruce made gaskets for the covers. 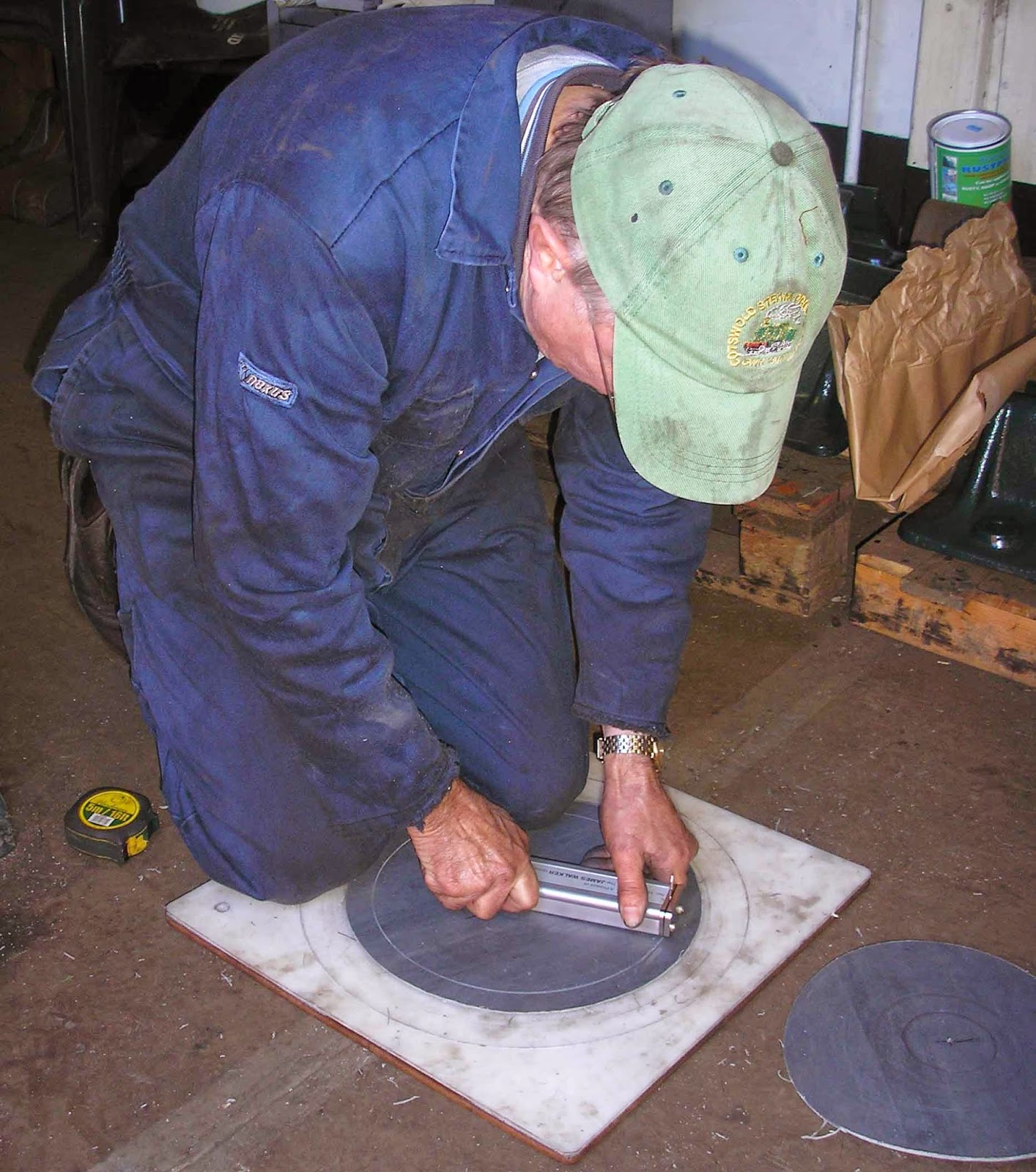 David & John cleaned and refurbished the nuts and replaced three seized studs for the covers. Jeff Lacey [Loco dept] cleaned the joint faces and oiled the valve liners.  Paul Gosney [Loco Dept] helped Gil fit the covers back on, with some assistance from a lead hammer swung by Neil {Loco Dept].

Bruce also re-fitted the drain pipe from the LHS valve chest to the centre drain cock.

Meanwhile, I began by cleaning off loose paint on the valve cladding, ready for a re-paint.  Then Steve & I pressed on with cleaning rail chairs to try to build up stock before Winter Maintenance diverts all effort onto the loco.

Which brings me to Carpo popping in … he would like 2807 to be back in service next weekend !!!

Geof also popped in to see us.  He has major heart surgery scheduled for Tuesday … those of a religious bent might like to say a prayer for him; the rest of us just wish him a successful outcome, and we look forward to welcoming him back just as soon as he's fit enough to wield a spanner!

Maurice had bunged his doorway up with rubbish again.  I hoovered it up, but Bruce suggested that Maurice might want his door hole bunging up.  After all, he's trying to sleep while we are hammering, needle-gunning and generally making a noise!  We had an idea - why not make him a "mouse-flap" (like a cat flap, but smaller)?  Then he can come-and-go, and it would keep some of the noise out.