Thursday 27th
David reports:
"I visited Tyseley today to take the valve crossheads for fitting to the new valve spindles. After cleaning these, and other items, yesterday we discovered that the white metal on one of the crossheads was coming away from the top surface. The crossheads were slid into the slide-way assemblies and were found to be extremely sloppy.

It was therefore decided to take both parts to Tyseley for advice, but that no action would be taken by them until Gilbert had spoken to them.

On showing Alastair the assemblies he agreed they were quite loose fitting, but said they could not remedy it at this stage as they did not know the exact position of the valve spindle bore in the crossheads relative to the position of the assembly when fitted to the main slidebars. He also thought that the wear on the slidebar brasses was much more on one side than the other, indicating a possible misalignment. He added that this might have contributed to the wear on the valve spindles. The assemblies may well also need some new brasses as well as white metal. The white metal on the lower surfaces, besides being rather full of cheese-like holes, was satisfactory.

He said that to effectively rework the sliding surfaces would require us to refit the slides to the main slidebars and put a wire centrally through the valve ports and measure accurately the offsets in both vertical and horizontal directions. We agreed at this stage I would return the slidebar assemblies to Toddington and probably, for the moment, leave well alone and bear this in mind for the future.

He commented that much of the work had been done on the valves and they will soon be ready for reassembly. He took the crossheads for assembly to the valve spindles." 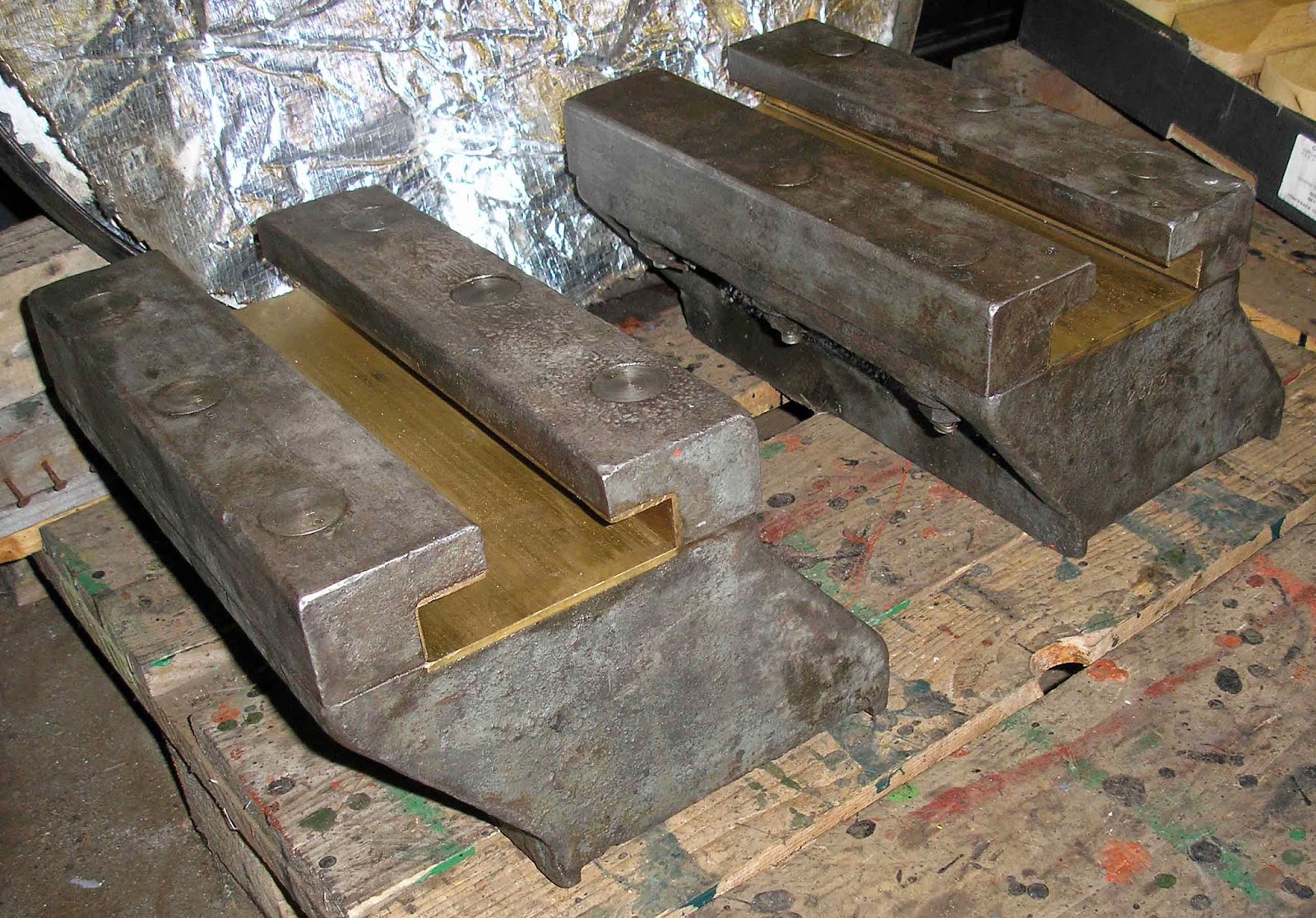 I called in at Todders to pick up 6 boot scrapers in order to restock the Winchcombe trolley on Friday morning.

Saturday 29th
David returned the valve slide bars.  These need measure in situ to determine if the valve cross-head runs at the correct height for the valve rods.

David spent most of the day cutting the seat of the steam valve inside the ejector (in the cab).  John was helping by applying pressure to the cutter as David turned it.  Bruce commented on the groans coming from within the cab, and was not sure if it was the cutter or David!

Gil & Bruce removed the LHS cylinder cover to examine its innards.  Fortunately, no damage was evident.  Gil measured the internal diameter (on various axes) and determined that there had been normal wear, though we didn't know whether that is recent or not without checking against previous measurements.

Dependent upon the readings at the time, it is anticipated that at the end of the 2015 season, we will have to give consideration to renewal of the pistons because of excessive clearance between the piston and cylinder wall. At the same time measurements were taken of the cylinder bores. When evaluated the readings were found to be inconsistent with previous results and will require re-checking during the winter shutdown."

Bruce spent some time measuring the valve cover, because these need to have new bushes fitted.  The style of ours doesn't seem to match either of the patterns for which we have diagrams (nothing new there!).  Consequently, Bruce has drawn up how ours actually is, and will then work out what needs to be done to get the new bushes to fit and make up to the "standard sized" valve rods. 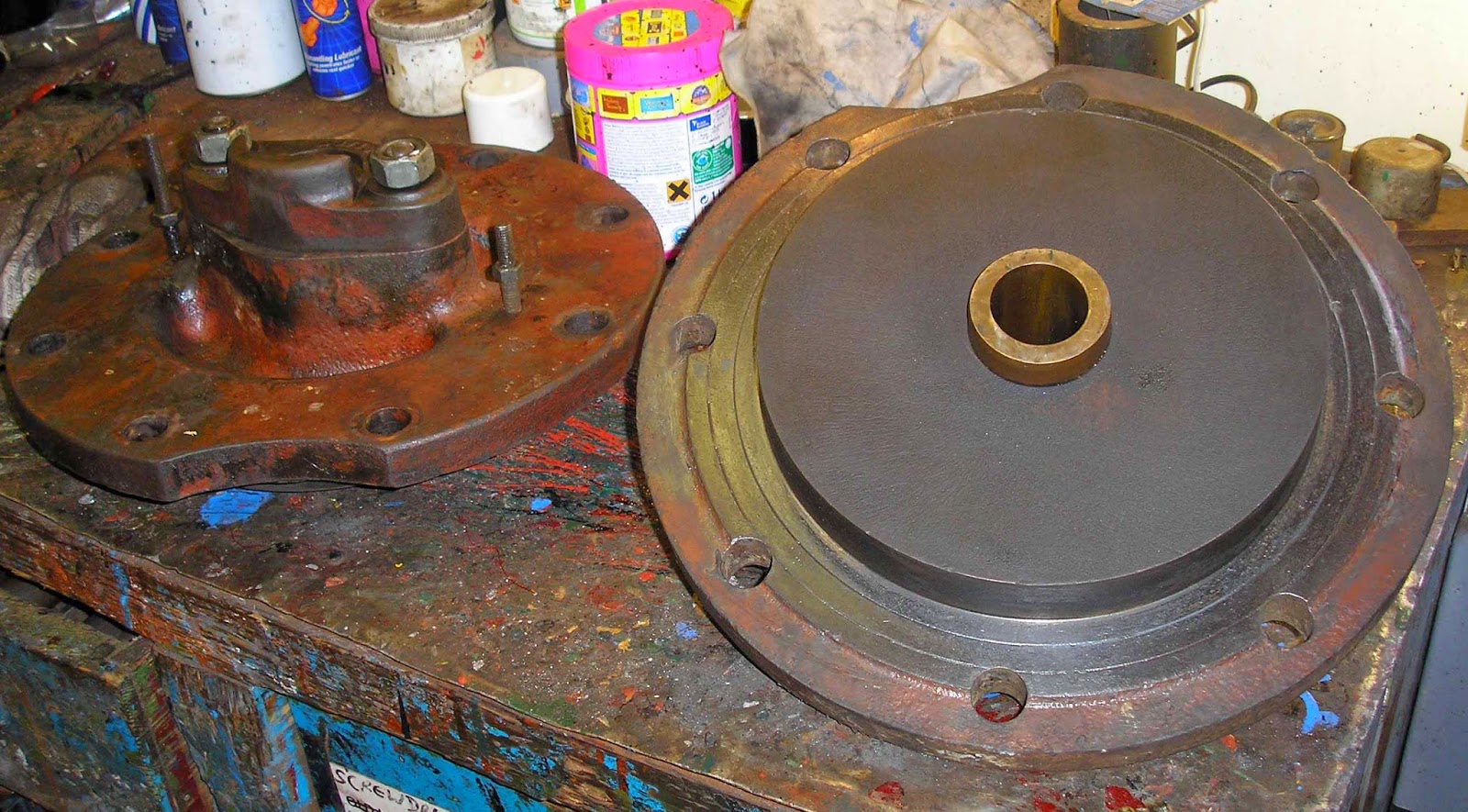 I was conspicuous by my absence (except that I was there just after 9 am to feed Maurice, check boot scraper stock, as I have had three email enquiries, and restock the F&W; and again just after 3 pm to make sure the chaps were not slacking … and they weren't!).

Sunday 30th
I decided that the boot scraper stock is so low that I just had to make a start cleaning some more rail chairs.  I managed four during the morning.  When I got home, there was a message from Winchcombe station - they had only one boot scraper left!  A hasty lunch was followed by a second trip to Todders to pick up five more to take to Winchcombe station!

Last week, the F&W sold 8 boot scrapers.  On Friday, I put 6 in the Coffee Pot - by Sunday lunchtime, there was only one left !!

Wednesday 3rd
Bruce has spent two-and-a-half days working on drawings for our valve covers and their bushes. Sometimes I wonder if there is truly such a thing as "Swindon Standard"; or maybe there was in GWR days, but it all fell apart under BR?  Anyway, Bruce & Gil pored over Bruce's final design plus instructions for the manufacture of the bushes and an additional sleeve (to return the hole to the correct diameter!).  They took the old bushes out, and Gil took the two rear valve covers off to get them brought up to spec.  He's using a local machine shop.

The LHS centre drain cock pipe that was blocked had been soaking in diesel for a week, and Bruce & Gil managed to clear it out, today. 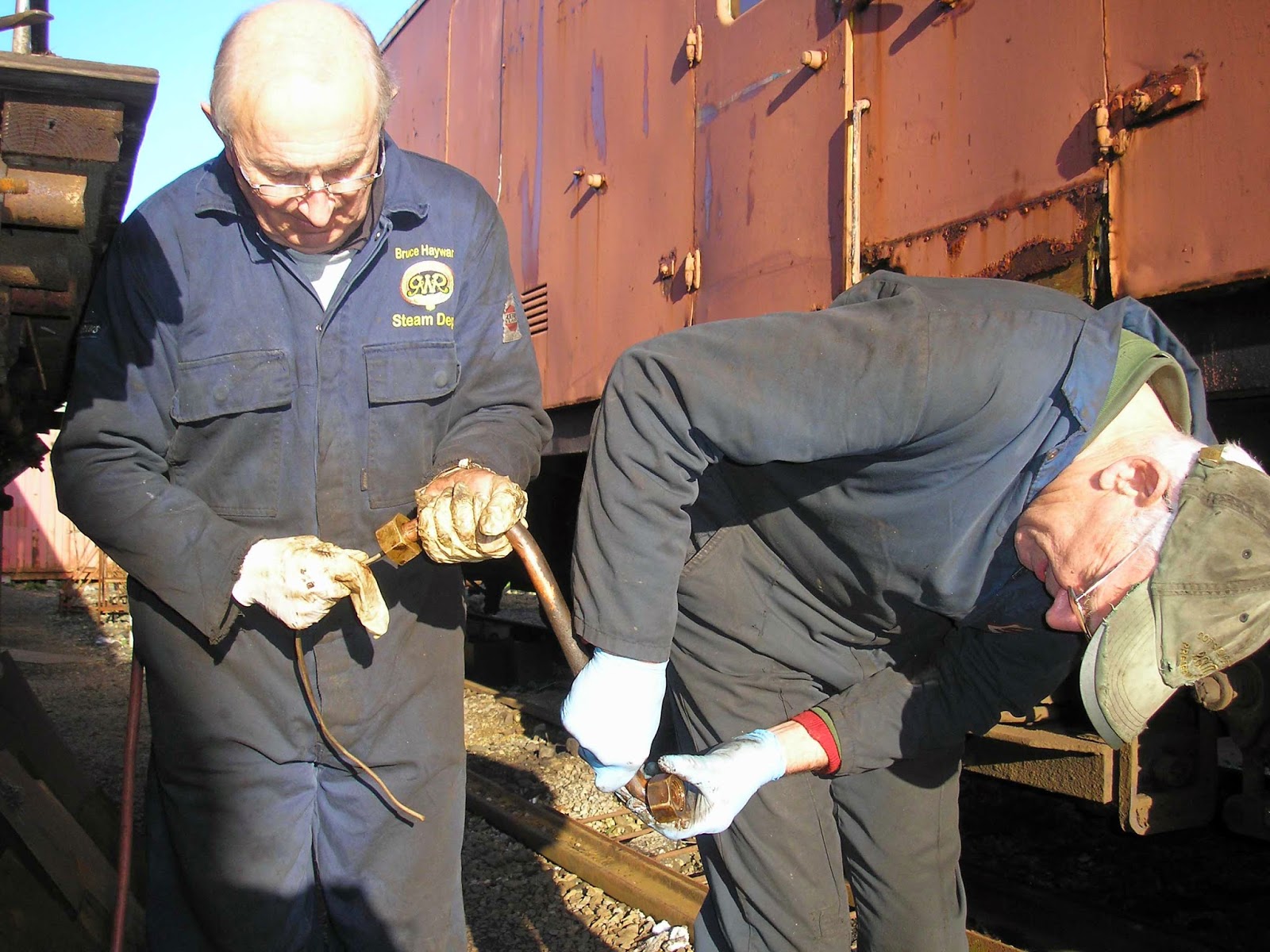 There was a thought that possibly the valve had not been opening sufficiently, as all three are operated by the same rod.  So, Bruce modified the lever by adding a bit of "packing".  Someone welded it on (not sure who) for us, and Bruce refitted the rod. 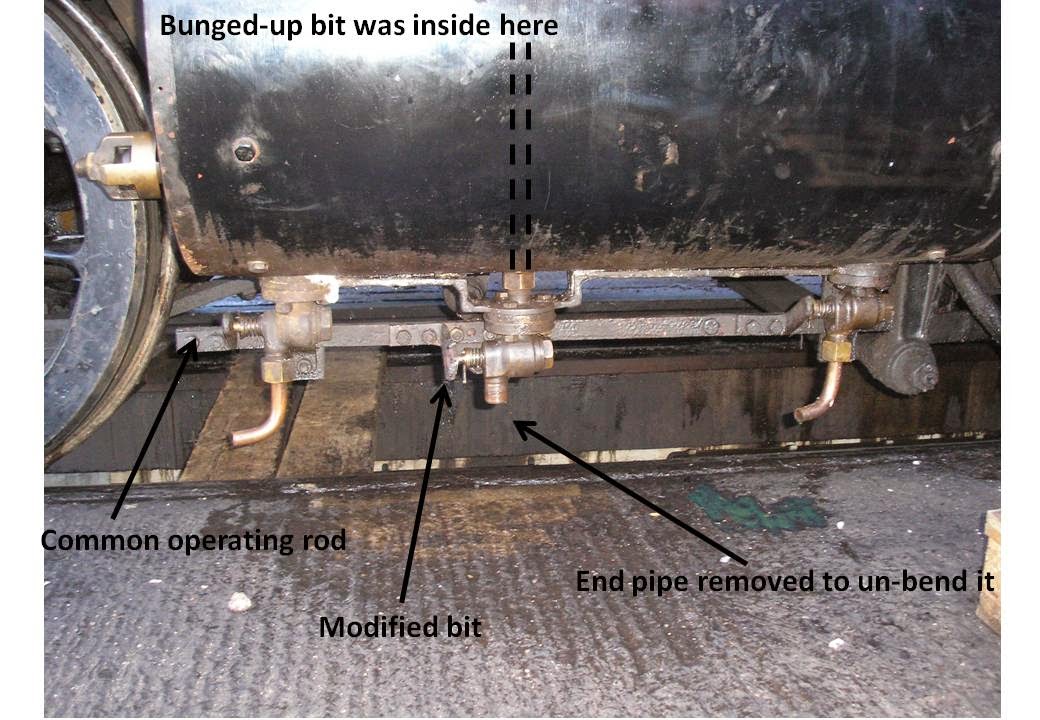 The pipe was tested in situ using water, and that flowed happily, so then a good squirt of oil was injected into the valve's steam chest.

Finally, the short outlet pipe appeared to have been "inadvertently modified" (e.g. by clouting something), and Bruce managed to open its end out such that it almost looks circular again.

Meanwhile, I spent the entire day cleaning up rail chairs in a desperate attempt to get some stock available for the demand.  Well, I say "all day", I started by hoovering-up after Maurice, who had been playing with some polystyrene over night and left little white balls of it all over the floor!  Nine chairs are now sitting, black bottoms up, in the TPO.