Saturday 22nd
Graham joined us to work on 2807.  Several other people from the Loco Dept also joined in because it was so exciting!  There were enough people to work on both sides simultaneously - removing running boards, inspection flaps, valve covers, and finally the valves themselves.

The RHS came out first, and did not seem to be in a bad way.  The rear valve head was as dry as a bone, which supported Bruce's theory that the current lubrication method at the rear is ineffective. The liner does not appear to be scored at all, and only the smallest faults exist on the valve head rings.

When the LHS came out, you could see immediately the huge area of the front head's ring that had disintegrated (see photo).   Gilbert adds: "Subsequently, further examination revealed that the valve head was loose on the spindle and that the location nut had a crack adjacent to the taper pin hole." 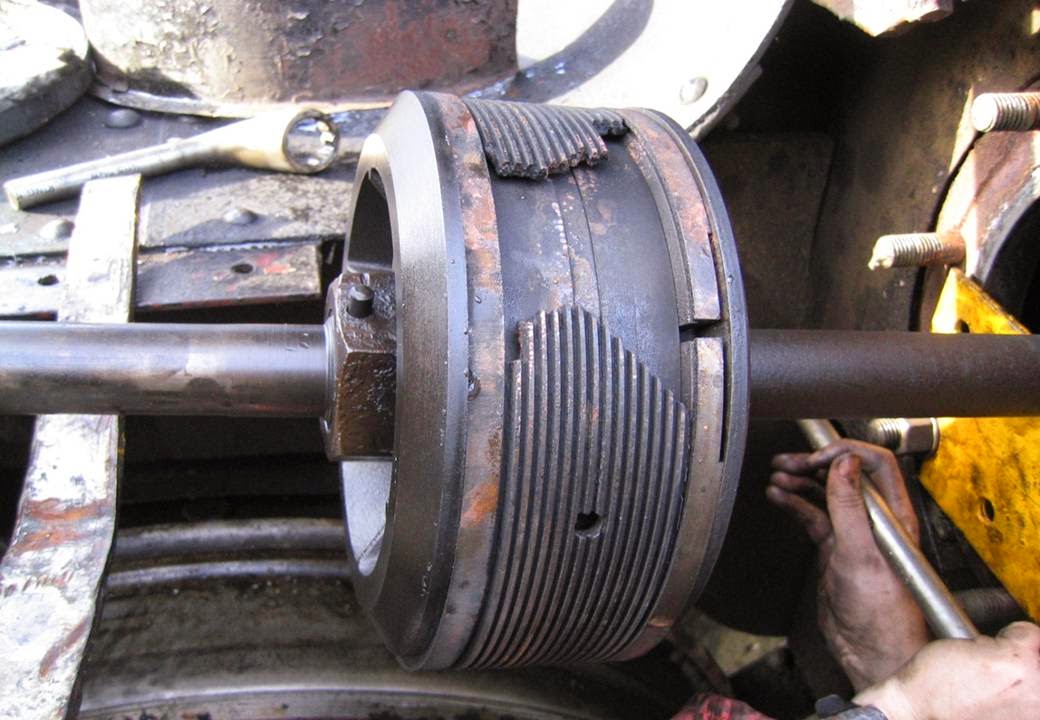 Furthermore, there was a lake inside the valve chest.  There should not be standing water in here!  It transpired that the drain (down to the middle drain cock) was completely blocked.  It could have been the presence of this water that contributed to the head failure. 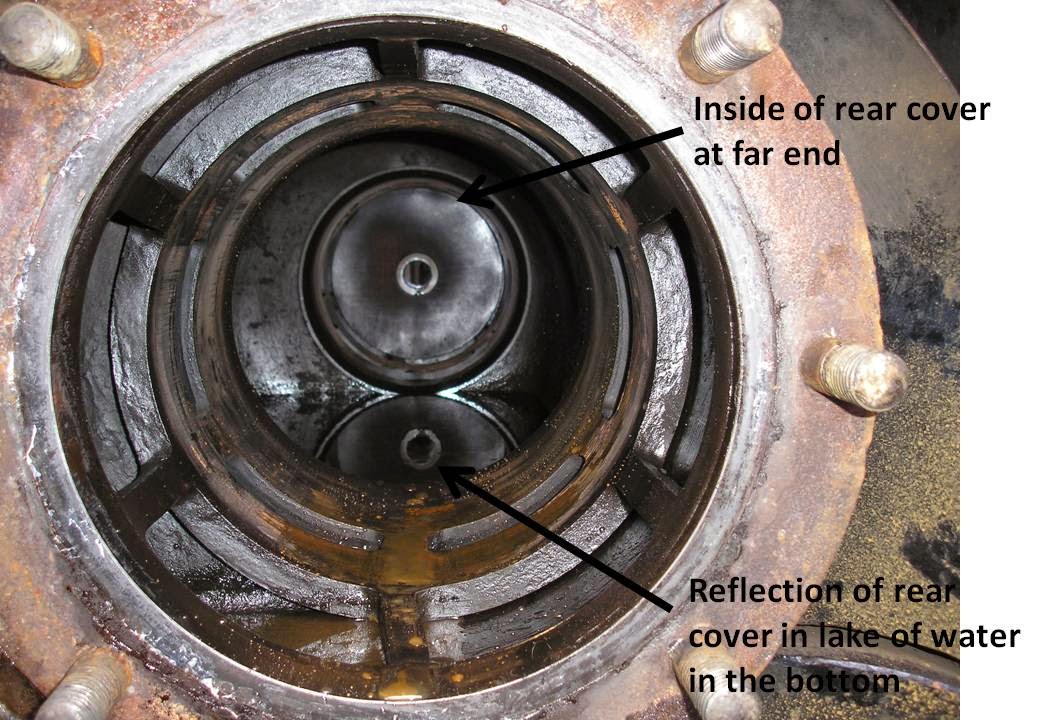 Gilbert continues: "The back cover was removed from the valve cylinder to enable the rear liner to be inspected, and to allow internal measurements to be taken for the back liner. As before, it was necessary to remove the auxiliary crosshead slide rails and the piston rod lubricator from the top of the Slide-bars in order to remove this cover."

Since we are half-way though the 10-year ticket (near enough) the decision was taken to get new rings and fit the new valve spindles (that we have already purchased).  The new spindles are case hardened to reduce wear - wear that we had discovered on the existing spindles a year ago.

Sunday 23rd
I popped down to paint some of the lettering on the chairs in the boot scraper production line. Maurice had pinched one of my cardboard notices (that says what colour to paint rail chairs) and had attempted to drag it into his hole!  It won't go in.  I left it - it will keep him amused.

Monday 24th
Gil, Bruce & I arrived at Todders circa 09.30, to load up the old valves plus the new valve spindles into Gil's car for taking to Tyseley.  Gil reports that after a brief consultation with Carpo and a chap from 5542 about wear and ovality, and if a re-bore is required, "the clear advice which emerged was to fit new rings to suit the existing measured bores. In view of the fact that we have run approx. 20,000 miles on the rings which have now failed, it was predicted that a set of replacement rings might well last until the expiry of the current boiler ticket". 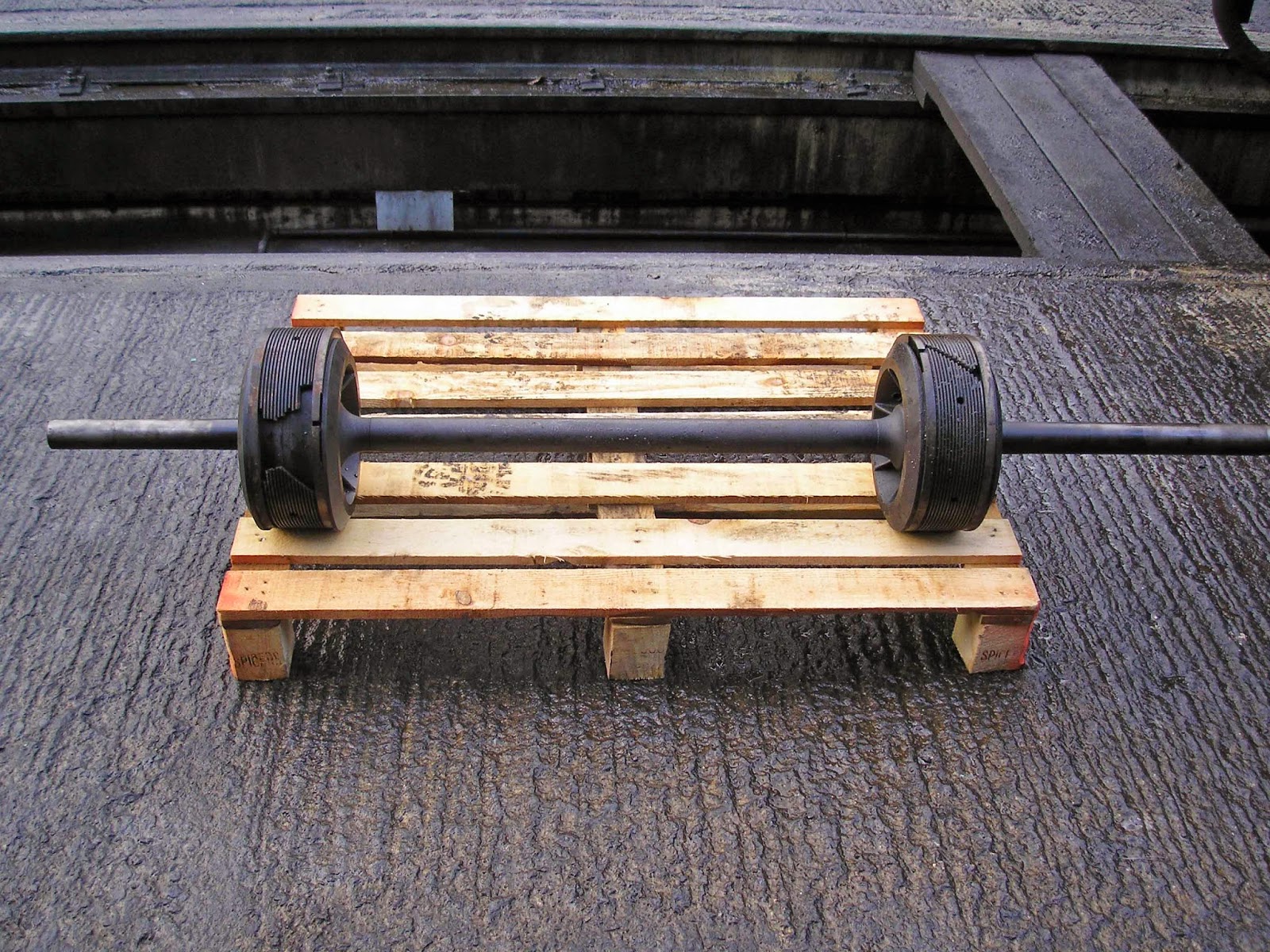 Gil, Bruce & I loaded the old valves plus the new spindles into Gil's car, and he & Bruce set off for Tyseley.  David joined them at Tyseley.  Bob & Alistair Meanly (Tyseley) examined the valves and Gil says, "that they expected to be able to rebuild the valves onto our new valve spindles within a period of about two weeks.  David will collect the two auxiliary crossheads from Toddington on Wednesday and deliver them to Tyseley so that they can be fitted to the new valve spindles. This will help to position the valves relative to the crossheads and maintain the existing valve timing".

Tuesday 25th
Rain curtailed my gardening, so I popped down to fit brushes to chairs, and ensure we have enough ready to restock Winchcombe and Toddington for the Santa period - which starts this weekend!

Wednesday 26th
Bruce & David arrived first.  Bruce spent much of the morning with the chaps who were inspecting and approving (or not) all the lifting gear.  Pete [Loco Dept] joined us and started steam-cleaning various bits of the loco.  David had a go at cleaning the valve convers, cladding and the valve links - some of the paint went AWOL on the cladding as he did it!

I arrive mid-day, but seemed to do little before we broke for lunch.  The bits that David cleaned were moved into the TPO for safe keeping (and/or re-painting).  Bruce pored over diagrams and measured the seals in the valve covers.

Tyseley had asked for the valve spindle crossheads to be sent up to enable them to align the new valves exactly to the old ones, thereby maintaining the existing valve settings.  We figured that they might also need the corresponding valve slide bars for the crossheads, so David & Bruce took them all into David's car for transporting to Tyseley.

Mike & I tackled the LHS cylinder cover retaining nuts.  We want to inspect the cylinder liner to ensure no damage has been caused by the fragments of valve ring.  However, we couldn't remove the cylinder cover because it needs some lifting tackle.  Whilst our tackle is good for lifting, the release mechanism was seized, so it wouldn't lower!  David decided to have a go at unseizing it, and I assisted him (mainly by holding things as he hit them or squirted Plus Gas at them!).  It took some puzzling, but he did it!  And the Tackle Inspector was most impressed!

Finally, I assembled the last 5 boot scrapers before it was time to go.

Next Saturday, we should be able to remove the cylinder front cover; also the centre drain cock pipe needs cleaning out.  The old bushes need removing from the valve covers and the new ones fitting. So, there's still plenty to do!