Anyone notice how the only references to NYMR's gala in Steam Railway magazine featured 2807?  See page 109 in November's edition.


Saturday 8th
It rained.  2807 was over a pit, but you couldn't get into the pit because 2807 was over it.  In due course, Mark Young came and did some shunting for us.  Plan A was to squeeze loco & tender together using the shunter to push and handbrake + chocks to hold the tender.  The whole thing just slid along the wet & greasy rails!  Plan B then pushed loco & tender up to coaches in the siding and use them to squeeze up against.  That worked, then loco was pulled back over the pit, leaving room to clamber down the steps into the pit … which was full of water.

Before this I had slid into the firebox to check out the fire bars and clean out the ash.  I had to get out and assist with the shunting, but then scrambled back inside again (at least it was dry in there!).  There were two bars missing and one too badly worn to use, so we had to replace these three.  There were two suitable ones at the side of the pit and the third was on the tender … down the siding. 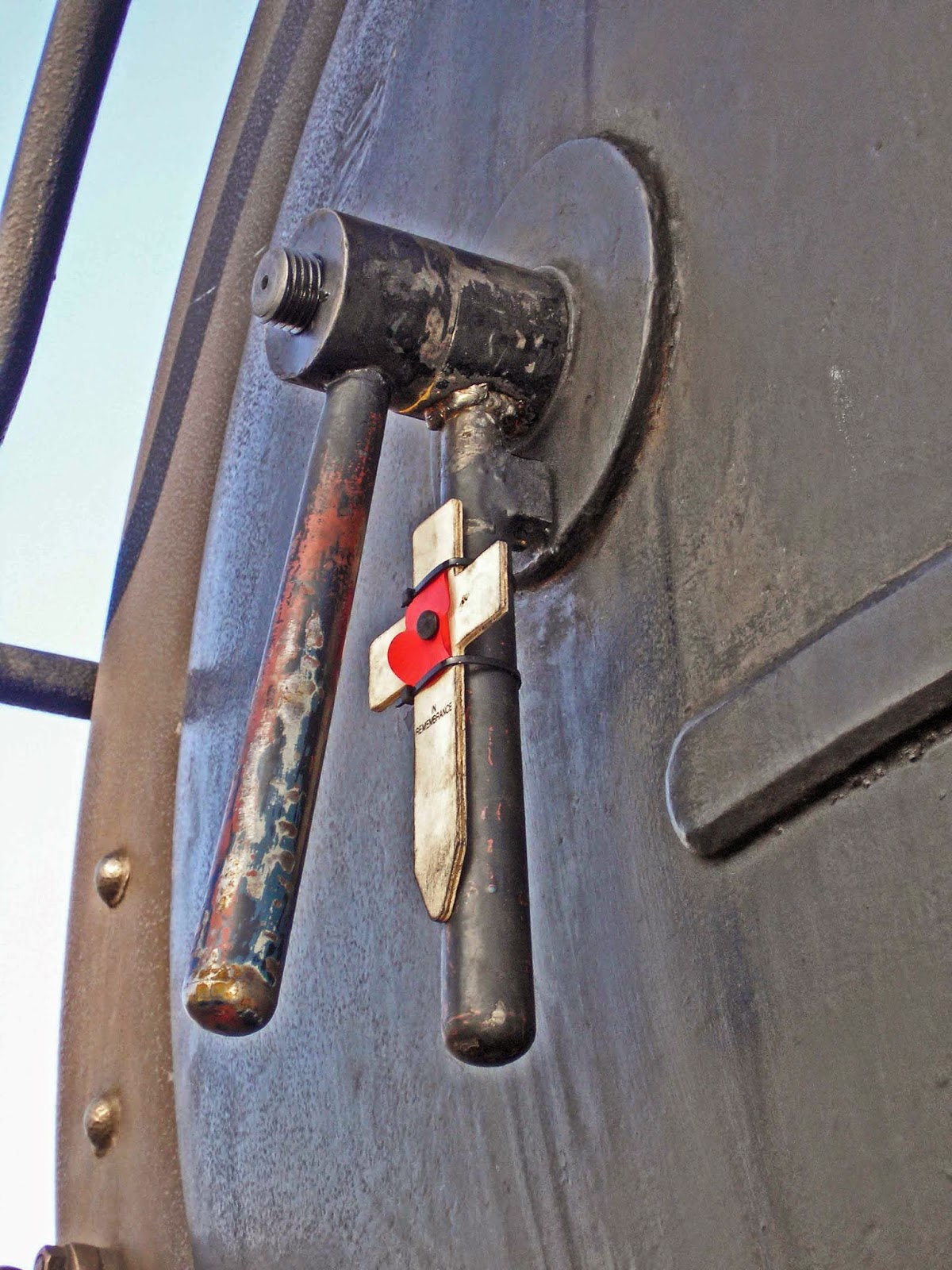 While in there, I could see that the rear section of the ash pan had gone all religious.  Gil got underneath to confirm that there is an enormous hole running the width of the rear section.

The excitement of the day, however, was unbending the bent link.  Bruce The Sleuth figured out that NYMR had failed to get the pin through the slot in this linkage, resulting in the link becoming jammed against the pin and as the loco traversed pointwork, the link was bent .. first one way, and then the other.  So, 2807 had run the whole time without this link in place between loco and tender.  Clive acted as Lucifer, while Bruce (after training from myself) was pyrotechnician (i.e. lit the flame).  We ran out of oxygen … took the empty cylinder back to the cage … there was no new full cylinder there!  Clive found one from someone who had been using it but had gone to lunch, so heating recommenced.  Well, once he (or was it John) found the reset switch on the gas blow-back-prevention-valve, that had triggered when the flame exploded because of the oxygen problem. 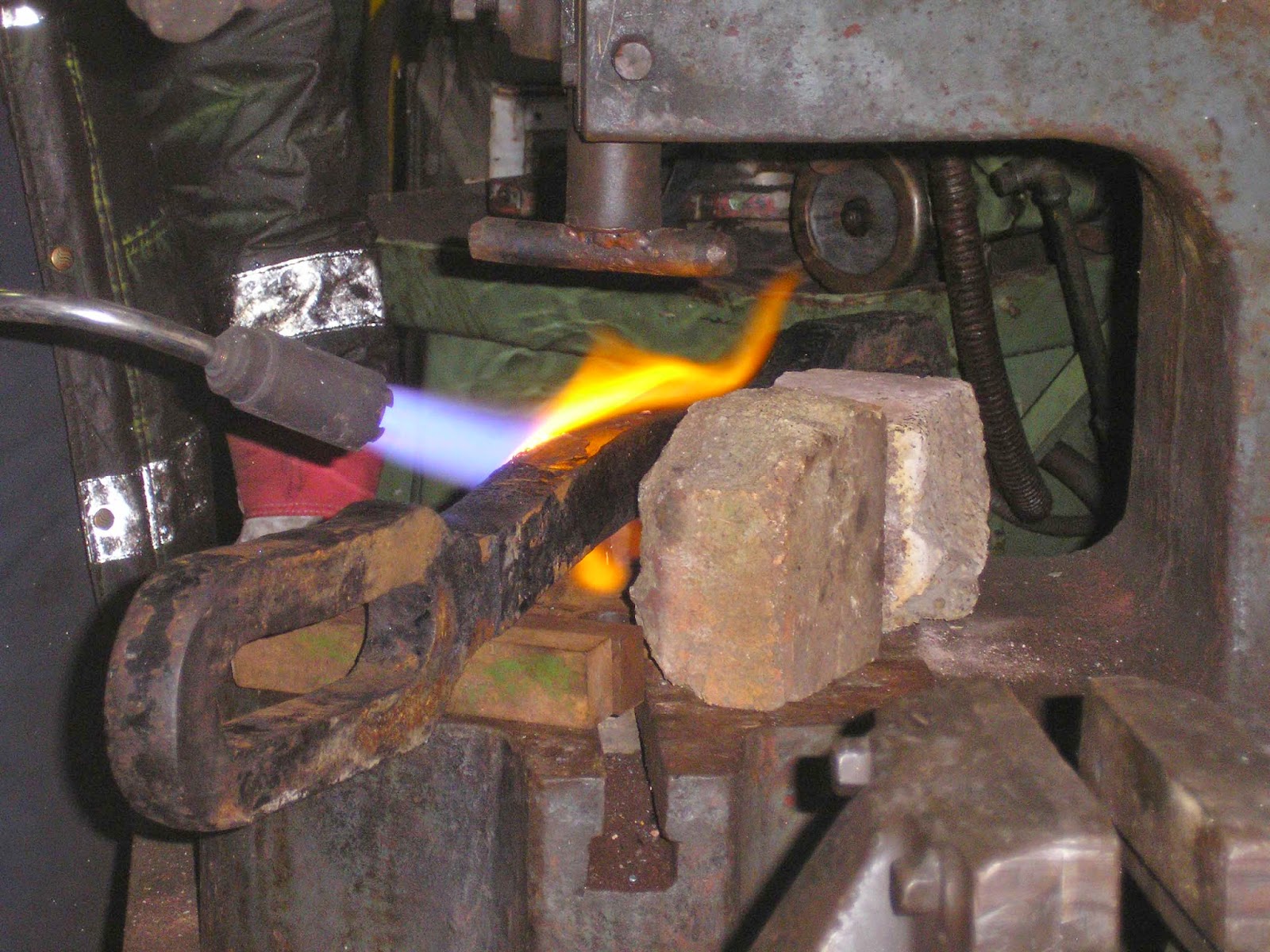 Anyway, the three of them managed to straighten the link and also open out the slot at the one end where the damage had caused it to close up a shade. 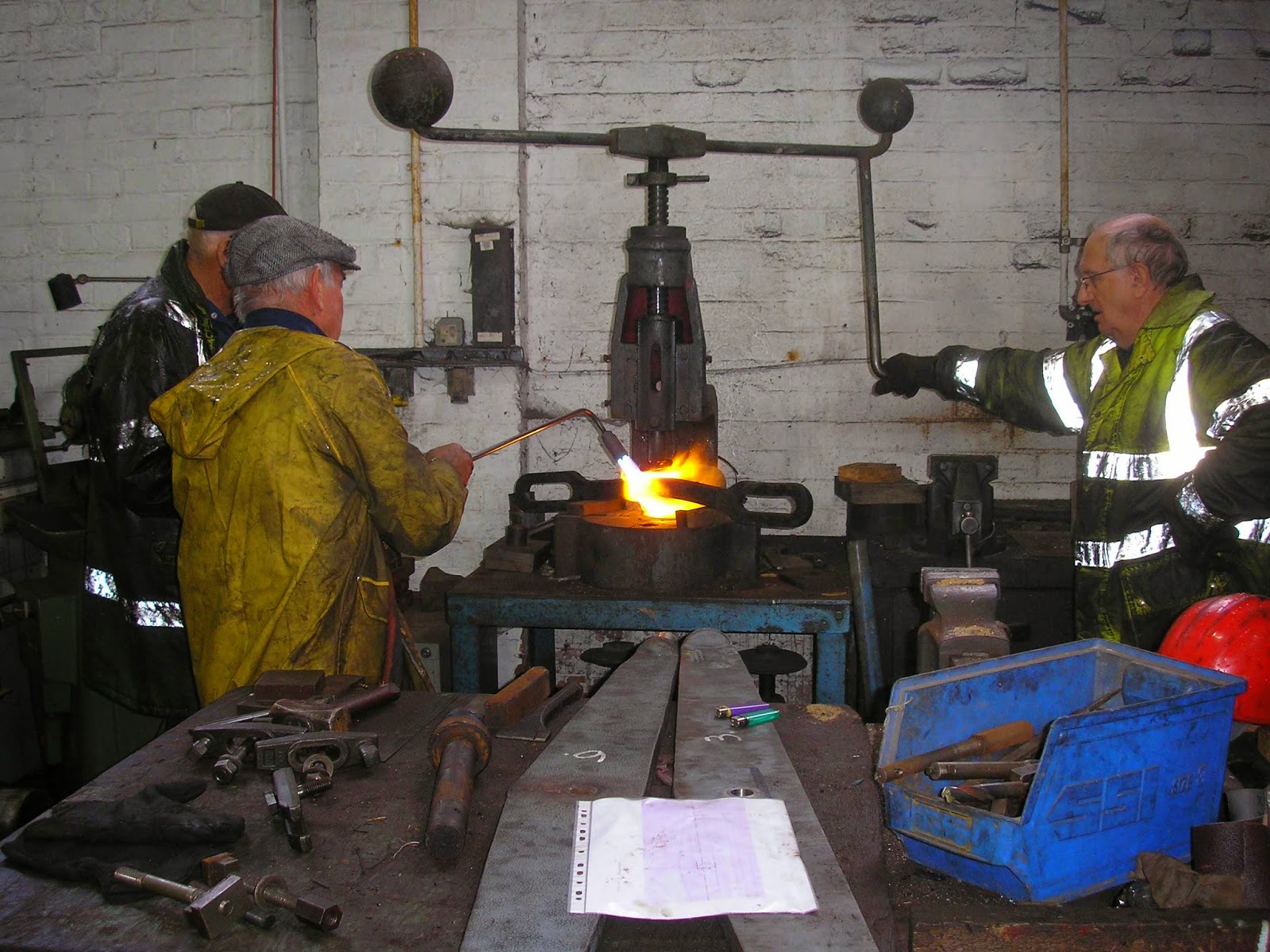 Meanwhile, feeling a tad spare, John & I retired for lunch.  While make the drinks, I noticed that the three pieces of chocky biscuit that I put down for Maurice first thing this morning had disappeared!  While we were in the workshop, Maurice had taken his biscuits.

When the link cooled down, Bruce discovered that the slot was still not wide enough on its full length, so while he & Gil & John went back to check underneath the loco, I opened out the gap and then slapped black paint on the link.  BG&J reported back that they could see nothing amiss.  One NYMR comment about the leaves of one spring being out of alignment didn't seem to be a problem.  They couldn't see the marks that they had painted on the wheels & tyres before going to NYMR - this had been done to check that the tyres had not slipped round the wheels due to the heavy haulage while at NYMR.

I remembered that I had only loosely fitted the nuts to hold the bell cover in place, so went and tightened those.  And that was about it for the day.

At the Winchcombe end, Colin reports:

" I thought that we would go and help Fred at the siphon today as everyone might be getting 2807 back to working order after its holiday, and right I was - Fred was on his own, outside with rain running on him trying to fit a strip of wood by the recently fitted door post.  In the end he gave up as it was raining so hard, so he started measuring up the first of the new door frames ready for cutting.

Ann had a very bad cough.  Although willing, she thought it would be better not to breath in the paint fumes and the dust that Fred created working on the door frames so she sat in the car with the dog.

I started painting in the corner nearest Toddington that had first been repaired with an off-white paint which will be close to the finish we want unless someone knows that it should be a different colour -- rose pink perhaps!

Anyway it took two, sometimes three, coats to cover the dark brown and dark grey we had put on as undercoat.  In the event it now looks pretty neat; it's all one colour and amazingly light and is really beginning to look the part .

It did dry up later and Fred carried on outside and I  finished early to take the patient home into the warm.  How the guys on the engine handled the rain I cannot imagine: it was horrible well done them!"

Sunday 9th
Before the Remembrance Day Parade in Winchcombe, I nipped down to Todders to paint the other side of the missing link.  The loco had been pushed up against the tender, but not coupled.  She was also being drained of the remaining Yorkshire water.

We will press on on Wednesday, and get her ready for service on the race day trains.