Final recorded issue:
50 [NJC] Puff of steam from air valve when ejector turned on. Steam leak on back of cone?

Saturday 3rd January 2015
The postman brought a package this morning addressed to: "Maurice, c/o R.Molesworth, Hydaway Cottage ….".  Inside was a Happy New Year card from Muriel Mouse, resident with Ken & Liz Always-Jones!  Wasn't that nice?  Even nicer was the bag of Harry Hamster Treats.  I'm sure that Maurice doesn't know where Dorridge is, otherwise he'd be off … and who knows what that might lead to !!!

It was not the sunniest of days.  In fact, it drizzled most of the day.  2807 was pulled out over the pit (to take full advantage of the rain).  And as it was not wet enough in the pit beneath 2807, Bruce opened the blow-down valve to drain the boiler.   Gil, Bruce, John & I  started on removing the brake blocks and fitting the new ones.  I would guess that a brake block weighs at least 56 pounds (25 kilos).  It has to slide up around the rim of the wheel and into the hanger.  Then the holes in hanger and shoe have to be aligned; a pin then passes through, front-to-back; and finally an R-clip is inserted into a hole through the pin, at the back of the hanger. 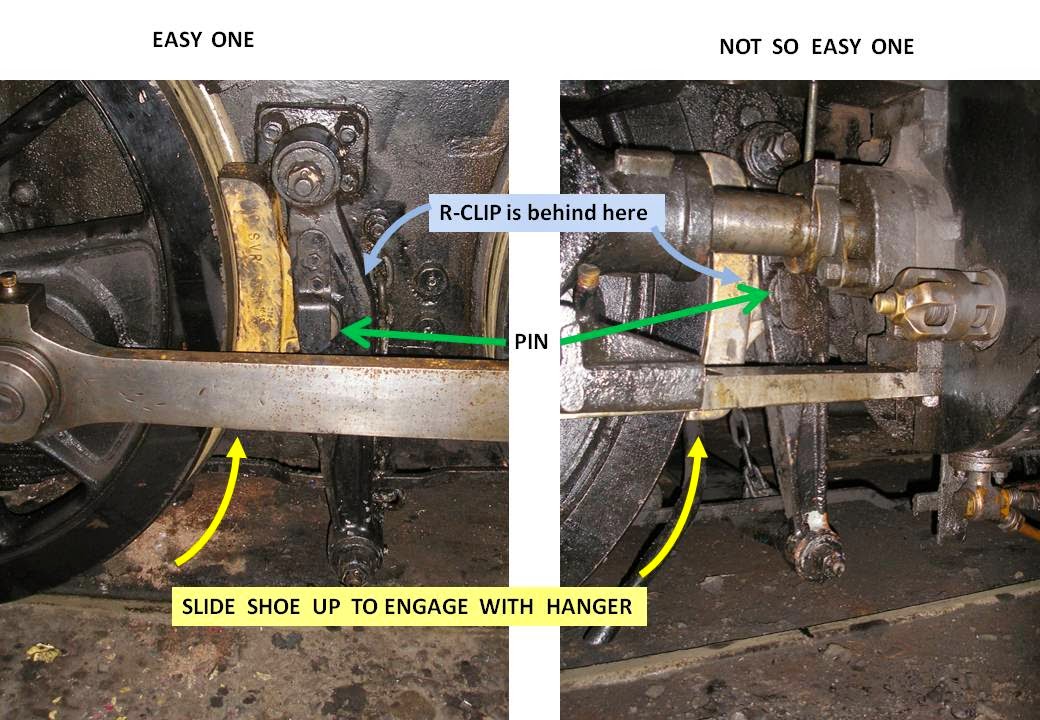 It was a filthy task.  A struggle to get the shoe in place.  A challenge to align the holes.  A veritable test of one's dexterity to fit the R-clip.  To be honest, we'd got all of the old shoes off but only two new ones on by lunchtime!  Then we were given a deadline: Loco Dept wanted to move 2807 at 3.30pm.  We didn't panic.  We supped our tea and munched our sarnies.  Then (mostly) John & I attacked the remaining six brakes with vigour (and experience!).  The fourth one (front right) was particularly difficult, as once the shoe was in place, the pin would not go into its hole - there wasn't enough room; it was fouled by the main cylinder rear gland housing.  After some metaphorical head-scratching (hands too gunged up to actually scratch anything) Clive joined in and suggested removing the shoe and partially inserting the pin before sliding the shoe back up.  Then we faced the puzzle of aligning the holes (that could not be seen with the pin in the hole, obviously).  I was on lever; John on fulcrum & wood block packing exchange; Clive waggling the pin; and Bruce with his finger in the hole, behind the hanger!  We did it - but it was already nearly 3.30.  Steve O backed up with the diseasel shunter, and pushed 2807 back a few yards - this was so the fork-lift could get at the tender, because we had two spare springs on there from when she went to NYMR.  While they were removing the springs, Steve O & I fitted the final shoe in a matter of moments!

John & Bruce tidied away and cleaned the disgustingly filthy spanners.  Steve, Gil & I shunted 2807 round to Road 6 and back into the shed.

I should also thank several people from Loco Dept who, while we were braking, cleaned out the tender, and removed gauge frame and Mason's valve … but I was too busy to see who they were (sorry!).  Clive says it included: Steve O, Sean, Ade S, Jamie, "and even Chris Irving threw in a hand."

The next challenge is to measure the required length of brake rigging.  There is a bottle-screw adjuster at the end, but no adjustment between the brake blocks at all.  So, you've got to measure it and get the holes (in the rods) in the right place!  … and as Bruce pointed out, there's also a need to account for play in the pins that hold sections of rod together! 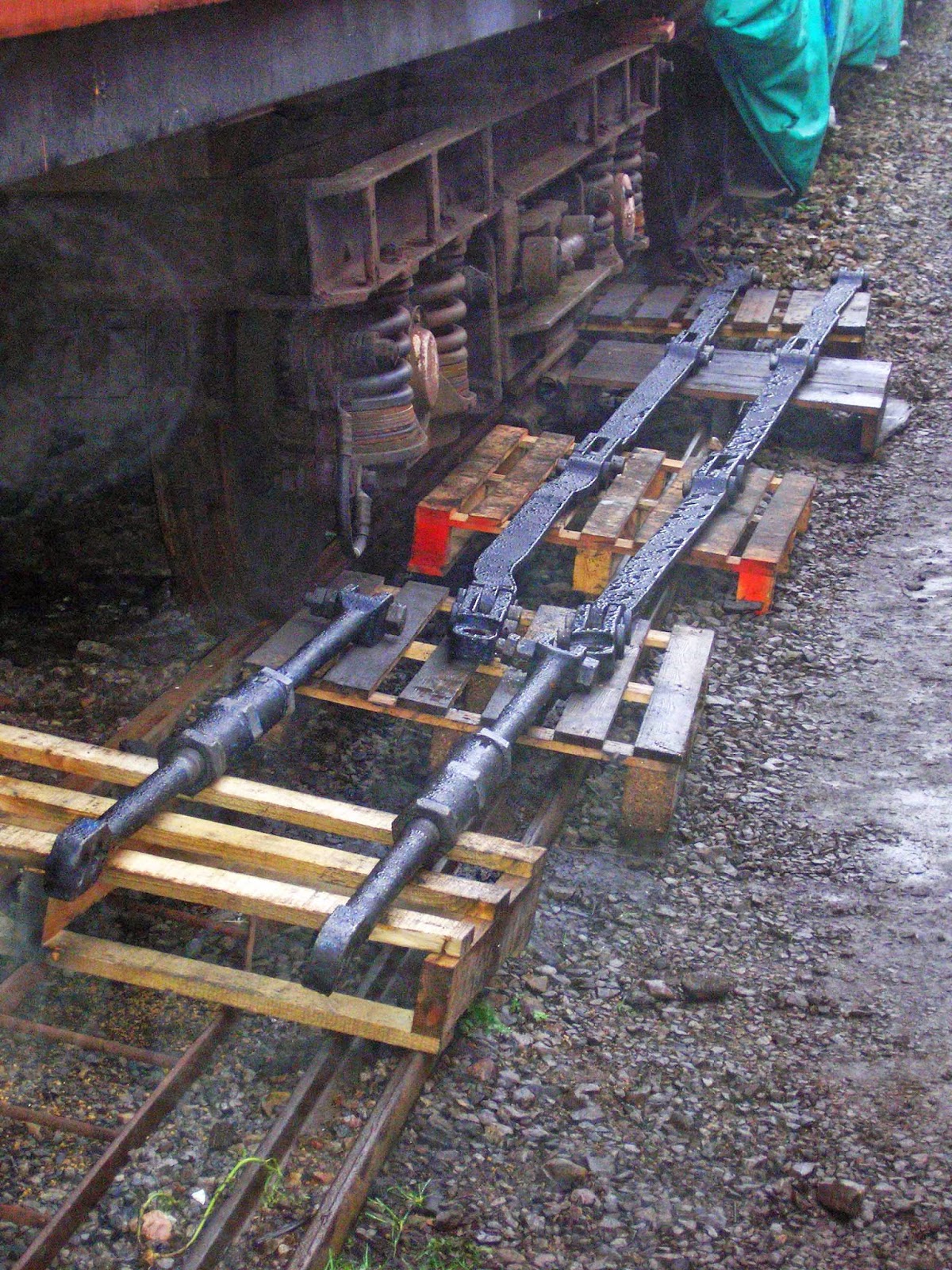 Sunday 4th
Maurice had tipped his food bowl over in his excitement to eat the Hamster Treats!  It landed on top of the rest of the food, and he obviously then pushed it around the floor trying in vain to tip it back again.  Needless to say, the food remained hidden beneath the bowl.  Aaaah!

Monday 5th
I removed the three gauges from the cab and left them with Carpo to be tested.  Then I decided to remove the blow-down valve.  By 2.35 pm, I had given up!  I had disconnected the pipe from the valve and managed to persuade two of the four retaining nuts to come off.  However, the third resisted strongly, and the fourth is difficult to get at.  Pausing from belting no.3 nut, I removed one floor panel (this is how to get at no.4 nut) and tried to remove panel two.  You can only lift it up after removing the three handles from the damper levers … which I did.  Then, one bolt on the floor panel seized, didn't it!  Could I get a spanner on its underside?  [Rhetorical question]  No, because the damper levers are in the way.  Briefly attempted a metal saw on the bolt head, but decided that that was fruitless, and a thin cutter in the angle grinder was the only hope.  Where's the 110 volt supply?  Through the DMU (literally - in one door and out the other).

Tuesday 6th
Arrived at Todders at 09.40 determined to complete the job of removing the blowdown valve.  I attacked the recalcitrant bolt and soon decapitated it and removed the floor plate.  As you can see from the photo, the first two nuts retaining the valve were easily accessible and didn't object strongly to being removed.  However, nut-3 put up one heck of a struggle!  I had to employ a long lever on a stilson and whack it with a mallet.  It took quite a while to persuade it to budge at all, and then I could only turn it half-a-face at a time!  I was having to alternate between the stilson and a ring spanner, to gain purchase.  I adjourned for coffee at 11.15, but then returned with renewed vigour! 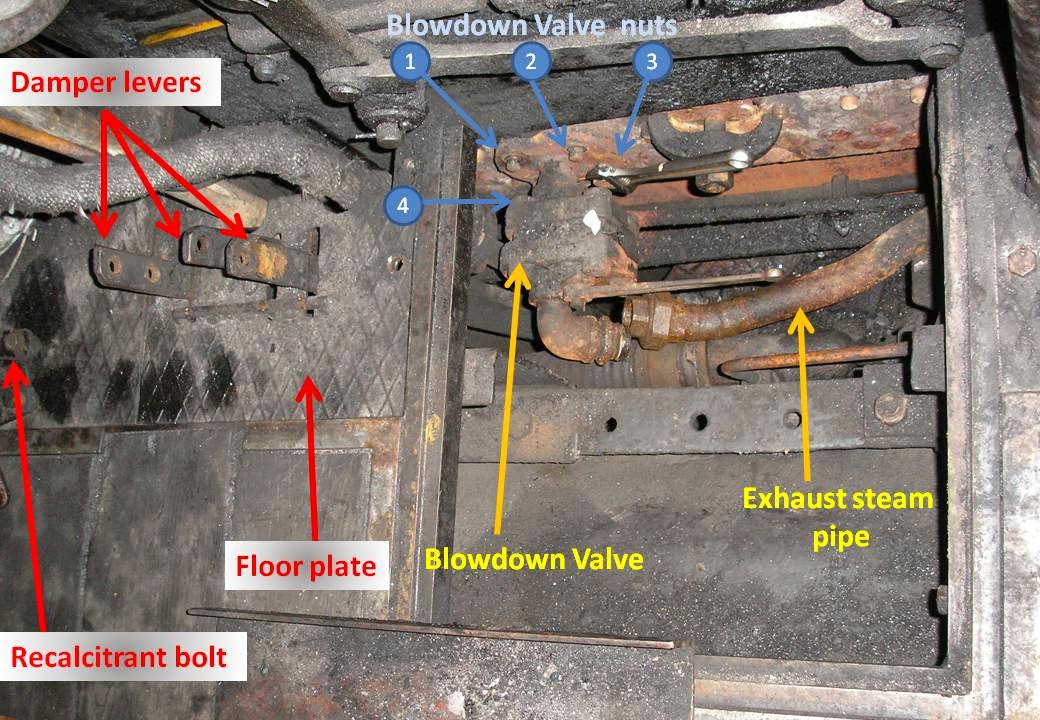 Then getting a spanner on nut-4 was a tease, and turning it was only achieved by resting a long pipe on the end of the spanner and applying science (i.e. a mallet) to it.  By 12 noon these last two nuts had surrendered.  A grand total of two nuts and a bolt had taken about two hours!

Wednesday 7th
In readiness for the boiler wash-out, which is scheduled for Saturday, Gilbert used his strong-arm tactics to ease out all of the boiler plugs and mudhole doors (well, apart from four on the top of the boiler, which he didn't feel safe doing).  Towards the end of the afternoon, he smashed the brick arch to pieces.  I'm not sure what got into him today!

Bruce began in the smokebox, removing the spark arrester.  While in there, he checked the jumper ring on the blast pipe.  A couple of bolts on the retaining clips are loose, but so seized up that he couldn't undo them nor do them up.  So, they're not coming off on their own!  Apart from that, the jumper works fine.  After lunch Bruce clambered on top of the boiler and removed the brass bonnet; then he removed the clack valves and also the safety valves.

I delivered a boot scraper to Sue in Prescott before reaching Todders.  I was then tidying up my previous work - cleaning the threads on the studs & nuts for replacing the blowdown valve; ditto for the floor panels that I'd had to remove.  Yesterday I had removed the bridge from the mudhole door at the side of the blowdown valve in order to get at the latter's nuts.  Today I removed the door - which was only possible after stripping the seal from round its edge.

Later I followed up two issues:
one regarding a catch on the regulator that is designed to hold it slightly open (whereby it opens the W-valve to let lubrication into the cylinders); a driver had reported it to be too stiff. It works absolutely fine, and I can only put the complaint down to driver fatigue.
The front damper lever seems to present a challenge to lift, either to open the damper or to close the damper.  This almost certainly results from the modification recently done to the damper door.  Loco needs to be over a pit to verify the cause before applying a file to the lever.

Loco Dept chaps (Clive, Ben, Pete and Peter G) spread bitumen all over the tender coal space (and tool boxes, and front panels …).  They did offer to slap it on the handbrake and injector water cocks too, but I declined their offer.  Instead, I applied a coat of paint to the water scoop handle, handbrake and water cocks.  Unfortunately, Gilbert wiped it off the water scoop handle shortly afterwards!  I know it was him, because there was a piece of blue latex glove stuck to what paint remained, and only Gilbert uses blue latex gloves!

John G joined us and acted as Gopher to Gil for the day.  Mike came for the afternoon and cleaned out the smokebox to make life more pleasant for Gil to remove the plugs therein; and then cleaned the gunk off the spark arrester ready for it to be painted.

Fred & Ray were working on the siphon van at Winchcombe.