Thursday 15th
Yesterday, the gang asked me to get: some pop-rivets; some marker pens; and barrier cream.  So, I investigated over the internet and planned a strategy: Get them from Halfords.  Well, Halfords didn't have the barrier cream in stock; didn't have the marker pens in stock; and the pop-rivets were not big enough!  I came out with a scraper for Eleanor's car.  Tried Buck & Hickman: they do sell the rivets, but don't keep them in stock.  Tried Toolstation: yes, got the rivets; yes, got the maker pens; no, don't sell barrier cream - try the chemist!  Tried the chemist - no, they don't have barrier cream!  Back to the internet - just bought one tub and got a second free.

In anticipation of not being able to go on Saturday, I went to Todders to deliver the rivets & pens. Thought I'd apply the primer coat to the five chairs that I prepared earlier in the week.  As it was 5.30 by the time I'd finished, I thought Maurice might pop out and say hello - but he didn't.  By the way, just look at the challenge that I'm about to set him …

Saturday 17th
The morning began with the game of 'Hunt Maurice's Food Bowl'.  He appears to have dragged it round the radiator and across the floor towards his door.  Clever little chap - obviously figured it is more sensible to take the whole bowl home rather than run back & forth carrying one piece of food at a time!

It turned out to be a busy day.  While much chatting took place (discussing a multitude of options to achieve a few simple (!) tasks) John T snook out and re-riveted the top corner cladding pieces in the cab.  That's one issue crossed off.

Gil brought a flange, made for the exhaust pipe from the blowdown valve.  We all marvelled at the fact that it had been water-cut. 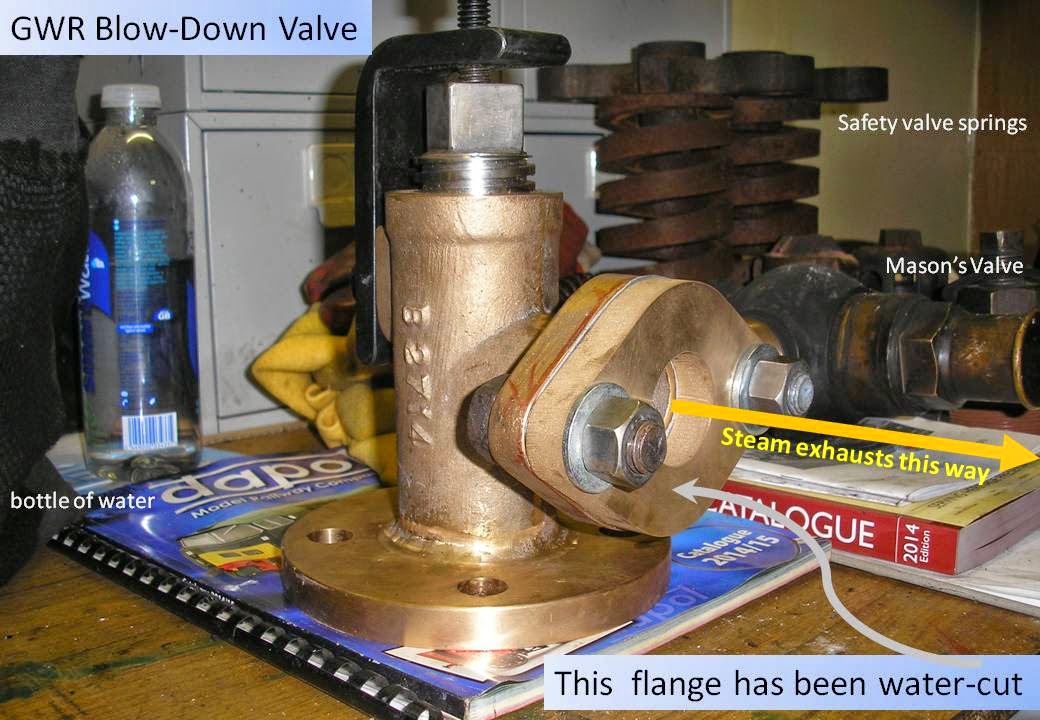 The pressure gauges (steam + heating) had been calibrated, so I was able to refit those in the cab.

Being in the cab, I moved on to solving the problem of the blow-down valve exhaust pipe being directly above (4" above) the lever that connects the sand boxes either side at the rear.  Much measuring ensued, followed by much debate (by most members of the team!).  The final solution is to weld on a by-pass such that the exhaust pipe can go straight down, and the sanding lever is moved forwards by 1.5".

David was tackling the brake rods (wherein the holes need moving),  After an hour and nine welding rods, he decided that this was not the way to do it!  He figured that it is more sensible to bush the existing holes and offset new holes accordingly (I assume the existing holes have to be opened out a tad, to do this).  So, after much further discussion and measurement, Gil has gone away with instructions for his local engineer to fix them!

Most of the day, Bruce was back on top of the boiler, lapping and fitting the safety valves.  I did see him, later, sitting in the smokebox.  I thought he was probably just keeping out of the way, but no - he was measuring the diameter of the boiler tubes!  There are about a dozen of these tubes blocked with ash.  After many days of discussion and various ideas about how to clear them without the operator getting soaked or blasted with grit, we seem to have agreed on using  a 3-segment copper pipe with a cutter on the end, and testing it with a vacuum cleaner first (to suck out loose dirt), and if that doesn't work, then it will have to be an air lance (and blast it out)!

Gil & John T removed the RHS front cylinder cover in order to measure the wear between piston head and cylinder wall.  I gather this was acceptable.  The cover was refitted. 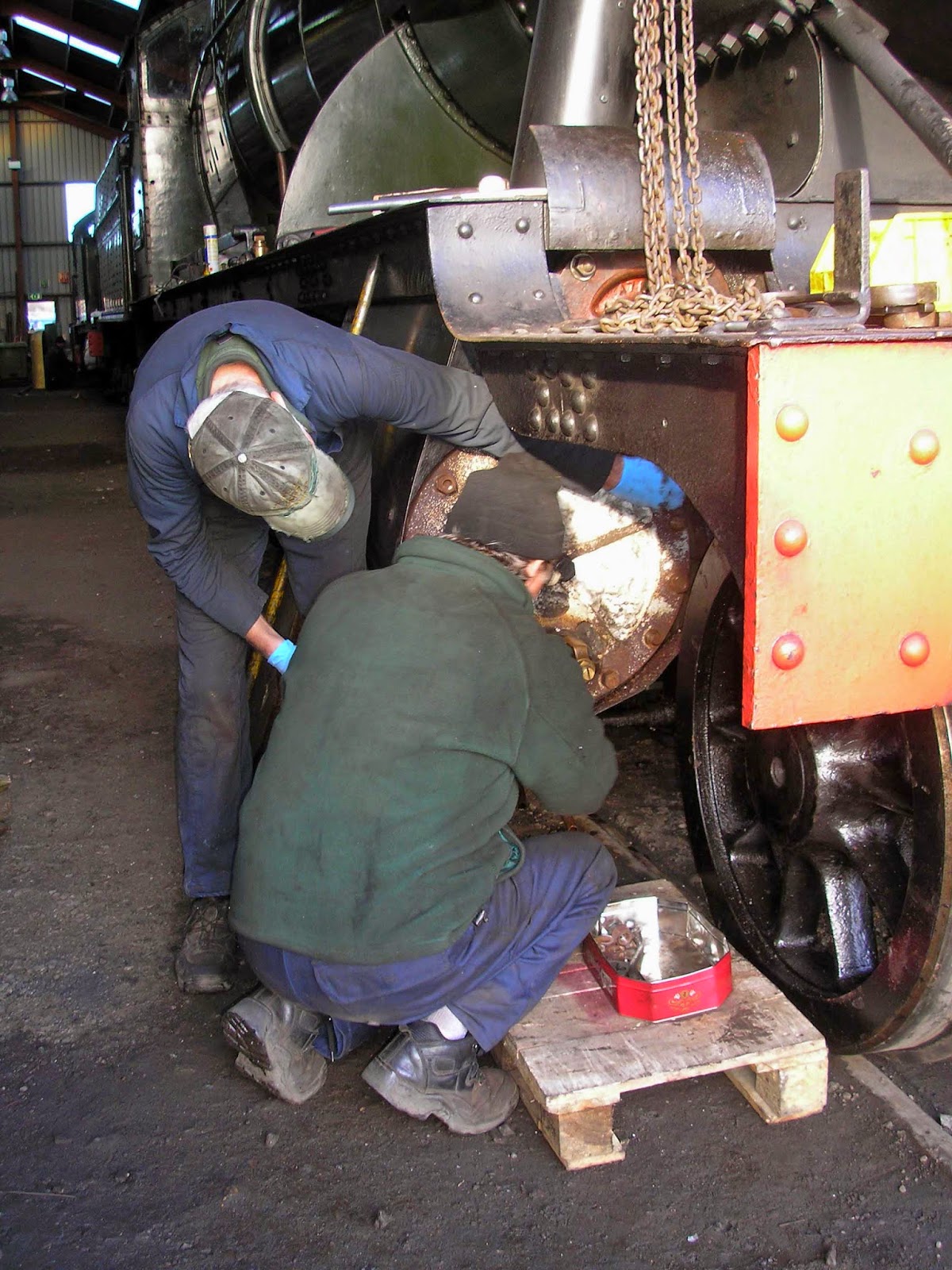 Then Gil wanted to remove the RHS con rod to measure wear in its big end & small end bearing surfaces.  To get the con rod off requires it to be as far back as possible (MY fired up a shunter and moved us forwards a tad); the vacuum pump to be disconnected; the cross-head to be disconnected; and the piston to be manually pushed right to the front of the cylinder!  I assisted Gil & John in doing that.

Being in the mood for welding, David then began to cut metal and form a by-pass in the sanding lever actuation rod that is in the way of the exhaust from the blow-down valve.  Just a "wiggle" to permit a vertical down pipe.  Time ran out before he could finish, though.

By 4.10 pm, Gil had finished measuring his big end, and was quite keen on us taking off all of the coupling rods to measure.  Blow that for a game of soldiers!  Bruce, David & I badgered him into submission, and David & I fitted the con rod back on!

In a spare half-hour, I managed to apply a top coat to the five rail chairs.  Which reminds me, I have received a wonderful book for Christmas from my eldest son:

The Railway by Andrew Dow - and it means the rail-way (i.e. Permanent Way).  Subtitled: British Track Since 1804.  Well worth a read if you are a p-way buff.

Sunday 18th
Maurice had moved his bowl to right outside his door, again!  I'd popped down just to paint the lettering on the five chairs, and prepare ten brush heads (sand + stain).

Monday 19th
Todders is a veritable wild life preserve.  There's a robin that lives much of its time in the loco shed; there's a wagtail chirping away as it flits from wagon roof to wagon roof; and the magpie that frequently pops into P&O's van to see if there is anything shiny that it can lift!

I just went down to finish off the five boot scrapers, as I am being pressed by a customer!

Wednesday 21st
Close by Maurice's door there is an outside door - a hole with the mains electricity cable passing through.  Maurice is obviously noticing a draft (or the cold air), as he has started blocking it with bits of polystyrene!

Two main activities today: con rod & grate.  John T went on a safari hunt for split pins to finish off securing the RHS con rod.  No 6 mm ones to be found anywhere!  John then assisted Gil et al. in removing the LHS con rod, and subsequently fitting back after Gil had measured the bearings. 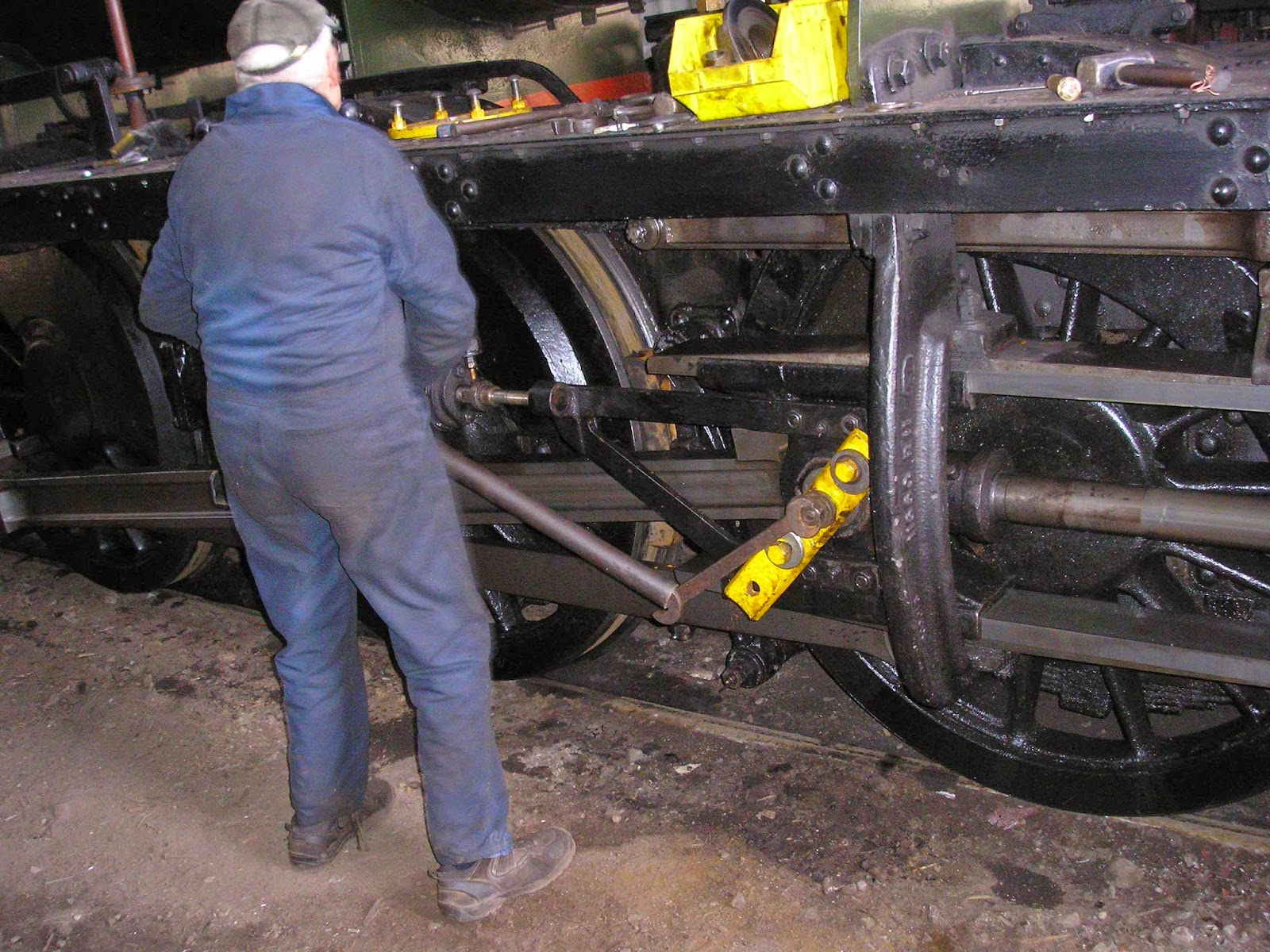 During the morning, John G and I fitted the grate back, and then I was able to peer along tubes to see if they were blocked, while John was in the smokebox with the lamp.  There are 14 that are blocked.  Other have some ash in them. 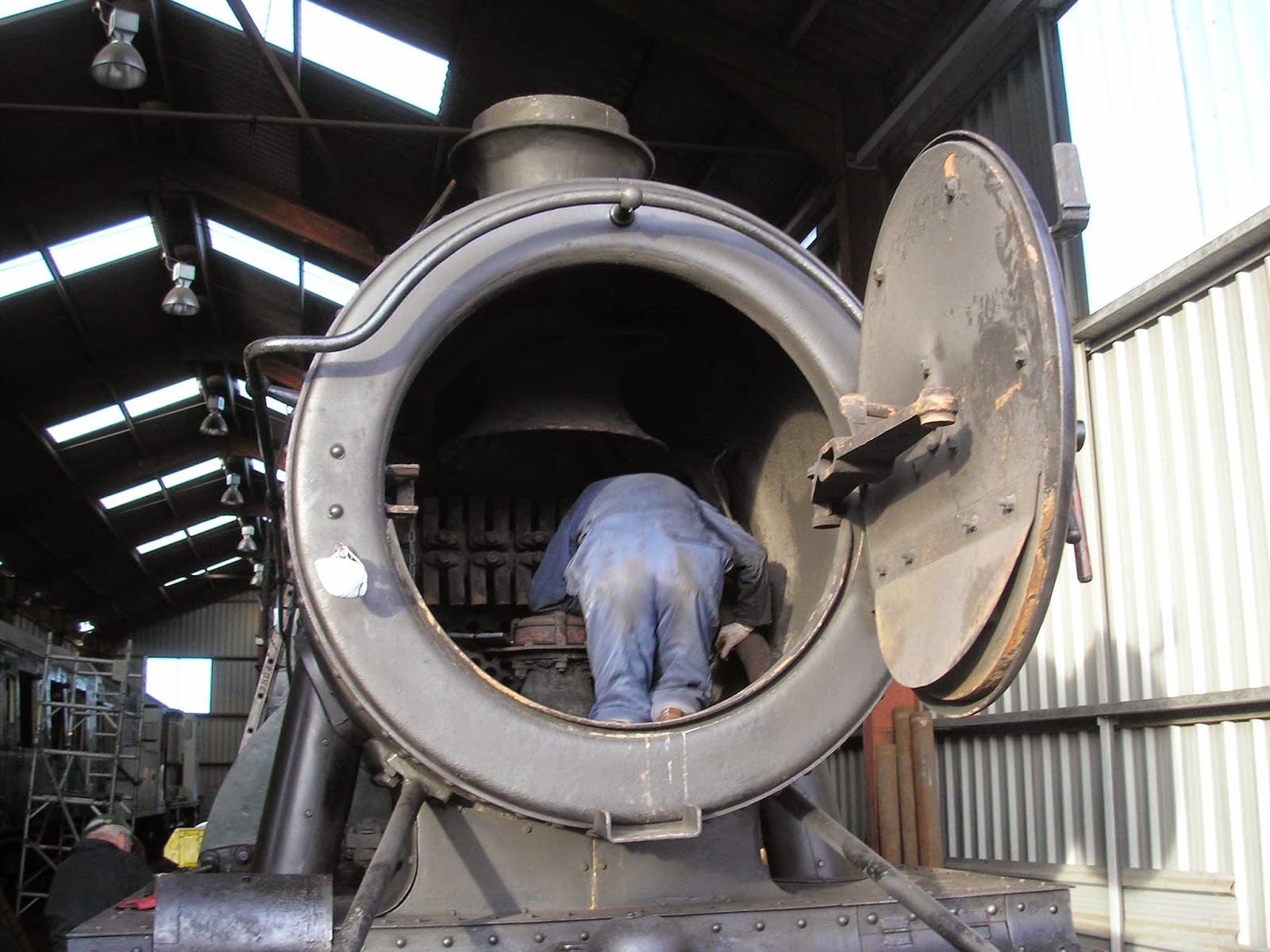 Bruce offered a range of options for getting them unblocked, and we are going for a 22 mm hollow rod with a cutter at one end and a hoover at the other.  Let's see how that works.  Bruce then made the cutter in anticipation.

Gil & Mike tightened up the cylinder cover nuts.  John T and I began cleaning the tender buffer beam, because it could do with a lick of paint.  I was then interrupted by a (welcome) delivery of close to 100 rail chairs from P.Way.

Having got into the swing of it, John then cleaned the Mason's valve while I cleaned the LHS number plate and the warning bell from the cab.

Carpo just managed to sneak in to the TPO for a biscuit before lights out!

On the subject of purchasing various bits and pieces, rivets, barrier cream et al, Why not look at www.cpc.com ? Its a veritable treasure trove of tools, supplies, electricals, safety clothing, gloves etc. etc. They deliver pretty quickly too!