Friday 13th
I managed to squeeze in a couple of hours to paint the buffer beams.  Friday is a good day, as there's hardly anyone about.  I was first there, and only saw 3 other people all morning.

Saturday 14th
Ray O'H is there taking photos of my painting drips for the GWSR Blog!  Later, he came along to borrow the bolts that attach our number plate to the cab side … to use on a photo shoot of 2874 (for which they now have a cabside plate)!

Loco Dept chaps (notably Clive, Ade & Ray) were working on the loco - mostly waxing and polishing the boiler barrel cladding; Clive tackled some peeling paint on the cab roof and applied primer.  He says he'll apply black paint on the roof for us on Wednesday.

Since fitting the new valves, there has been a noticeable shake in the reverser lever in the cab.  David took a look, and decided that the little locking piece that holds the reverser into "gear" is a tad worn and could do with being replaced with one of a tighter fit.  He's going to make a couple and case-harden them.

The regulator valves occupied several people for various parts of the day.  Gil & Bruce were lapping-in the surface of the valve in the smokebox.  David finished off lapping the valve pieces themselves.  Once inspected & approved by Carpo, the guys attempted to fit the valve together.  :-)

John started the day by fitting the Mason's valve (steam heating) in the cab.  For a while he was being General Assistant and cleaning things.  Then he started on rail chairs.  Unfortunately, the needle-gun was not behaving too well (at least 4 needles flew out of it, and it sounded quite poorly).  We did a swop with another gun and got him going again.  By end-of-play John had cleaned four chairs (one of which had been particularly filthy and took ages) and painted six bottoms.

I decided to have a butcher's at the RH rear sandbox, which appeared to permanently dribble sand.  I played with it all morning, taking the whole thing apart and trying to work out how sand could escape.  Finally, I discovered that the mechanism is past its sell-by date.  There's a central rod with a couple of channels in it, this rotates within a pipe that has two slots in it.  When the slots and channels are aligned, sand should trickle out.  But there is so much play between the rod and the pipe, that sand appears to be able to sneak in through the slot, around the rod and out of the channel even when the thing is supposed to be closed!  So, two options: Fabricate new mechanism; or use coarser sand!

Bruce began the day by tightening the blow-down valve (but yet again didn't get as far as working out the route for the exhaust pipe) before getting sucked into the regulator valve.

After lunch, I followed up issue 31 which says that there is excessive clearance between weighshaft* collar and bearing.  You may need a photo to understand that!  I measured the gap between collar and bearing on both side: LHS = 4mm; RHS = 1mm (sorry about using millimetres, but the gap was rather small!).  After looking for further clues and discussing it with Bruce & Gil, I soon found that the LHS collar securing bolt was not exactly tight .. so I tapped the collar outwards and tightened it up.

*According to the Black Book this seems to be called the "Reversing Shaft", but it was recorded in the issues log as a "weighshaft". 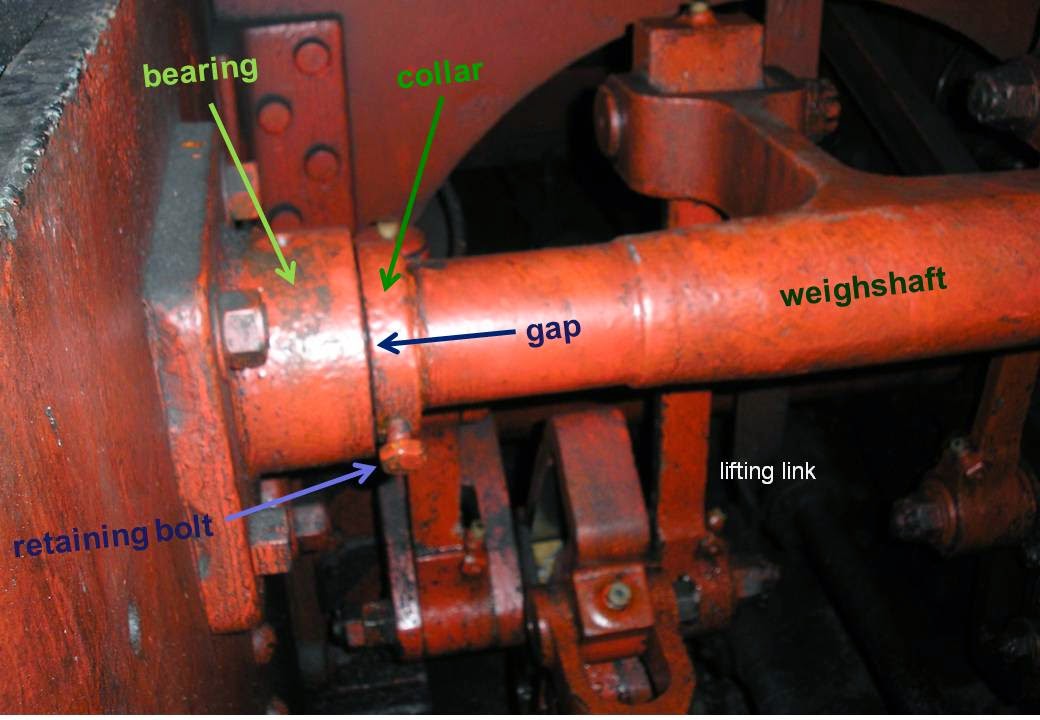 After that, I cleaned a couple of chairs before getting sucked into the veritable black hole of a regulator valve!  The guys had got it all back together, but would the face plate go on? [Rhetorical question]  For a while, I waggled the regulator handle while Gil & David waggled the face plate.  No joy.  Then I waggled the face plate and Gil waggled the regulator.  The problem was to get the boss on the face plate to engage with the regulator rod and six studs all at the same time!  David was struggling to insert a thin bar to raise the regulator rod to align it height-wise, but it would then slide sideways!  Finally, just before 5pm our luck was in - the rod engaged and four studs did too.  But the top ones were still being awkward.  With very careful adjustment of the face plate (so as not to lose the rod!) plus a few belts with the copper mallet, and everything began to go home [John had actually gone home] .  Washer and nuts on ...  Well, there was one minor embarrassment: I sent Bruce for four washers, but then David pointed out that four studs were better off without washers, so we rearranged the washers and had all of the nuts on by the time Bruce came back … with washers! Ooops! 5.15 pm: time to go home. 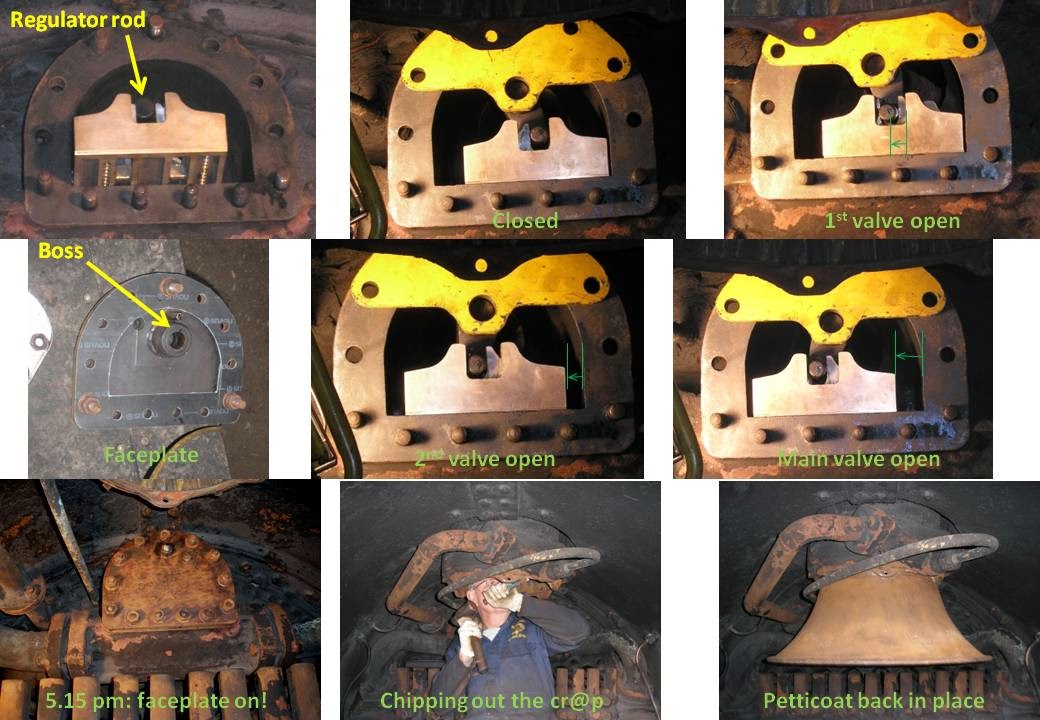 While we were all playing in the smokebox, Maurice had nipped out and carried off the apple core that I'd left him.  In fact, I could hear him munching on it, and so stayed behind, hoping to get a photo of him; but three times he poked his nose out, saw me there, and went back inside again!

Monday 16th
Just popped down to apply a coat of varnish to the bell and number plate … and feed Maurice.

Wednesday 18th
Stuart had come down all the way from Lancashire, just to clean and touch-up the lettering on the tender and the number on the front buffer beam. 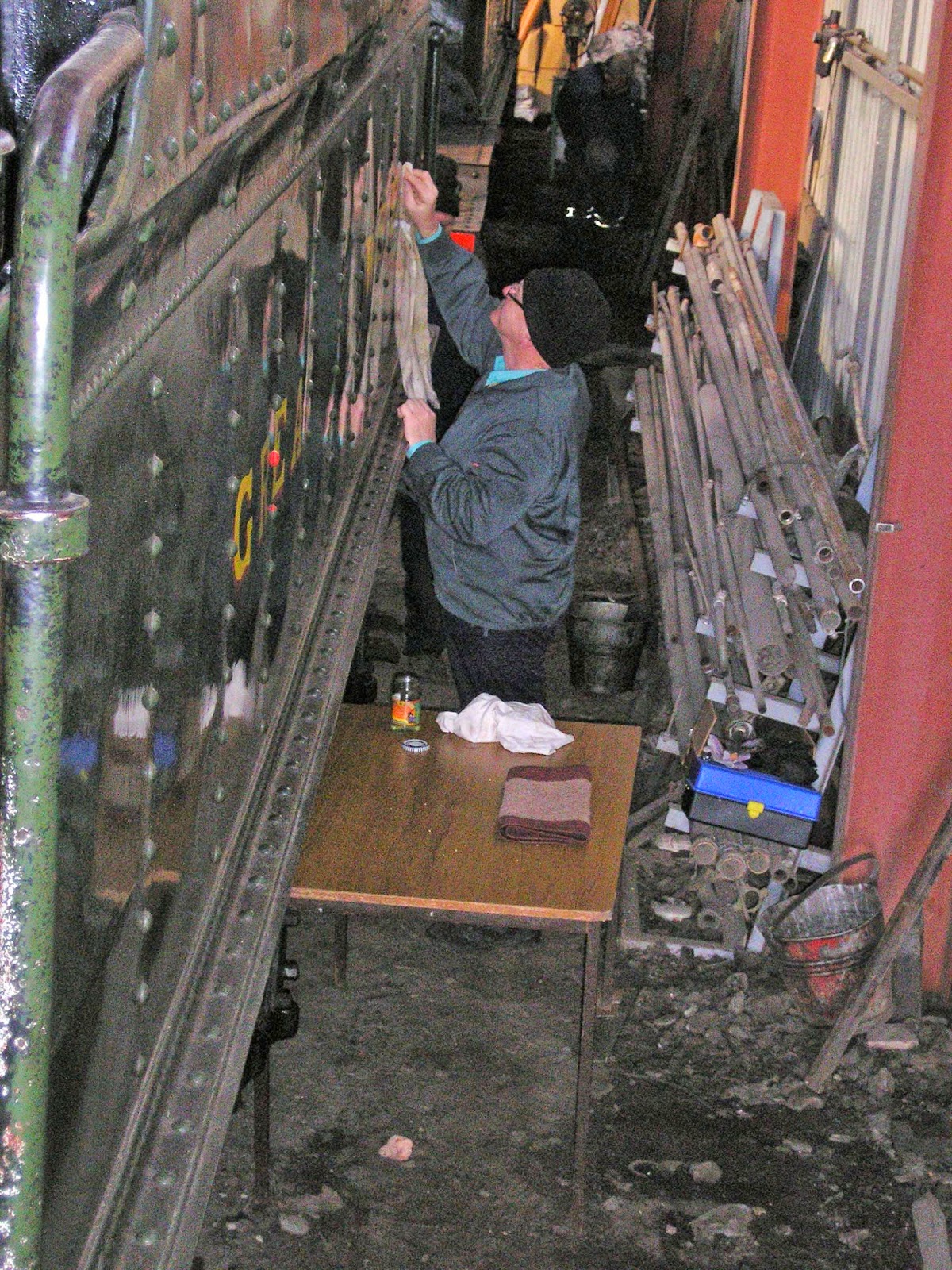 David took another look at the reverser lever catch, to measure the little plunger ready to make new one(s).  Most of the day, however, he was welding in bushes on the brake rods.  There are four more to go!  Towards the end of the day he helped with the petticoat, which was refusing to go home …

… Mike had given the petticoat a clean with chisel and wire brush.  However, when Gil, Bruce & I attempted to slide it back onto the bottom of the blower ring (beneath the chimney) we could not get the bolts to fit through the securing holes.  The holes would not line up!  What we discovered was that there was so much grot on the blower ring's bottom, that we had to chisel it off.  It shone as though it was metal, but it was just fooling us!  "Fool's steel", I suppose.  Anyway, Bruce & I tackled the ring and David took the petticoat off and ground off an obstinate piece on that, that Mike had been unable to get off.

As a certain person had bought the wrong sized bolts, we could only temporarily fit the petticoat back in place - using three bolts that do fit.  After cleaning up the surfaces we could only find two of these bolts … we searched all over inside the smokebox … on the running board below the smokebox … guess where I found it …. 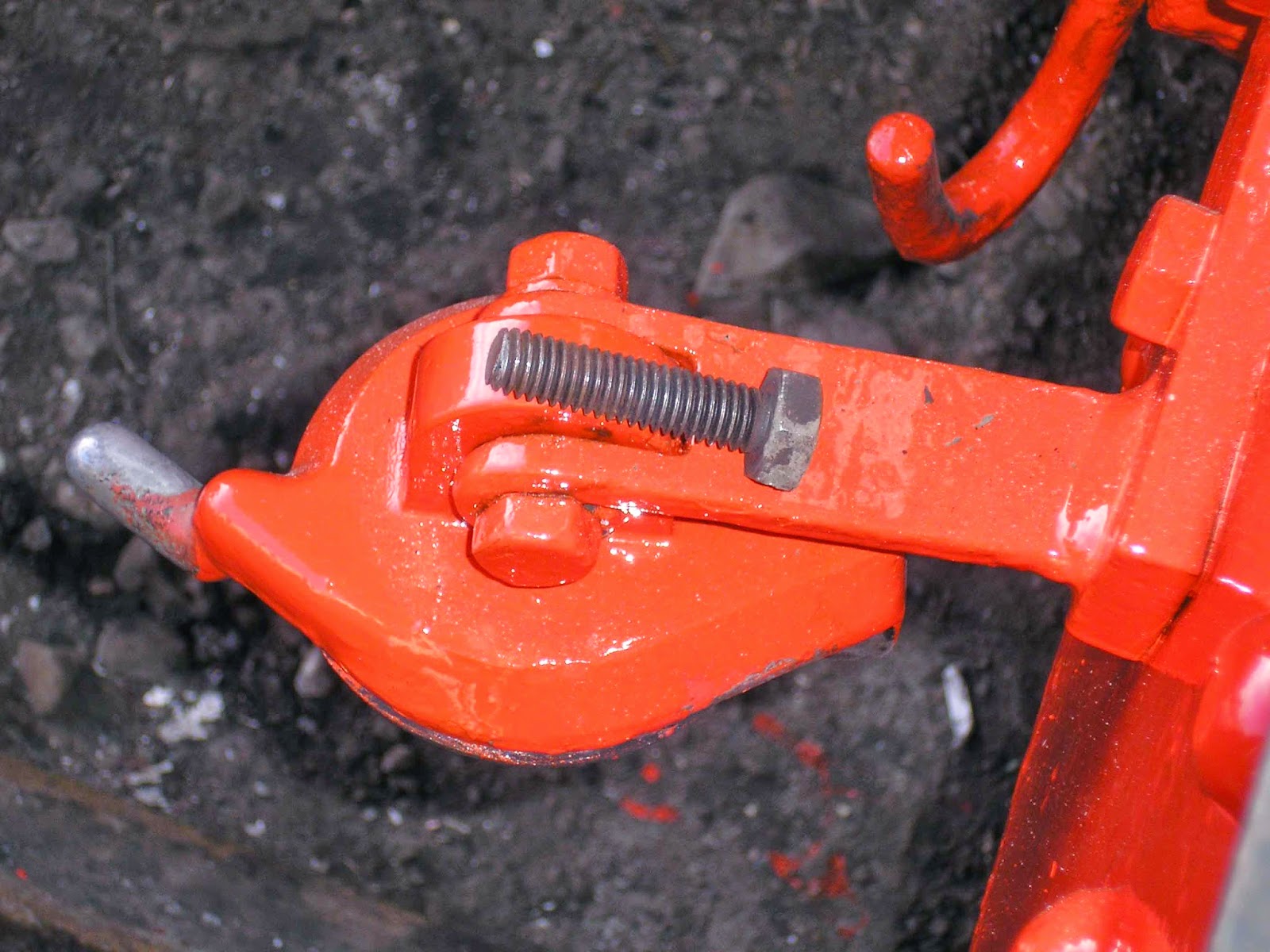 Apart from time spent in the smokebox, Gil also gave the cab roof some attention.  There were a few spots where rust had regained control, so he tidied these up and applied a primer coat.  Having practiced at painting, he then applied the same black to the brake rods that David had been working on.

John G pressed on with the ferrules in the cab - fitting the last one and then painting some of them.  As they have been adjusted to fit each position, they'll need carefully marking as to which hole they fit.  Once you get painting, you can't stop … and John painted the bottle screw sections of the brake rigging.  Then he painted the foot pads on top of the buffers in black! 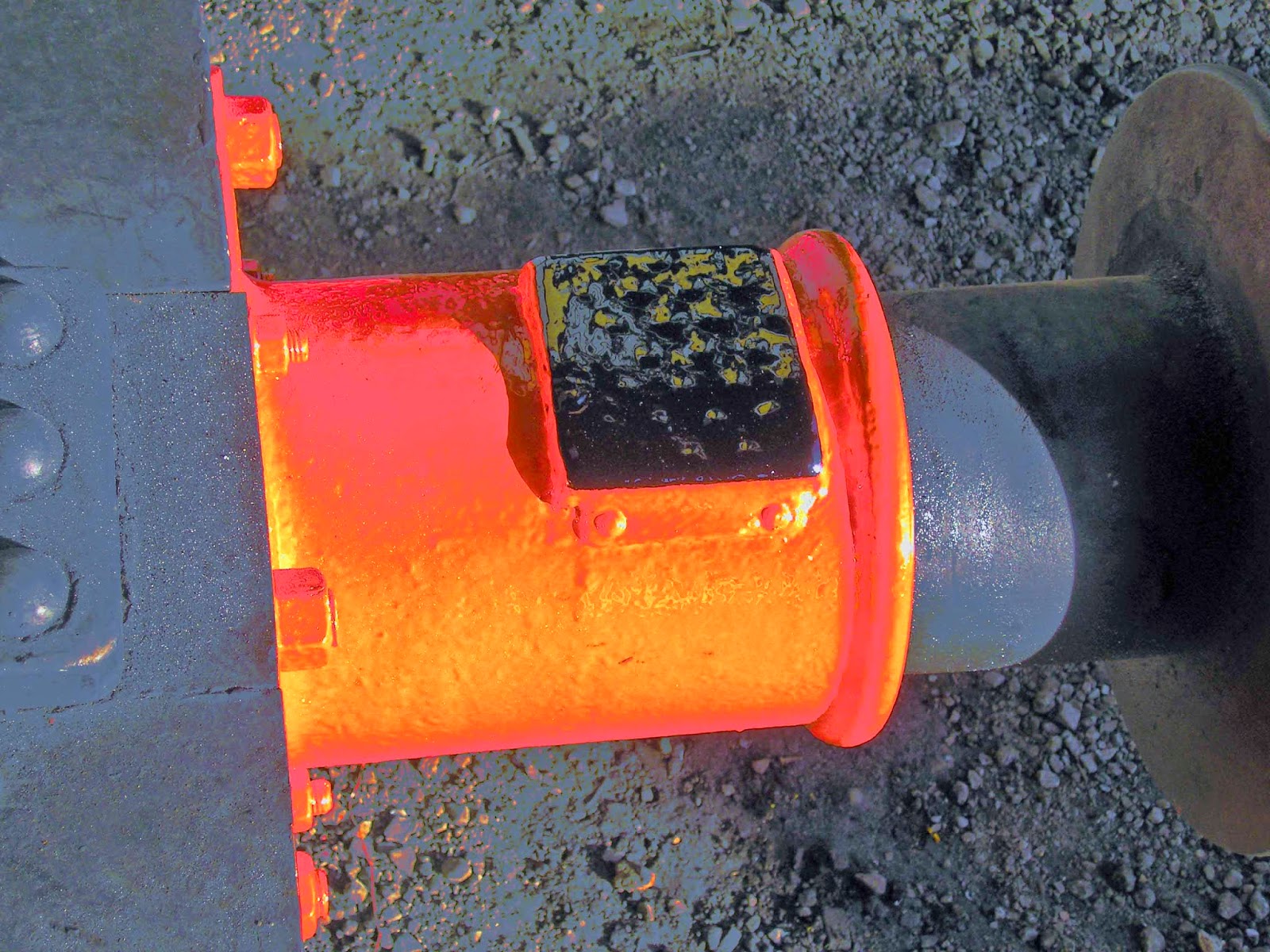 I cleaned the injectors, and Bruce decided that they need their clack valves lapping, so they didn't get fitted.  I also fitted the newly cleaned, painted and varnished LHS cab number plate, ably assisted by John (who happened to be in the cab playing with his ferrules at the time).

On Saturday we aim to be over the pit, so that we can finish off a few jobs and make a start on fitting the brake rigging.