Saturday 7th
Maurice, having ably mastered the game of 'hide the food bowl' (i.e. neither I, Bruce or John could find it last Wednesday), is ready for his next challenge on the route to the 2016 Mouse Olympics.  I stumbled upon the food bowl today, hidden underneath the pallets upon which we paint the rail chairs!  So, this week's challenge is to get the food bowl out of the  steel "pen" that I have now put down to surround the food and water bowls.  Will he use brute force, or with there be a ramp with six pencils used as rollers?  We shall see …

Meanwhile, Gilbert has hatched a cunning plan: Anyone who records an issue against 2807 has to come and fix it themselves!  Accordingly, Andy W spent the day in the smokebox, removing the regulator valve.  Actually, I suspect he was just showing off: He managed to get 13 nuts & bolts out in a day, dramatically beating our record of six last Wednesday!

Gil was assisting Andy.  He made a new gasket for the face plate, and cleaned the threads on the bolts and studs ready for re-assembly.

Bruce was going to fashion a (thick) wire to plan a route for the blow-down valve's exhaust pipe.  He only got as far as finding and straightening a length of suitable wire before deciding that the new regulator valve needed to be lapped-in before it could be fitted, and this was a higher priority.  So, he spent all afternoon carefully lapping the two plates of the valve.

John began with his usual role of gopher, but then he and I decided that we were surplus to requirement and could therefore restart the boot-scraper production line.  John nobly cut off stubborn bolts and congealed grease, while I manned the needle gun and wire brush.  Early on, the needle gun kept freezing up - as the compressed air expanded it cooled, and the ambient temperature being circa 0.5 degrees Celsius (33 in old money) the vapour in the air froze!  I took time out at that point to fit a new element in our heater.  Bruce (working at the bench doing his lapping) was most appreciative.  Also, Andy presented me with the newly-removed regulator valve face plate with a request to wire-brush all of the old gasket off.

By end of day, we all felt we'd achieved something … eight black bottoms (on rail chairs) in my case.

Sunday 8th
I called in at Todders, and to my surprise Bruce was already there!  He had figured that in order to lap-in the main regulator valve on Wednesday, he ought to make sure the new valve part had a perfectly flat bottom.  It hadn't (of course) and so Bruce was lapping its bottom in anticipation.

I took the opportunity to replace needles in the needle-gun, since it had lost about 7 of the 19 that it began life with.

Monday 9th
I suddenly remembered that I have an order for a 1900 MR boot scraper - and I couldn't remember cleaning one on Saturday.  So, I went down to check … we hadn't.  So, I tested the needle gun and wire brush on the MR chair, and painted its bottom.  Also undercoated the top of a BR chair black, as we have an order for a black BR boot scraper.

Tuesday 10th
I had to go and apply black enamel to the BR boot scraper for collection on Wednesday!

Wednesday 11th
Bruce was lapping all day.  It's a tight hole inside the regulator box in the smokebox, and Bruce had to convert a bolt into a knob to fit on the top of the lapping plate to be able to manipulate it.  There is not much room for movement, so it was a slow process.  By end of day, the worst was probably done … need to use fine paste for the next stage on Saturday.

Carpo had supplied new ferrules to replace those that he "borrowed" from us for his 42xx last year.  John G then played with them to make them fit into the existing holes in our backhead cladding.  In the photo, you can see two of the new (shiny!) ferrules; you can also see how the regulator handle was released and rotated to get the actuator out of the way at the other end for Bruce to do his lapping. 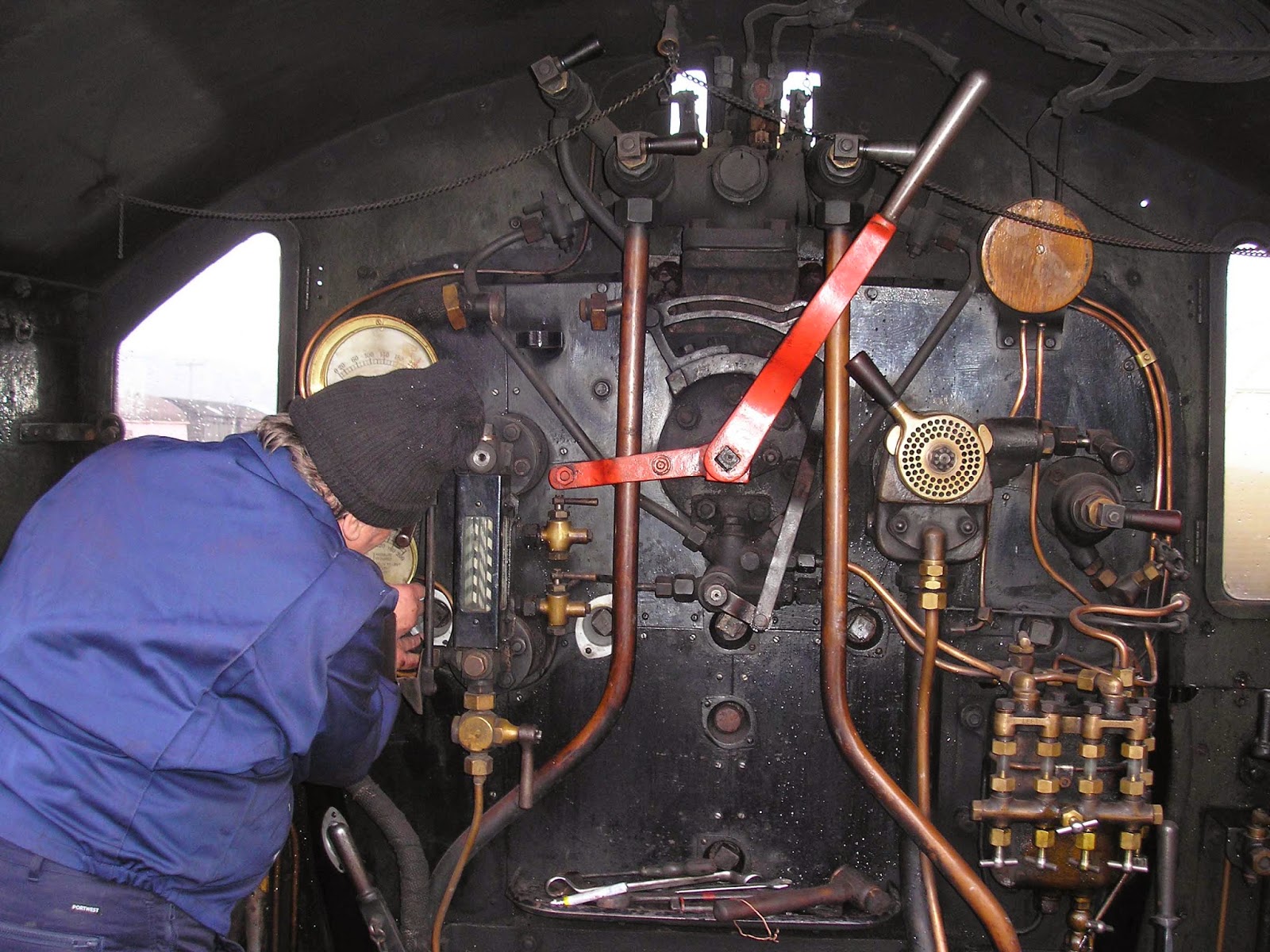 Clive & Ade [Loco Dept] were cleaning the boiler cladding (causing the occasional shower in the cab, apparently).  They will apply wax next time.

When asked what he'd been doing, Gil replied: "General assistance."  He did release the regulator handle, though!

Tim P [Loco Dept] popped into the TPO to take a look at the new regulator valve.  This is something that most people never see, so it is of interest when one is exposed.  John P [Loco Dept] took part in the 'cram as many people as possible in the smokebox' record attempt, similarly to see how it all works.

I spent the day in the TPO on boot scrapers: picked out the lettering on the black one (paint was almost dry when John M collected it) and fitted the brush. Then I applied crimson lake to two ordered chairs; undercoated 6 in green; plus 9 brushes sanded and stained.

Stu's coming down from Lancashire next week to touch up the lettering on the tender and the numbers on the front buffer beam.

BTW 2807 is not scheduled to operate the race trains in March.