"… on the second trip out of Cheltenham Racecourse on today's F&D course the crew failed to fully release the tender handbrake before departure. They did not realise their mistake until approaching the foot crossing at Bishop Cleeve when, having shut off, the rate of deceleration indicated the problem."

Carpo carried out a detailed examination of the tender wheelset and there appears to be no major problem:

" I am relieved to be able to tell you that no major flat spot developed and that there is no evidence of the tyres having shifted on their wheels."

However, some damage was caused to the tyres on the rear wheels.  He put 2807 out on Saturday, and will examine the tyres again at the end of the day. 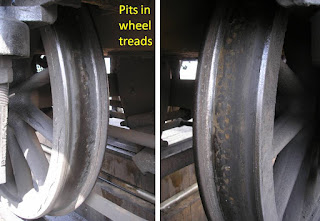 Saturday 27th
I popped down first thing and examined the rear tender wheels.  They were quite noticeably scoured, especially the RHS.  Furthermore, when 2807 left the yard, there was a very audible thump-thump-thump.  Methinks there is a flat!

Sunday 28th
Sitting on Winchcombe station as 2807 pulled (and then out), I could not hear any thumping sounds at all.  Later, I spoke with Jon W (driving) who said that the tender flat had more or less rounded itself.  It was only noticeable at speed.  Similarly, there is an occasional "thunk" from the rods, but not a consistent knocking.

New issues raised:
39 [JC]: Excessive side play in all gradient pins.  Serviceable until all rods overhauled. {I have to admit that I don't know what a "gradient pin" is!}

43 [IW]: Lub{ricator} shut off on lubricator not working. Operates in mid position.

Anyway, 2807 was standing still all day, so we decided to tackle some of the issues on the list:

18: Cannot always engage full forward gear.  This is first on the list, but was almost last of the day!  We had discovered that the central support bracket was the cause, preventing the operating rod from moving fully forward.  So, Gil & I removed the bracket, and then worked out where it ought to be when the reverser is full forward … about 1/4" further forward!  What were our options?  Drill out the holes (they'd become oval, of course) to suit; Fit skinny bolts and hope no one notices; file down the end of the  slot in the rod; or simply remove the roller in the bracket, thereby yielding a good 1/4" extra space.  We played with the reverser while watching the roller, and it didn't seem to be doing a lot of good, so it is now deposited in the box in our TPO which is marked "A Safe Place".  No probs now in engaging full forward!

27: Pony truck pivot pin very loose; & 32: Pony truck axle hot.
Gil & Bruce spent a lot of time watching the pony as JC pulled us to & fro with his diesel shunter.  I'm not sure if that helped, but the two of them then removed the pivot pin and measured its diameters.  Either it is oval or the hole it goes into is, or maybe both are!  It does allow sideways play.  Also, Bruce recalled that when we weighed the loco, one side appeared to be 5 tons heavier than the other.  Could that cause the pony to veer sideways? If so, could that cause friction (e.g. on the flange) and heat up the axle?  The only decision was to carry on to end of season and then bore out the bush and make a new pin to suit. 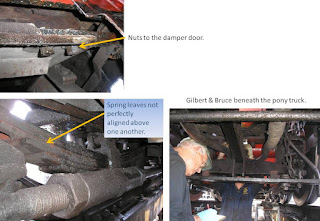 34: Pin through reverser lever handle had dropped out {and been replace with a nut & bolt}.  John G and I played with this.  The pin came flush with the handle body - nothing to hold it in place, seemingly!  So, we decided to make a new pin, 3/8" longer and with a split-pin hole through it!  John asked Rod (in the workshop) who machined one for us by end of day.  I checked the fit (and adjusted the handle's hole to suit the pin!).  It still needs the split-pin hole drilling, and then Gil will get it hardened.

36: Rivets in both die blocks loose.  Bruce checked them both and whilst we knew those in the LHS are loose, those in the RHS are not!  We only had that remade over winter.  There is some play between the die block and the slot that it runs in, but the rivets are fine!

39: Excessive play in gradient pins.  These pins join the sections of the coupling rods together.  Gil confirmed that there is play in them, but no action proposed until winter maintenance.

40: Flat on rear tender wheelset.  While JC was shunting Bruce up & down, I watched & listened to the tender wheel.  There was no sound of a flat at this speed.  However, the pitting in the tyre surface was noticeable.  Speaking with Carpo, the decision is to run the tender to end of season and then assess the tyre wear and decide what action is appropriate.

41: Front damper doo linkage loose.  Actually, UI noticed it was loose during winter maintenance.  However, the nuts are "welded" onto the bolts and I could not tighten them.  Today, Bruce and I had another go.  We could not budge them.  So, yes they are loose, but there is no chance of them coming off!  We could cut them off and replace them, but I argued (successfully) that in doing so we would be fitting nuts & bolts that could come loose!  :-)  No action currently proposed.

42: Left trailing driver spring leaves out of alignment.  Gil & I inspected the spring, and we agree that the leaves are not neatly stacked - they could have been assembled better.  But there is no sign of a broken leaf nor the central pin being broken.  Bashing the leaves just to get them perfectly aligned didn't seem to be a good idea - what if we broke one in doing so?  No action proposed.

43: [Hydrostatic] Lubricator shut-off not working; operates in mid position.  This is puzzling.  The shut-off is a simple screw-it-shut device.  There is a 3-position lever on top of the lubricator that opens one or other of the condensing coils (on the cab ceiling).  This must be what was meant.  I tightened it.  Don't know if it will do any good!

44: Lubricator sight glass leaking oil.  John G and I removed the offending sight glass regulator valve, and could see that the packing in it was in a poor state.  John took it away, thoroughly cleaned the valve and discovered a brass ring inside.  This is supposed to compress the packing.  Gil found the right sort of packing and John wrapped some round the thread and then reassembled it.  Let's hope it works - you can't tell until in steam!

Apart from these, John also fitted the ferrules in the cab (which he's been wanting to do ever since the wash-out, but 2807 didn't stand still long enough); he also painted the rail chairs in the boot scraper production line; oh, and he was brakeman during the rolling inspection. 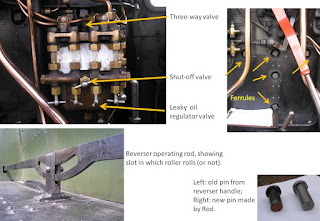 Gil tightened up the clips on the steam heat hose.  A wisp of steam had been seen emanating from the loco end of the hose twixt loco & tender. 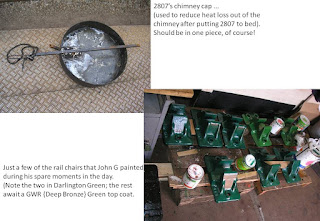 The roster now has 2807 having a rest, and then in service on Friday 10th through to Sunday 12th; and then a BIG rest until 31st July.