Friday 7th
I had to attend Todders to give lighting-up instructions to a new chap.  2807 was out in the yard, but it transpired that 4270 was due to be in service on Saturday … and it was in the shed!  So, we were able to "play trains" and shunt 2807 out of the way; pull 4270 out of the shed, couple up to 2807 again and push 2807 into the shed.  In doing all of this, I could hear a "clunk" each time the left-hand coupling rods neared bottom centre.  I couldn't tell exactly where the noise was coming from.

Saturday 8th
Having had Carpo's tool sharpened, David, assisted by John T, was able to finish cutting the blower valve's bottom.  It was so sharp, that David cut more in 5 minutes than he & I managed in a whole day previously!  He was so proud of the shiny smooth finish, that he insisted that I took a photo! 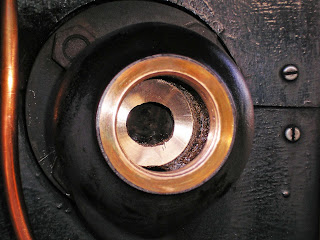 I tackled issue 50 (RH rear cylinder relief valve was "popping" as the loco pulled away from stationary).  All I could do was apply a quarter-turn and hope it was enough.  You can only tell when in steam and pulling away under load.

Then I turned to issue 48 (LH injector steam valve needs repacking).  I hadn't actually packed anything before, so I was time that I learned how.  There was just one turn of 3/16" packing in there, and it gets compressed to the point of having to be dug out with a pointed needle.  The packing in there was silver coloured but the one I was about to put in was white, so I checked that this was OK.  It was.  Again, you can only tell if the packing is squeezed enough when the valve is in use, so here's hoping!

John moved in to helping Gil carry out an A Exam on the loco.  This consists of going round checking a list of items.  I pointed out that when "playing trains" on Friday, there was a slight knock from the LH intermediate driving wheel area, so Gil took a look during the exam.  Nuts clamping the horn guides to the frames were not fully tight on the said axle and also on the RH driving wheel.  So, Gil & John applied spanner and persuader to get them really tight. 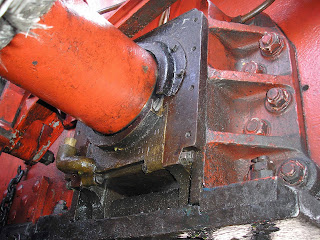 David investigated issues 47 (leak near manifold, could be Y-splitter) and 45 (pin-hole in condensing coil).  Since the two are connected (the Y-splitter routes steam to both of the two concentric coils) it is possible that the visible steam escaping could be from either.  David thinks that there is just one problem, and it could simply be the connection itself between copper pipe and Y-splitter. 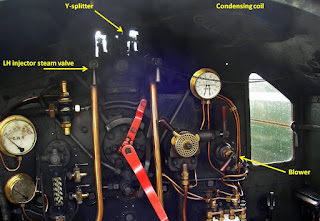 John & I spent the rest of the afternoon playing with rail chairs.  John tidied up the heap recently delivered by P-Way, then cut bolts off a number of them.  I needle-gunned and wire-brushed three chairs (one being Midland Railway 1900).

Wednesday 12th
We had pretty much decided that there are no outstanding issues that we could tackle confidently within the day, and 2807 may be in service on Saturday.  So, John G set to with the paint brush and painted four tops and four bottoms.  Dixie and I cleaned 4 rail chairs (i.e. John's 4 bottoms) during the morning and then Dixie went to Winchcombe to fix some 240V sockets in the siphon van.

Keith (not Graham) was machining the steam heat connection, so that was not ready to be fitted.  Holding it fast to machine it is the problem - it's such an awkward shape.  Bruce noticed the front steam heating hose (AKA "bag") is flared out at the ends.  Typical of 2807 - different both ends (often different both sides!).

Bruce & Gilbert spent much of the morning poring over (or under) the pony truck, trying to figure out how best to remove the truck and also see if there are any clues as to why the left-hand pony wheel is wearing its flange.  The fact that Gil's weighing had the right-hand pony wheel carrying half-a-ton more than the left is illogical.  The weight of the loco bears down centrally on the pony truck pivot.  There should not be a difference between the weight on each side.  In fact, Bruce calculated that for there are really be 1/2 ton difference, the central pivot would have to be over an inch-and-a-half off-centre (which it clearly isn't!).  The holes (there are two vertically aligned) for the pivot pin are somewhat oval, and B&G were figuring out how to machine them true.  Bruce suggested, too, that we might turn the pony axle round and see if that affects the wear - not something we could do today!

During the afternoon, I continued cleaning a further four chairs and Bruce dug out some gasket material in readiness for the steam heating connection (which should be ready next week).

Oh, B&G also measured the expansion links to see how much life there might be left in them, as we have an opportunity to buy a set.

It's not clear if 2807 will be in service this weekend - Carpo had planned with us that she would be in service on Saturday & Sunday, but the roster sheet says "TBC". So, I don't know.