Thursday 27th
I popped over to Tewkesbury to buy some more black gloss Deproma paint.  Back at Toddington, 2807 was sat on the bay platform road with a wisp of grey smoke drifting from her chimney.  Three new springs appear to have been delivered; 4270 was still sitting on its jacks in the yard.  I believe that two of its springs had broken last weekend.

Sunday 30th
Took the family for a train ride because it was raining.  It happened to be 2807.  The start pulling away from each station was so smooth that I just had to go and compliment the driver!  Honestly, you didn't realise that you'd started to move.  From Ray's GWSR blog, here's the story of Sunday:

"the bank holiday weekend Sunday was blessed with a typical bank holiday weather forecast, unremitting rain.  For a change, I was rostered for 4270 (my last 5 turns have been on 5542, so I was looking forward to something different).  Added to that, 4270 has a nice enclosed cab like 5542, we would laugh in the face of the storm that was to come.  On the Saturday I learned that 4270 had been failed with a broken spring and would be out of action until a new one had been sourced.  My steed for the Sunday would now be 2807.  For those of you who may be unfamiliar with our locomotives, just think of 5542 and 4270 as being like your average family car, whereas 2807 is more like a convertible that has lost its windscreen and roof, at least when running tender first.  Once that analogy has planted itself in your mind, take a moment to reflect upon which one you would prefer under the circumstances.  I feared that I would no longer be laughing in the face of the storm that was to come.   I packed an old trench coat into the boot of the car before setting off and hoped for the best.  As I was down for train 2 on the red timetable, I arrived an hour or so after Andy who had been rostered on 5542 on train 1.  No sooner had I emerged from my car, than I was met by a fluent stream of Anglo Saxon which when translated amounted to the fact that 5542 was in a bad way and that Andy would be requisitioning 2807 from me and running that on train one instead.  At that moment, my driver, Steve, arrived and after a bit more translation, we established that the grate on 5542 had partially collapsed and needed some remedial work before it could be used.  This was of course a challenge, could Steve succeed where Andy had not.  Well it turned out that he could, and after a complete rebuild of the grate we were good to go.". 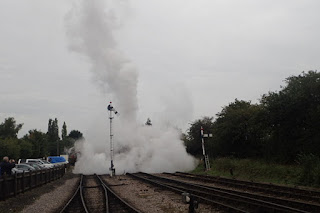 Wednesday 2nd Sept
Gil, Fred, Ray & Bill were at Winchcombe working on the siphon van.  That is to say, I can vouch for them being there … eating their lunches!  I had an appointment in Cheltenham so couldn't get to the railway before 1pm.

Bruce said that Gil had come to Todders first thing with some nuts, bolts and a plate off the siphon.  He came to refurbish them.  Then he buzzed off back to Winchcombe.

At Todders, John G had painted 10 chairs in the production line during the morning, then ran out of things to do.

Bruce was still there when I arrived.  He said that last Saturday, Carriage & Wagon needed to do a steam heat test on one of the coaches, and as 2807 was around …. Ah! Steam heat … we hadn't fitted the valve & pipe to the tender yet.  With no on/off valve at the tender end, steam would have gushed out of the open-ended pipe!  So, Gil apparently temporarily fitted it quickly.  Today, Bruce finished off the task.  In particular, the locknuts on the on/off valve assembly were too thick, and hence blocked the holes for the split pins (= belt & braces approach).  So, Bruce skimmed the nuts down and fitted pins, too.  He bemoaned the fact that it was a long walk from the yard down to the loco, which was parked on the bay track at the station. 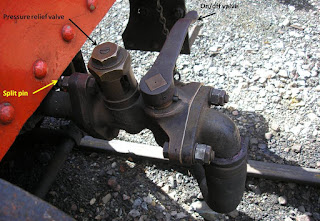 Thursday 3rd
I popped down to do lettering on the chairs, and checked the issues log for 2807 - no new issues (maybe they've run out of paper at last?).  I also checked the loco roster - 2807 is now to be in service this weekend. 4270 is still sitting on its jacks.  Apparently, the new springs need a bit of work doing on them to persuade them to fit.