Friday 11th
John P [Fireman} reported:
"Bruce asked me to carry out some checks on 2807 steam heat rear pipe connections today as I was on Fire & Drive. This is to report back that the clasp connection and pipe clamp is correctly aligned for attachment and links up to the Chocolate and Cream coach stock easily. We briefly tested the pipework under pressure and there were no steam leaks at the fixed pipework gasket joint.

The Condenser coil in the cab is leaking and it does appear to be a pin hole near where the pipe bends away from the union. It is not a problem as the "T" cock allows the other circuit  to be used. The hole is tiny but steam and oil can be seen to exude if you look hard enough or are lucky to catch it in the right lighting situation.

We had to replace the gauge glass tube and rubbers today as it started to leak heavily on our second run from Cheltenham to Gotherington. Replaced in the station at Gotherington and no further problems.

As usual 2807 performed very well throughout the day and all the F&D participants went away very happy."

Saturday 12th
Gilbert reported:
" Jamie has reported loss of vacuum today. I asked him if it was the coaching stock, but he said No, it happened when running light engine."

Stuart came down from Lancashire and found Fred, Gil and Geof in the siphon van at Winchcombe. He says: "The strange triangle held by Gil is one of the parts being manufactured that fits on a door interior and allows access to the opening lever from the outside.  The chaps were also doing some filling and painting of the exterior new panels and internal vent slats." 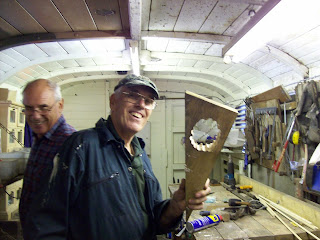 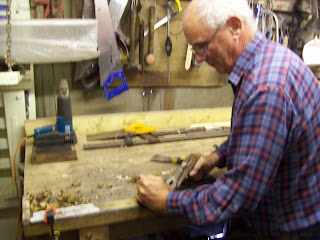 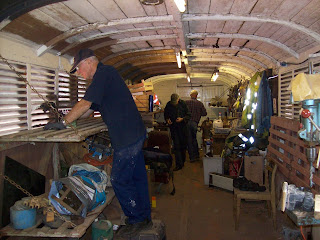 Monday 14th
Bruce reported:
" I went to the Queens Award for Volunteers presentation today, John T was there also.

It seemed to go Ok despite the rain showers.  I didn't see the Queen though but Timothy West and Prue were there.

While I was there I looked at the roster. 2807 is on the service train on Tue, Wed and Thur followed by Fire and Drive on Fri, she is also rostered for Thomas on Sat and Sun.

There was a report last week that the right side clack was leaking. This has been crossed out by Mark Y and changed to the right side injector valve leaking.  We know about this as it has been leaking slightly all year and we already have it on our 'to do' list."

Tuesday 15th
Email from Maxine: " Dame Janet [i.e. Lord Lieutenant of Gloucestershire, Dame Janet Trotter DBE] has expressed an interest in a foot scraper, dated 1943. Can you let me know if this will be possible."

Wednesday 16th
Fred, Gil, Ray and Bill were all beavering away on the siphon van restoration at Winchcombe.

Gil actually started the day at Todders with Bruce.  They were examining the pony truck on the newly-arrived 38xx in the yard.  Apparently its 'ticket' expires at the end of this month.  They went in search of drawings, too.

Dixie finished off finding electrical cables and tagging them all.  Then he joined me in cleaning (more) rail chairs.  He decided to get one as a present for his brother, whose birth date was May 1945.  Well, talk about luck!  We do have a May 1945 rail chair, so we cleaned it up.

John G got stuck into painting rail chairs.  He'd completed 10 tops (in enamel) plus 6 bottoms by end of play.

At the end of the afternoon, we had lost Bruce.  We thought he might have gone home (someone heard mention of him going to do a drawing); but it transpired that he was "helping" the department chaps in the shed finishing off some of the flooring.  It doesn't look like "our" shed, now that 3/4 of the floor is covered in concrete!  :-)

54 [JC]: Steam leak on back of Y-splitter on fountain.
{I'm sure this was reported before?  … and it turned out to be the condensing coil?}

56 [JC]: Vac train pipe losing vac when light engine, res[ervoir] at 22"
{This happened once before.  It seems to be a random event, happening once or twice per year.  It could even be a poorly-connected vacuum hose after uncoupling.  No action proposed.}

Loco Roster
2807 is rostered for every day up to Sunday 20th Sept.