Wednesday 27th
Gilbert made a flat metal template to the same diameter as the new bush, such that when the pony frame is heated (to expand the hole) we can gauge the size vis-à-vis the actual bush (without having to risk getting it stuck in the hole).  He also removed the front cover from the LHS piston valve.

John G went round painting things.  Cleaning and painting the pony wheelset took all morning and some of the afternoon.  There is also a rail chair that we have made to be set between the tracks at Winchcombe to tell the Santa Special driver where to stop, and John painted that in Signal Red.  Finally, he touched up the numbers on the buffer beam. 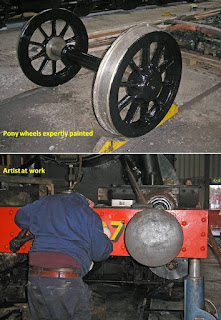 Just before end-of-play, John helped Bruce lower the loco frames off the jacks.  The frame has to be raised for the reamer to get through the hole …

… that Bruce was reaming all day long!  Finally, he has reamed it out to the required size for the new pin to fit.  Below this hole is the one in the pony  frame that needs a new bush.  To fit the bush we think we will have to heat the frame to expand it, because it has to be a tight fit, of course. 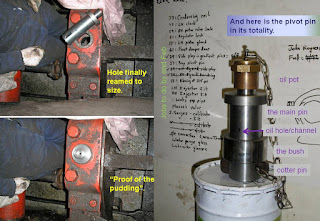 I decided to tackle as many small jobs as I could, because we only have 4 weeks left to get the work done, loco steam tested and ready to run!  I refitted the section of running board to the rear of the LHS valve (Bruce had noticed two bolts missing from it);  fitted the LHS front cladding on the cylinder;  filed a shade off the RHS running board where the rocking shaft arm had been clobbering it;  fitted the vacuum gauge (but can't fit the pressure gauges until they have been tested);

Bruce reminded me of a suspected steam leak from  the pep pipe (aka slacking pipe - in the cab), so I inspected the pipe twixt pep valve (in the cab) and steam feed pipe (from injector to top clack) and discovered that the pipe had been rubbing against platework beneath the cab.  So, the pipe had to come off.  There appears to be a minute split in the pipe, but Carpo says to hydraulically test it to see how bad it is; it may be possible to simply silver-solder it up (and then move the pipe away from the side!).

Saturday 30th
Today was tremendously successful - we really felt we had achieved something.  Why?  Because the wheels are back on the pony!

There were two primary activities converging on assembling the pony: finishing off the underkeeps; and getting the pony frame together.  David and John T spent most of the day completing the straps that hold the underkeeps up.  David had already cut these (4 of) to correct width with neat edges at home, and now these needed cutting to length and holes drilling in them for the retaining T-bolts.  Inevitably this was not trivial, as the bolts turned out not to have long enough threads, and David had to die-cut them to length.  The straps have to butt up to the four tabs on the underkeeps (to prevent the underkeeps from moving sideways), so getting the holes positioned accurately took time, too.

When they had completed that work, we could press on with pony assembly; meanwhile David and John tackled the first of four fitted bolts on the RHS rocking shaft bracket.  The bolt hole was reamed to within 1 thou of the bolt diameter and the bolt was then persuaded to go home!  This turned out to be challenging, and David recommends not being quite so tight on the next three!

Bruce is concerned that the 1/32 inch freedom ("slop") allowed on the pony pivot pin will only allow the pony wheels to lift by about 1.5 inches, which is a problem when being loaded onto a lorry!  Bruce sought the opinion of various oracles, but didn't come to any conclusion.  Further investigation is required.

Gil had ordered oil pads to fit in the underkeeps.  These suck up oil by capillary action and rub it on the axle journals.  However, we think the ones delivered are the wrong sort!  Gil & Bruce to sort this out ASAP.

Alistair and I began the day by moving the A-frame down to position it above the pony frame.  Then Alistair raised the frame and we swung it round to give access to the pivot point where the new hardened bush had to be fitted.  We then had to wait until Carpo had time to act as Lucifer.  It took less than 5 minutes for him to heat up the frame; Bruce slipped the bush into the hole, and with very little persuasion it slid into place.

Meanwhile, much shunting was required in order to get the pony wheels from Road 6 onto Road 7.  With help from various Loco Dept chaps, chivvied on by Clive, 4270 and Foremarke's tender were shunted out, and then a few of us pushed out the wagon (which is under restoration) to free up the Road.  The wheels were shifted across from Road 6 by fork-lift; deposited on Road 7, and rolled carefully down to the frame.  Ray O'H was hovering around with his camera, so photos of this activity may appear on the Loco Dept Blog next week (see http://gwsrsteamloco.blogspot.co.uk/).

Alistair and Mike cleaned and oiled various parts of the axle; boxes and frame.  The final parts of the axle boxes were assembled (i.e. top cover and rubbers).  Eventually, they were ready to fit. 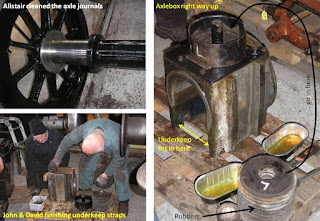 This is a bit of fun, because if we were to just balance the axlebox on top of the axle, it would (obviously) swing round and drop off!  So they had to have a pile of wood underneath to prevent them from rotating on the axle.  Alistair again was in charge of the lifting, as the frame took to the air.  I was steering at the sharp end, while Bruce and Mike were manipulating the wheel end. After much wiggling, jiggling and persuading, the frame did drop onto the axle.  Job done - almost! 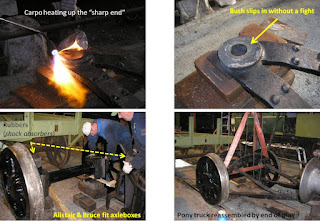 Bruce compared the height of the top of the frame to axle centre with the drawing, and it appears to be 1.5 inches too high.  It has clearly been too high while in service for the past five years.  Nevertheless, we shall verify this measurement next time, and if appropriate we can lift the frame again and remove one or two rubbers.