Monday 4th Jan
Having failed to complete the sand box on Saturday, it irritated me so much that on Monday I trotted off to Todders and fixed the thing!  I drilled through the split-pin hole and got that fixed.  Then there was a linkage from there to the operating lever - again, a split-pin played up!  I got a new pin, cut it down to size and fitted that, too.  The delivery pipe was the last bit to fit.  Then I tested the whole mechanism, and it works (well, it left a little pile of sand on the rail when I turned it to 'open').  Enough for today! 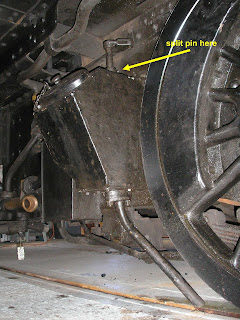 Wednesday 6th
I didn't see much of Bruce today - he spent all day (apart from tea break & lunch) in between the frames, reaming out the holes in the pony truck bridge piece.  By end of play he has got the top hole to within 2 thou' of being perfectly circular.  We now need the new to-be-manufactured pin to be completed and delivered so that great care can be taken in matching the hole to the pin.

Gilbert & Dixie worked on removing the RHS valve and link rod to the rocking shaft.  The whole rocking shaft unit appears to move when the loco is in service.  This might be due to the securing bolts not being of the "fitted" kind; or it might be due to play in the pin that connects link to rocker arm; or play in the brass bearing of the rocker; or a combination of some/all these things!  So, it has to come apart.  Separating the valve spindle from its little cross-head was the first challenge.  That took all morning (because of a taper).  Then there was not enough room to release the link from the cross-head (because the slidebar bracket is in the way); which meant that the spindle had to be pushed through (and that meant belting it with a 'persuader'!), to push the link back to the frame and pull its tapered pin free at the other end!  All was achieved by end of play. 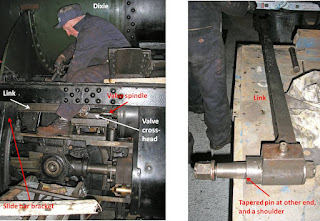 Bruce mentioned that the brass bonnet was only held on by a couple of bolts.  It had been fitted in a hurry by the loco crew - I can't quite remember why we hadn't had time to replace it.  I speculated on why all bolts had not been fitted … and I leave it to you to work it out from the photo!  :-) 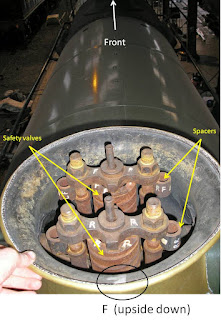 While up there, I remembered that the safety valves have been reported as blowing off at 215 (instead of the correct 225 psi).  John had noticed that it is the rear one that blows at 215, so we aim to adjust the spacer before she goes back into service.

John G helped me take our display board down (from the car park), ready for it to be cleaned and re-done for the 2016 season.  Then John tackled the surface rust that had formed on all of the coupling and connecting rods.  He used wire wool plus oil to clean them and give some protection. 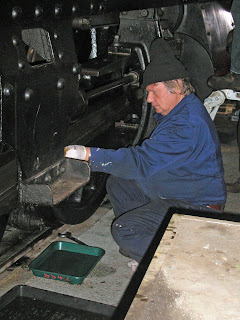 Saturday 9th
We set Brian on steam-cleaning things.  There were a couple of sections of running board that were really grotty, and I unbolted two more for Brian to clean.  Funny, though, there seemed to be more to clean than we had removed … the Dinmore Manor group spotted Brian with the steam cleaner, and started adding their own bits to his pile!

David brought two "dishes" to fit on the lubricators for the pony.  The original ones were of the wrong type- too small.  Bruce assembled one, but we didn't fit them on. 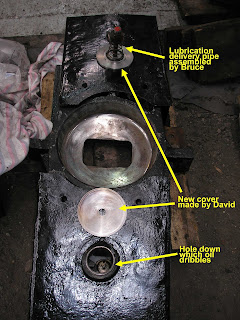 Bruce and John T spent much of the day examining the pony axleboxes.  John checked the bearing lubrication, and then assessed what material is required for two strips per box to hold them in position.  Bruce measured various components to work out exactly what needs to be done. 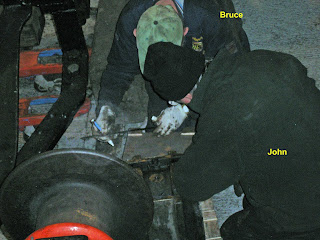 Adey [Loco Dept] removed all of the tender brake blocks with a view to machining up the new ones to fit.

Gilbert & David concentrated on the RHS valve, finally getting it out by the end of the day. 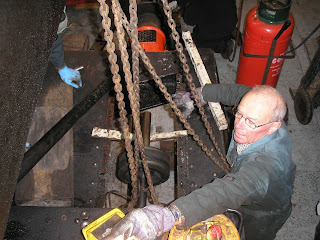 I began by removing one of the bolts that fixes the rocking shaft unit to the frames.  We think these should be fitted bolts, and they are not.  David & Gil discussed the best way to make new bolts to suit.  Brian removed the top cover from the rocking shaft so that the bearing shells can be examined for wear.

Finally, I went inside the firebox to inspect the nuts & rivets around the grate area.  All seem OK.  I cleaned these up and applied aluminium paint (750 degree heat tolerant), though there was no sign of the paint that I applied last year, so whether it does any good …

There is now a list of outstanding issues from the loco report card, most of which we shall address in the next six weeks.