Monday 12th
Unable to needle-gun rail chairs on Saturday due to rain, so had to pop down for an hour to clean two orders. Tripped the electricity in the box - don’t know why. Key to the power distribution board was not where it should have been, so I pulled out another plug and used that socket. Drill with wire brush attachment went on strike - loose or broken cable. No time to repair, so dumped it on the workbench and used another … At least these two chairs now have black bottoms.

Wednesday 14th
John G began by applying primer coat to the two rail chairs. I joined him in the container to paint the lettering on the chairs in the production line. John Mayell snook in, pinched the one black boot scraper and ran off with it. John G wrestled him to the ground and extracted the money for it.

Last week, John G had refitted the ferrules around the inspection plugs in the cab … except that (allegedly) Gilbert had lost one of the fixing bolts. John found one to fit and hence completed that task. As Head Painter, John was then tasked with slapping some black on those fitted bolt heads that David & John T completed last week. Thereafter, John G began to polish the brasswork in the cab, but ran out of polish and time.

During the removal of the spring compensating beam last week, Bruce had discovered that the piece of angle bracket to which a chain is attached (yellow arrow, left) was loose - though the nut was seized solid. The chain, by the way, is purely a safety measure: if the brake stretcher should break free (e.g. the nut fall of its end) the chain prevents the stretcher from fouling the rail/wheel/track.

Bruce struggled to find a spanner to fit the “standard” ¾” Whitworth nut; I think he filed the nut down to fit the spanner in the end (though he denied that that’s what he was doing … with the nut in the vice and the file in his hand …).

Gilbert went round spreading grease everywhere. Since this grease is coloured red, it’s a tad hard to disguise (see red arrows in photo). 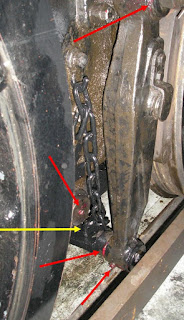 Gil’s convinced that grease would not go into the nipples on the other three compensating beam pivots. I guess these will have to come off to see if these pivot pins have seized in their beams, too! A job for Winter Maintenance.

Saturday 17th
For his homework, David is making a gadget for measuring the valve timing. He brought the first
part in today to check the alignment of the holes. The first thing he discovered was that the studs
are not necessarily in exactly the same positions on different 28xx locos! So, he had to make the
holes a bit bigger.

The angle sits on three studs in the front of the valve chest (yellow arrows, right). This is just the first part. There will follow pieces that allow the movement of the valve rod to be monitored and marked. We will be able to determine what movement there is relative to the centre point, and hence if the valve is too far forwards or back. If it is, then steam will be let in (and also out) of the valve at lightly less than the optimum time. 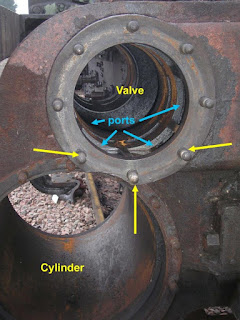 I’ll keep you posted as more bits of the gadget are made.

After checking this, David played with our compressor for a while (neither of us spotting that the exhaust valve was wide open - which kind of limited the pressure that the compressor was able to build up!). Once up & running, David made up for lost time by needle-gunning seven rail chairs.

Meanwhile, Gilbert had been poring over diagrams (as is his wont), finally deciding that he would check the play in all of the coupling and connecting rods.

David (as if he had some fantastic control over the space-time over the continuum) also assisted Gil in taking some of those measurements. 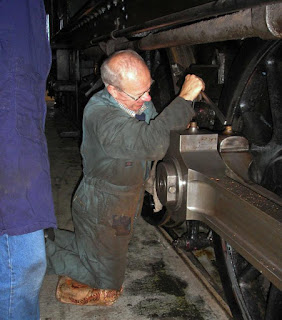 I, on the other hand, could only be in one place at a time, and that was making … boot scrapers! I had an order to complete, and then I wire-brushed five of the seven that David had needled. I gave up at that point and saved the last two for next time … and yet … David was now painting the bottoms
of these five with black paint! How does he do it?