News from Fred about the siphon van
“We have completed the repair of the wooden ceiling trunking holding existing cabling to internal 240V power sockets. This will also carry cables for the new LED low voltage lighting in the coach. We have trial fitted one lamp and resisted making it sparkly and multi-coloured for Xmas.” 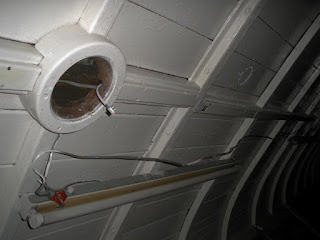 Fred is greatly saddened by the fact that, now door handle holes are covered and the side vents are backed with plastic sheeting, the robins have been unable to gain access. We are all very caring about the environment and the wildlife, you know.

Wednesday 22nd
Fred, Bill, Ray and Gil were all working on the Siphon, once more. Gil was shaving a smidgeon off some of the doors to get them to fit better. The others were taking advantage of the weather and fitting the door stops around the outside.

We’d had a cylinder of brass delivered to Todders. This is from which to make new bushes for the coupling rods. Some of the bushes are out of tolerance (which is perhaps not surprising after 8 years of use).

Bruce brought in his homework, which consists of two clack spanners. He donated one to Foremarke Hall. They are made specifically to fit the square ends on the top clack valves.

Bruce suggests making a similar spanner for the blow-down valve (which is square-ended, too). The issue with the blow-down valve is that if you open the valve and then accidentally drop the spanner, you can’t clamber underneath to retrieve it! Hence, a spanner of this type is safer to use than an open-ended spanner. 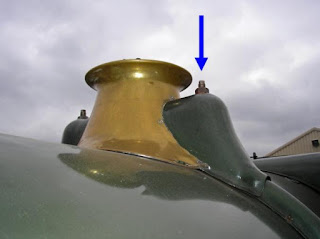 Saturday 25th
Rob and I started off playing with the band saw. It made a peculiar noise when we started it, and then the band fell off! The first attempt to fix it also failed, whereupon I slid quietly out of the door and let Bruce take over! The two of them then fitted a new blade and squirted various bits with lubricant. This seemed to do the trick, as Rob was then able to saw up a couple of pieces of wood for me.

We three then moved on to the inevitable …. however, just before lunch, our compressor decided that it was not happy being left alone in the cold. It tripped the fuse. We decided to take lunch and  investigate afterwards. The problem seems to be that there are times when it really struggles to start up. Usually, this is first thing in the day when someone forgot to release the pressure from its last use. This it does not like! Today, however, it may have stood idle for a while, after I had been using it; and when Rob took over, it was still pressurised and cold, and ….. the solution was to release the pressure and start again. This worked, and the compressor behaved for the afternoon.

Gil & Bill joined us for lunch. I think they get lonely at Winchcombe.

In an idle moment or two, Bruce decided that the pile of cables stuffed under the shelf in the container really needed tidying up. So, they are now sorted, rolled, tied and hung up. How long before someone takes one, uses it and then stuffs it back under the shelf?