News from LLangollen
There are no more services at Llangollen until the Santa trains begin, in December. So, 2807 ran on the weekend of 4th & 5th November, but there will be nothing more to report for four weeks!

Rather than go on and on about boot scrapers , I’ll take a break until something of greater interest occurs. However, we have 15 boot scrapers “on the shelf” and more in the pipeline; the Flag & Whistle have sold 94; John got fed up with painting them GWR green, so painted one in LNER Darlington Green; and I’ve just had a phone call from Germany ordering a September 1946 one!

Bruce pointed out on Saturday that in the last update, Tom Peacock called 2807 “the Victorian cart horse”. But Victoria died on 22 January 1901, which was nearly five years before 2807 came into service! Edward VII was on the throne (maybe not literally) when 2807 rolled out of Swindon works.

Fred, Gil, Ray and Bill were all at Winchcombe working inside the siphon. They have just bought and/or refurbished some “door furniture”. 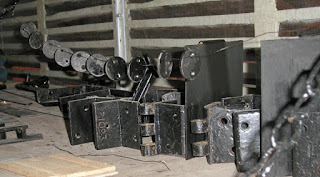 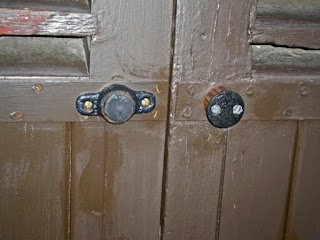 The inside of the siphon is looking very smart. Still some cowls to paint and fit to the roof. Some boxes have been acquired as part of the museum feature (being for the fruit section). 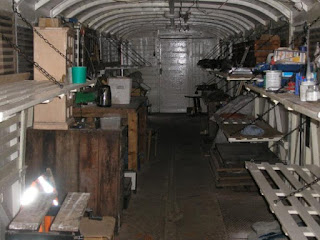 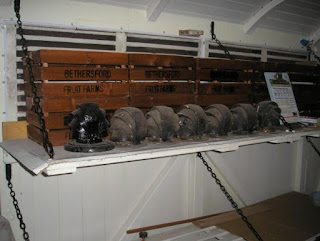 Saturday 18th
Bill was first at the siphon; Fred and Gil shortly after. I spoke with Bill because I called in at Winchcombe to search for a 9-46 rail chair (q.v.) on my way to Todders. Unfortunately, by the time I reached Todders, it had decided to rain!

John T was first at Todders, soon followed by Rob. They had opened up, and started before the rain reached them. John had to abandon needle-gunning because the rain turns the rust into brown soup. Rob pressed on with painting inside the container, but much to his chagrin, the combination of cold and rain caused condensation on the rail chairs which brought that activity to a halt.

Bruce decided that the angle-grinder (which had previously only worked when you waggled the cable and got it in the right spot) needed a new and longer lead. That occupied him for a while (especially when removing the PAT tags from the old lead to the new).

I get on my high horse about people using the trolleys as work benches, and Rob and I brought a large pallet into the shed and removed the vacuum cylinder parts that have been sat on the trolley for weeks onto the pallet. With the trolley now free, we moved nine rail chairs (that I had brought from Winchcombe in my car) up to our pile near our compressor.

Fred, Bill & Gil joined us for lunch. Then after putting the world to rights, we decided that the rain really had defeated us. So we went home! 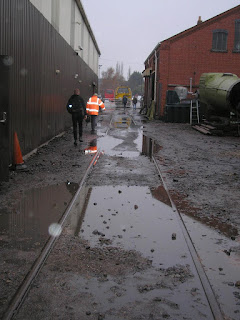