Wednesday 27th
Alex and her happy band had already cleaned much of the loco, but there was still some brass and copper than could do with a shine. The trouble was, we had been moved out of the shed into the rain for work to be carried out on the shed lighting! Furthermore, they were pouring concrete all morning just by the track that we were on, which stopped us from moving. Eventually, we were shunted back inside and work began.

Fred started by wiping the rain water off the boiler top so that he could sit up there and polish the brass bonnet. 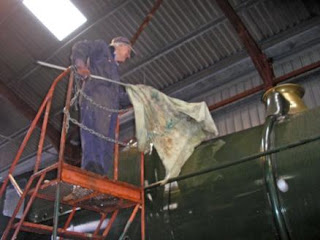 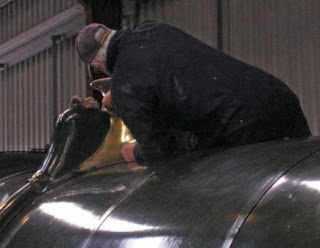 John G, Bruce and Gilbert all crammed into the cab.

John started around the gauges, polishing everything that would shine. Having moved across the cab, he finally attacked the condensing coil in the cab roof, which appeared to have been painted. If it was paint, it had flaked off (due to the heat, of course) and looked a right mess! So, that had the John-G treatment, too. 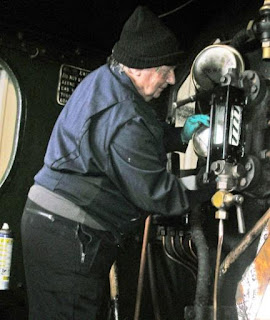 Gil fitted extra packing into all five of the sight glass taps on the hydrostatic lubricator. This had been making a mess with its oil, which might have been leaks or it might have been duff glass (too thick walled). In due course, Gil became gopher for Bruce. 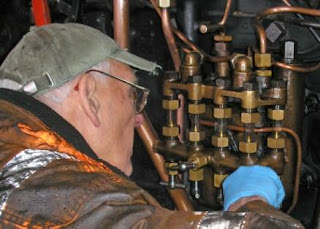 Initially, however, Bruce tackled the pep pipe tap that had been dribbling. He lapped that in. Once that was done, he moved on to the next issue - oil feed pipes loose. People had tried tightening their nuts, but to no avail, so Bruce had them off and inserted some copper wire as packing. 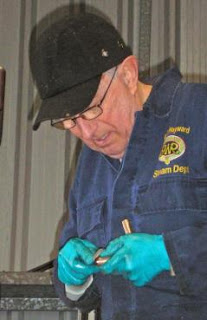 Being stuck between the frames beneath the boiler, it is at this point that it is quite handy having a gopher on the outside! 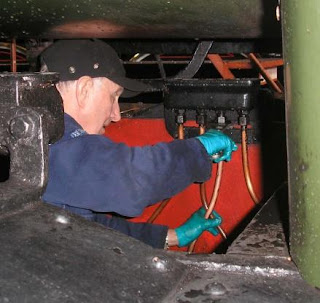 John G ended up finishing the cleaning of the connecting rods. 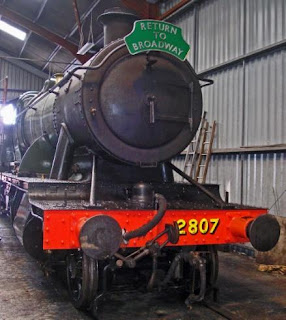 John T and I were on boot scraper production (in high hopes of flogging a few over Easter). John wire-brushed and angle-ground a couple and then slapped black paint on the bottoms of five.

I attempted to needle-gun one, but there wasn’t enough time between showers to finish it! Rain + rust = brown soup.

Being concerned about the top clack (waterfeed) valves passing steam by, Bruce and Gil went in  search of spares in our pile of pieces. Two were found, and Bruce has taken them home to examine and determine if it is more sensible to replace ours rather than lap them in yet again. He has an idea that the gap within the valve gets larger the more you lap them in and it might by now exceed the specification. That might explain why they don’t last long before passing steam again.

Saturday 31st
Awful weather plus loco in service meant that there was no point in coming to Todders. However, I did paint primer onto eight rail chairs. Gilbert was on PR duty at our stand in Winchcombe.

2807 performed almost faultlessly (well, you can argue that she performed faultlessly, it’s just that things wore out! Issues logged to date and outstanding are:

Friday 30th
At 13.03 (three minutes early) 2807 approaches Broadway for the very first time … and the heavens opened up! Fortunately, the weather had managed to stay dry for the morning, but BBC weather said it would rain at 1 o’clock … and it did! 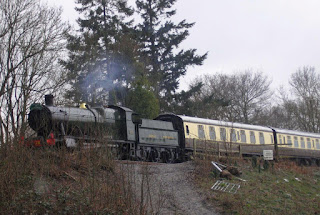 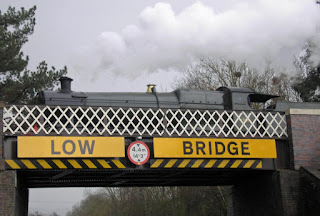 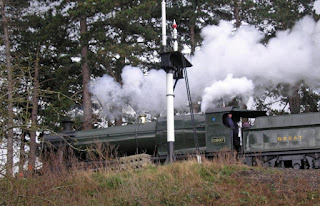 Timeline Photos posted the following on Facebook, of 2807 as she arrived for this first visit. 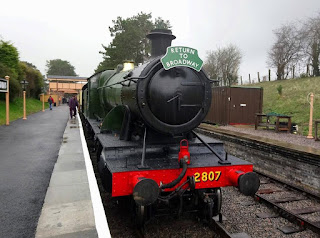