Saturday 2nd
As forewarned - it was washout day! David and Gilbert spent the morning (and some time after lunch) getting out a selection of washout plugs (as arrows: yellow = in; green = out). 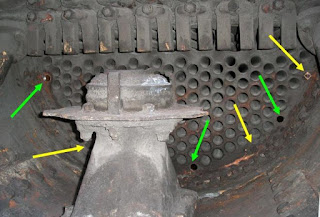 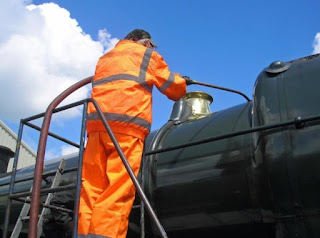 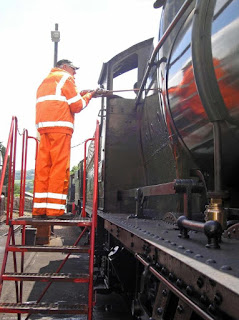 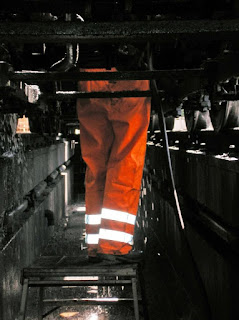 John T didn’t manage to get into a picture.  John managed to start cleaning up some plugs before lunch, but thereafter he was in charge of the water pump all afternoon.

Thanks also go to JC and Stuart C [Loco dept] for their assistance - both shunting, and playing with the hose & water tap.

Wednesday 6th
Now we have to put it all back together again! Mark had a good look round - inside & out!

Would you believe that there was still an ancient stay inside the boiler? There was also a blockage in the left side that had to be washed out again. A couple of stay nuts in the firebox will need replacing soon. The ones closes to the firebed burn away, and must be replaced before the stay’s thread gets damaged. 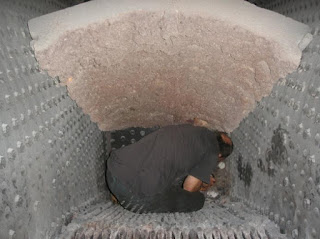 Also, the side double fire bar in which a break had previously been temporarily welded pending delivery of a new one had broken again. New front side bars were fitted. 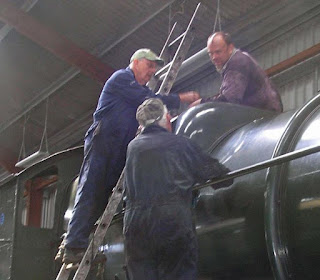 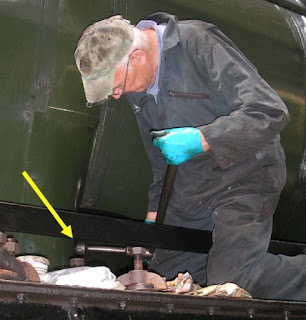 John G acted as general support engineer (aka gopher) and - here is seen cleaning the threads on a washout plug. In spare moments he managed to paint four black bottoms, too. 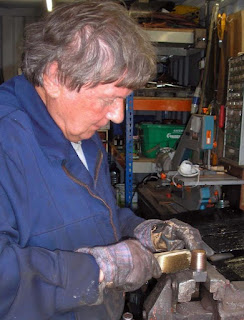 I began by refitting the (water) gauge frame assembly. Then I snook off to wire-brush three chairs that had been needle-gunned and then abandoned.

P-Way made three deliveries of further rail chairs (predominantly GWR ones) during the day. Most are “through-bolted”, which means that they still have their rusted bolts in situ. Much cutting-off thereof lies ahead!

Later, I assisted Gil by tightening the plus in the cab. Bruce called it a day at 5 pm. I abandoned Gil at 5.30. He was quite keen to get all but the highest of plugs back in their holes to enable the boiler to be  filled ASAP. Mark had hoped to do a steam test on Saturday, but unless someone can finish off the plugs and fill the boiler, there won’t be time to light a warming fire on Friday.

Off-line, I have been having an email exchange with Alan G. who bought a Midland railway boot scraper. We have a few MR rail chairs dating between 1885 and 1901 (plus some 1921 of less excitement). Most have no manufacturer’s name. However, the 1901 has “TBS” which is Taylor Brothers (Sandiacre) Ltd; and the 1899 says “ES&Co”. This latter has me perplexed. There was a company of iron founders called Edward Sheldon & Co during the 19th century, based at Coseley (north of Dudley) who did use the ES&Co logo. However, they appear to have focussed upon domestic ware, in due course being manufacturers of Cannon cookers, for example. Curious!