2807 has been in service all week, so we have not been able to do anything on the loco.  As a result, Wednesday was cancelled.

Saturday was also cancelled because 2807 was in service still.  Also, I had two trainee pyros to teach the art of lighting up.  However, one backed out at the last moment, so I cancelled that Saturday activity, too!

Thursday 3rd July
I did a round of the cafes and discovered that the F&W had sold 6 boot scrapers and the Coffee Pot had sold 4.  So, I restocked them both.  Additionally, I had an order for two to be collected from my house on Friday.  That made a very useful income.  Which reminds me: 2807 performed on 8 days during June, which is the first earner of the year!

Saturday 5th
Despite today being cancelled, I decided that I needed to try to replenish some boot scraper stock.  I had attempted to fit brushes to an LNWR chair, and discovered that the brushes are so tight that the wooden wedge (that holds the brush in place) had to be no more than 10 mm at the blunt end.  I have to keep a range of sizes, from 10 mm to 15 mm, to cope with different styles of rail chair.  There were no 10 mm left. So, the day began with much sawing of wedges.  I produced a heap of 10 mm and 13 mm (which is the commonest, and hence had also run out).  Thereafter, I fitted brushes: 3 x LNWR (black); 4 x BR (crimson).

Gil & Fred popped in for lunch.  It's more comfortable in the TPO than in the siphon van at Winchcombe.  If you're lucky, we might be able to show you inside the TPO at Toddington at the end of the Supporters' Day (28/07/2014).  Then they buzzed off again. 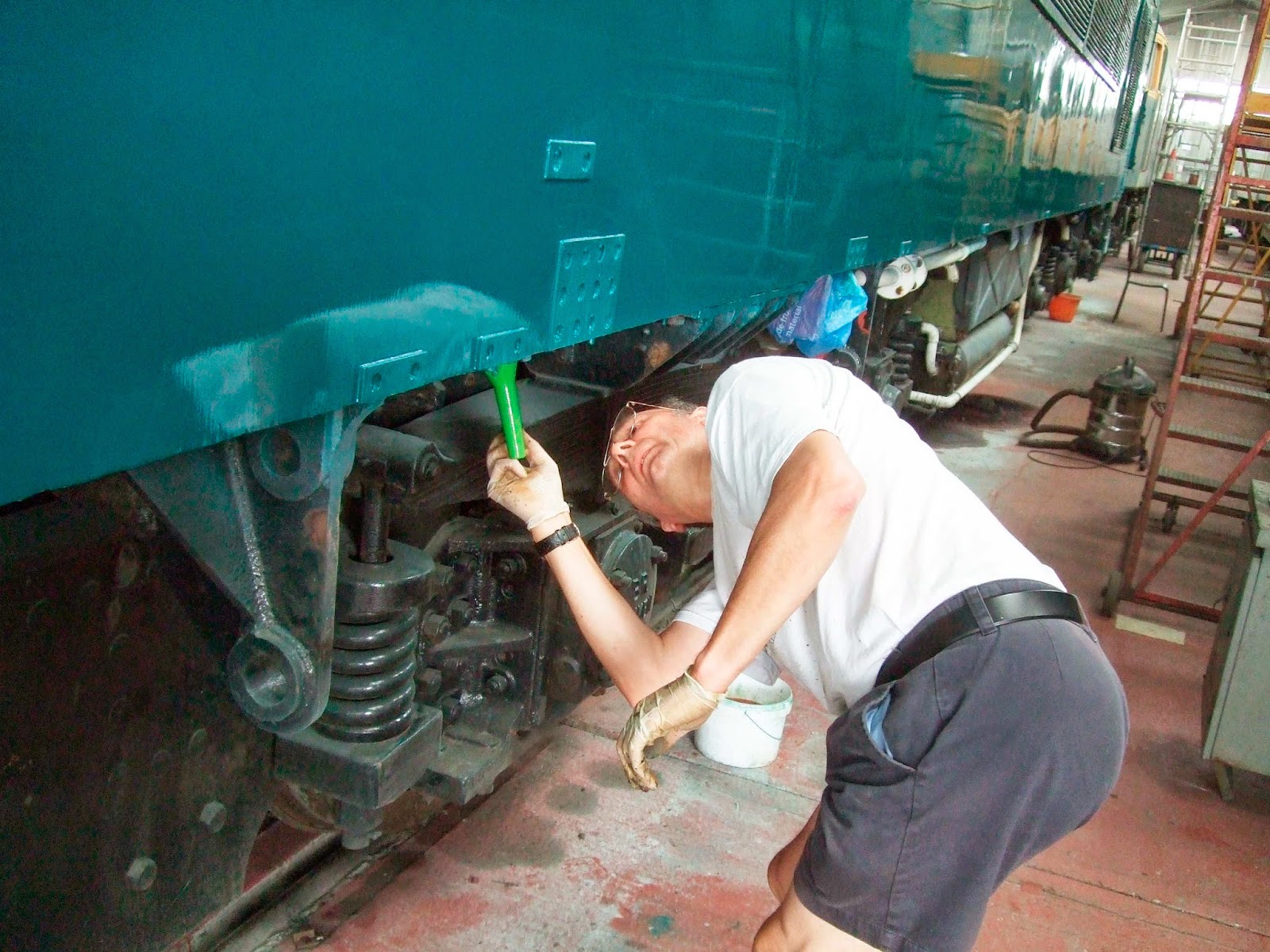 Sunday 6th
I toddled around for various reasons: Winchcombe café had already sold 3 more boot scrapers.  A carefully timed visit saw 2807 pull in and then out.  Sounded great to me!  The cake was pretty scrummy, too.

The F&W had only sold one boot scraper, but I restocked both cafes.

I painted the lettering on the green chairs - actually, two were GWR 92s (not BR(W)).  Then I did a spot more on 45149, before adjourning via the mess coach to check the roster & issues list.  No locos rostered for next week yet!

[--] 3: Condenser T-cock blowing by nut. {Fix not possible until loco is cold}.
[--] 4: Ejector is awkward to shut off.
[IW] 5: Ejector is blowing through.
[IW] 6: Brake whistle chain bracket broken. {David has taking this to braze or silver-solder}.
[IW] 7: Vac pump spindle out of alignment. {Examination did not identify any adverse effect, so my response would be "yes, it is.  So what?"!}
[MY] 10: Both clack valves passing (top feed delivery pipe always hot & pep pipe pressurized).  {Again, we were aware last year; couldn't do anything while she was at Tyseley, and can't do anything now until she's cold}.
[SN] 11: Safety valves blowing off at 210.
[KH] 13: RH injector steam feed pipe collar above flange blowing steam.
[JC] 14: Train pipe vac dropped on several occasions.  OK the rest of the day.  {This happened once before, and we could not repeat the symptom or identify the fault}
[SO] 15: Fizz from 2 rivets at bottom back left firebox.
[JW] 16: All tender horn ties loose.  Pulled up with spanner, but need slogging.

Monday is the only day that there is no loco in service, so potentially we could slog the horn ties (issue no.16) and refit the whistle bracket (assuming David has fixed it) (no.6), but she will still have 10 to 20 psi pressure, so nothing else could be fixed.  So, it's probably not worth it.