Sunday 13th
I passed by at teatime, and 2807 had just come off the last train.  So, I asked the driver [Steve B] if all was well.  He said yes, except that the left-hand crosshead was using a lot of oil and running warm.  I had a feel, but couldn't detect any temperature difference.

Tuesday 15th
You may recall that someone went overboard with the whistle during the Thomas event and broke its bracket.  GWR locos have two whistles, with different tones.  The higher-pitched (smaller) whistle is used to warn people - typically to warn that the loco is about to move; is entering a tunnel; is passing rolling stock where staff might be nearby out of sight; or approaching a crossing.  The lower-pitched (larger) whistle is rarely used, because it is an emergency whistle.  This might be used, for example, to tell the guard to apply his brake.

Anyway, David had taken the bracket home and decided to make a new one.  The original one appears to have had the pipe section soldered onto the retaining plate.  David has made a new steel plate plus two straps to clamp the pipe to the plate and brazed it together.  It takes two people to fit it, because it bolts to the cab roof, and someone (in this case it was me) has to climb up onto the roof and wield a spanner while the "fitter" does just that, in the cab.

Tuesday was the only day that David could make this week, so I met him at Todders.  After helping fit the guide plate and the chain, I did a spot of rail chair painting to while away some time. 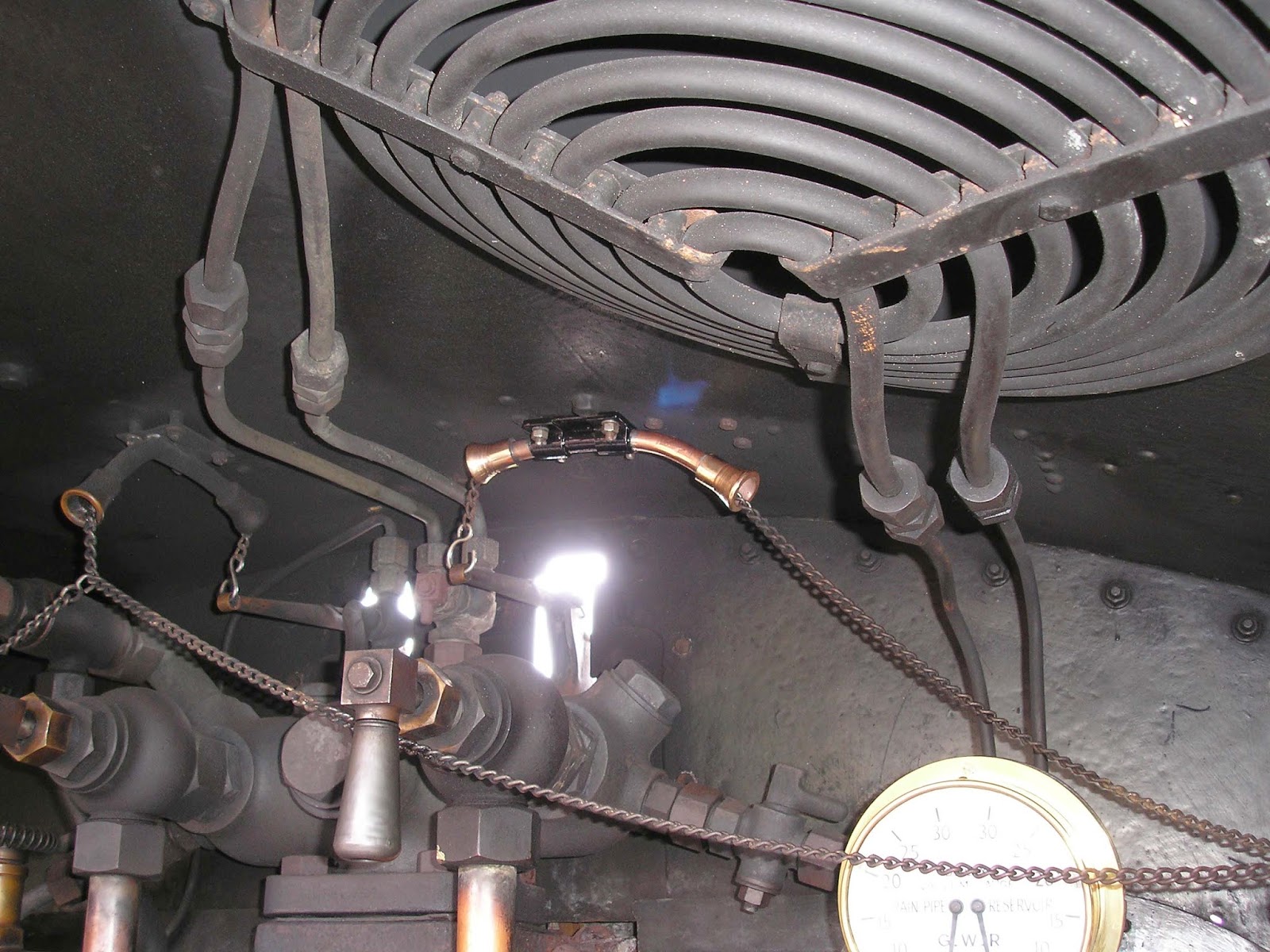 Wednesday 16th
Bruce & Gil had a play with the loco.  In particular, the regulator handle is a bit loose on its shaft.  It can't come off, but the square end of the shaft and the square hole in the handle are not exactly a perfect match.  So, Bruce had made some small shims to try to wedge the handle firmly on its shaft.

Re issue 7 (Vacuum pump spindle out of alignment): Bruce has examined the clearances when the pump is at each end of its travel, and there is no fouling or rubbing.  We were aware that the spindle was not perfectly aligned, but it is within tolerance.  Anyway, to alter it is a major job of cutting, aligning & welding its supporting bracket (which also happens to be steps up to the running board).  No further action will be taken.

Re. issue 10 (clack valves leaking), this creates pressure in the pep pipe (aka slacking pipe - used for washing the coal dust down).  Again, we were aware of this.  Gil has found out that rather than a plain copper seal in the valve seat, there should be something called a "Taylor Ring" which is corrugated:

Meanwhile, I pressed on with boot scrapers, completing three and top-coating six.  I also  took 3 over to the Coffee Pot Café at Winchcombe station to replenish their stock.

Saturday 19th
Appalling weather.  Managed to finish off some more boot scrapers and paint some brushes for the next lot, but couldn't work outside, so gave up at lunchtime.  No one else could make it to Todders today.

Colin reports on the siphon restoration at Winchcombe:

"Went to help clean up siphon so it would be spick and span for the Supporters day.  Fred was on his own and the weather had turned into a monsoon.

The good thing is the roof is sound but as I ran the brush round to clean up I noticed water all over the floor in the middle of the coach. This was caused by a faulty piece of wood by the new cladding which was quickly filled in by Fred with some plastic padding and now seems dry.

We painted some of the inside as it was so wet outside.  About 12.30 it stopped raining so we rushed outside and put up a safety rail on the steps, as the existing rail  is on the wrong side now.

It looks good, not perfect but it will do the job.

I also cut off the planks on the steps platform so it was safe and looked right.  In between, 2807 stopped play as it came and went earning its keep.

It looks really great and sounds it as well.  The bits of the Siphon that are finished show how good it will look when we have completed it.  The roof just looks splendid.

All in all a good day with only two people and bad weather we did a lot, and  as I left a thunder storm started to build up  but I got home before it came;  I beat it up the Motorway I think."